Wall Street Tycoons : Why Are None Behind Bars? 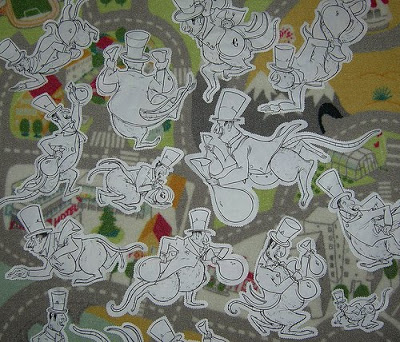 Royal / Capitalist Banker series / mejuan.
Why haven’t any Wall Street tycoons been sent to the slammer?

The absence of what many would call justice stands out all the more because past financial crises always had their villains.

WASHINGTON — More than a year into the gravest financial crisis since the Great Depression, millions of Americans have seen their home values and retirement savings plunge and their jobs evaporate.

What they haven’t seen are any Wall Street tycoons forced to swap their multi-million dollar jobs and custom-made suits for dishwashing and prison stripes.

There are plenty of civil and class-action lawsuits from aggrieved investors angered by the losses in their mortgage bonds, hedge funds or pensions. Regulators have stepped up their vigilance after the fact. But to date, no captain of finance tied to the crisis has walked the plank.

There have been some high-profile arrests and federal convictions of financial giants — such as Ponzi scheme king Bernard Madoff and Stanford Financial Group chairman Robert Allen Stanford. They weren’t among the causes of the financial meltdown, however, just poster boys for an era of lax enforcement, weak regulation and devout faith in free markets.

“A lot of people who are responsible (for the crisis) seem to have gotten awfully rich in the process,” said Barbara Roper, the director of investor protection for the Consumer Federation of America.

The absence of what many would call justice stands out all the more because past financial crises always had their villains. The depression-era had electricity and railroad magnate Samuel Insull, who partly inspired the movie “Citizen Kane.” The savings and loan crisis of the 1980’s had banker Charles Keating. Energy giant Enron Corp.’s spectacular collapse offered the late CEO Kenneth Lay, a Texas crony of President George W. Bush.

Yet there’s no such poster child for the Great Recession, as today’s crisis is now called.

One may yet emerge. The FBI has more than 580 large-scale corporate fraud investigations under way. At least 40 of them are scrutinizing players in sub-prime mortgage lending, which was the first domino to fall and triggered a global financial crisis.

“The investigations are very complex; it’s not something that’s going to turn overnight,” said Bill Carter, a spokesman at FBI headquarters. “They are labor intensive. They involve a review of records.”

To date, the closest thing to a prosecution of a major actor in the financial meltdown is a civil fraud case that the Securities and Exchange Commission brought on June 4 against Angelo Mozilo, the perma-tanned CEO of mortgage-lending giant Countrywide.

The SEC, in documents filed in a federal courtroom in central California, accuses Mozilo of “deliberately misleading investors” by misrepresenting the risk that Countrywide posed. The SEC also accused him of insider trading because he sold large shares of company stock and options ahead of what he allegedly knew was a coming collapse of mortgage lending.

Unless the Justice Department brings corresponding criminal charges, however, Mozilo could be hit with penalties and a ruined reputation if convicted — but he wouldn’t see the inside of a jail cell.

Another big trial is imminent, however. On Oct. 13, a Brooklyn jury will begin hearing the federal prosecution of former Bear Stearns investment fund founder Ralph Cioffi and his fund manager Matthew Tannin.

Two of their hedge funds, offered to mega-wealthy investors and heavily weighted with investments in mortgage bonds backed by sub-prime loans to the weakest borrowers, collapsed in June and August of 2007. Their collapse signaled a gathering storm in mortgage finance that culminated in March 2008 with the government-brokered fire sale of their bank to JP Morgan Chase.

Both men were charged on June 19, 2008, with defrauding investors, passing off as safe the investment in mortgage bonds even though they described the market for sub-prime mortgages as “toast” in their own e-mails. Cioffi also faces charges of insider trading.

Lawyers for both men declined comment to McClatchy, but when their clients were arrested they called the pair scapegoats for the broader financial crisis.

Court documents filed in August show attorneys for the two are trying to suppress evidence that the executives’ special trading notebooks have disappeared. The government suspects that Cioffi and Tannin, or someone helping them, made them disappear to cover their tracks.

Cioffi’s attorneys also asked in August that the presiding judge quash the use of evidence that points to their clients’ lavish lifestyle, including mansions and Ferraris. The documents accused federal prosecutors of “improper appeal to class prejudice.” Tannin’s attorneys joined the motion on Sept.15. 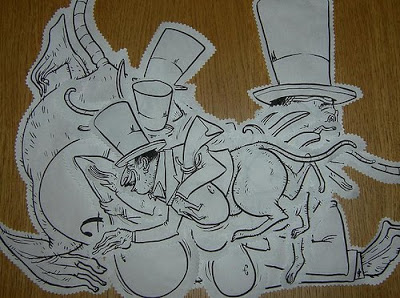 Royal / Capitalist Banker series / mejuan.
Class prejudice against bankers is what many Americans feel, evident in the death threats made against some former or current executives at insurer American International Group and other financial firms earlier this year. Wall Street switchboard operators at some institutions no longer provide addresses to phone callers.

Americans are angry because the suffering on Main Street is a spillover from the excessive risk taking and lavish compensation of executives who invested on behalf of the ultra-wealthy. Investors seeking outsized “alpha” returns turned to Wall Street, both seeking to make a short-term killing even if doing so eventually brought the near collapse of the financial system.

President Barack Obama alluded to this on Sept. 14 in a New York speech to commemorate the anniversary of the collapse of investment bank Lehman Brothers, which sent off a global financial panic.

“We will not go back to the days of reckless behavior and unchecked excess at the heart of this crisis, where too many were motivated only by the appetite for quick kills and bloated bonuses,” Obama said, promising new rules. “Those on Wall Street cannot resume taking risks without regard for consequences.”

There are persistent but unconfirmed reports that the FBI and grand juries are looking at the e-mails of executives of failed institutions such as Bear Stearns, which pioneered the process of pooling sub-prime loans for sale to investors, and Lehman Brothers, which was a leader in these toxic products when it collapsed.

Records from AIG, which the Federal Reserve saved from collapse on Sept. 17, 2008, are also thought to be under review. The FBI reportedly is also looking at rating agencies Fitch, Moody’s and Standard & Poor’s to determine if they knowingly gave pools of sub-prime mortgages AAA investment-grade ratings, the best possible, despite evidence to the contrary.

The lack of any prosecution to date doesn’t mean authorities aren’t investigating, added Ian McCaleb, a spokesman for the Department of Justice.

“There are ongoing cases. But from a prosecution standpoint, it takes a significant amount of time to develop these things. Most financial fraud cases are very complex and it could take a while to unravel the specifics of each case,” he said. “I would characterize financial fraud as one of our top priorities.”

Another possibility is that a new politically appointed Financial Crisis Inquiry Commission could turn up something that leads to prosecution. The 10-member panel, created by Congress this month, began probing the origins of the crisis, has subpoena power and could compel testimony. This could, however, lead to conflicts with ongoing legal investigations.

Another reason that there’ve been no arrests of the perpetrators of the financial meltdown is that agencies such as the SEC, which regulates trading in stocks and bonds, and the Commodity Futures Trading Commission, which oversees the trading of contracts for future delivery of energy and farm products, lack powers of criminal prosecution.

They can bring civil charges that result in fines or pass information to federal prosecutors or the FBI, which under the Bush administration was reorganized to focus less on white-collar crime and more on national security matters and crimes against children.

Legislation introduced in the House and Senate would make it easier for the CFTC to prosecute, especially allegations of market manipulation. Measures would lower the current high threshold for determining manipulation. In 35 years, the agency has won only a single manipulation case, and it’s under appeal. The bills also would give commodities regulators powers to bring criminal cases.

“Folks who do the crime shouldn’t just pay a fine, but do the time,” said Bart Chilton, a CFTC commissioner who’s championed the need for prosecutorial powers.

Because it saves time and money, regulators traditionally have negotiated settlements with bad actors, and fines often amount to a business cost.

That, too, may be changing, however. The SEC on Sept. 14 was hit with a stinging judicial rebuke for its half-hearted efforts to punish Bank of America for alleged disclosure failures in the government-brokered purchase of investment bank Merrill Lynch.

U.S. District Judge Jed Rakoff tossed out a $33 million settlement between the SEC and Bank of America, effectively calling it a fig leaf. The agency, he said, looked as if it was enforcing the law while the bank and its CEO, Kenneth Lewis, got away with a slap on the wrist.

“It is not fair, first and foremost, because it does not comport with the most elementary notions of justice and morality, in that it proposes that the shareholders who were the victims of the bank’s alleged misconduct now pay the penalty for that misconduct,” Rakoff wrote in a scathing 12-page opinion that ordered the complaint to proceed to trial.

1 Response to Wall Street Tycoons : Why Are None Behind Bars?