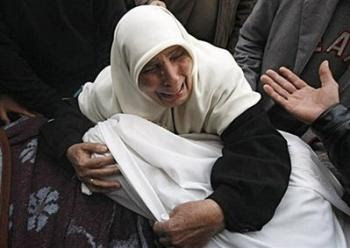 A woman cries as she holds the body of one of her relatives at the mortuary of Al-Shifa hospital on January 16, 2009. An international group of lawyers and jurists said Saturday they would ask the International Criminal Court to probe alleged “war crimes” committed by Israel during its offensive in the Gaza Strip. Photo: AFP/File/Mahmud Hams.
Israel accused of war crimes over 12-hour assault on Gaza village
By Fida Qishta in Khuza’a and Peter Beaumont in London / January 18, 2009

Israel stands accused of perpetrating a series of war crimes during a sustained 12-hour assault on a village in southern Gaza last week in which 14 people died.

In testimony collected from residents of the village of Khuza’a by the Observer, it is claimed that Israeli soldiers entering the village:

If the allegations are upheld, all the incidents would constitute breaches of the Geneva conventions.

The denunciations over what happened in Khuza’a follow repeated claims of possible human rights violations from the Red Cross, the UN and human rights organisations.

The Israeli army announced yesterday that it was investigating “at the highest level” five other attacks against civilians in Gaza, involving two UN facilities and a hospital. It added that in all cases initial investigations suggested soldiers were responding to fire. “These claims of war crimes are not supported by the slightest piece of evidence,” said Yigal Palmor, an Israeli foreign ministry spokesman.

Concern over what occurred in the village of Khuza’a in the early hours of Tuesday was first raised by the Israeli human rights group B’Tselem. Although an Israeli military spokesman said he had “no information that this alleged incident took place”, witness statements collected by the Observer are consistent and match testimony gathered by B’Tselem.

There is also strong visible evidence that Khuza’a came under a sustained attack from tanks and bulldozers that smashed some buildings to pieces.

Pictures taken by photographer Bruno Stevens in the aftermath show heavy damage – and still burning phosphorus. “What I can tell you is that many, many houses were shelled and that they used white phosphorus,” said Stevens yesterday, one of the first western journalists to get into Gaza. “It appears to have been indiscriminate.” Stevens added that homes near the village that had not been hit by shell fire had been set on fire.

The village of Khuza’a is around 500 metres from the border with Israel. According to B’Tselem, its field researcher in Gaza was contacted last Tuesday by resident Munir Shafik al-Najar, who said that Israeli bulldozers had begun destroying homes at 2.30am.

When Rawhiya al-Najar, aged 50, stepped out of her house waving a white flag, so that the rest of the family could leave the house, she was allegedly shot by Israeli soldiers nearby.

The second alleged incident was on Tuesday afternoon, when Israeli troops ordered 30 residents to leave their homes and walk to a school in the village centre. After travelling 20 metres, troops fired on the group, allegedly killing three.

Further detailed accounts of what occurred were supplied in interviews given to a Palestinian researcher who has been working for the Observer, following the decision by Israel to ban foreign media from the Gaza Strip. Iman al-Najar, 29, said she watched as bulldozers started to destroy neighbours’ homes and saw terrified villagers flee from their houses as masonry collapsed.

“By 6am the tanks and bulldozers had reached our house,” Iman recalled. “We went on the roofs and tried to show we were civilians with white flags. Everyone was carrying a white flag. We told them we are civilians. We don’t have any weapons. The soldiers started to destroy the houses even if the people were in them.” Describing the death of Rawhiya, Iman says they were ordered by Israeli soldiers to move to the centre of the town. As they did, Israeli troops opened fire. Rawhiya was at the front of the group, says Iman.

Marwan Abu Raeda, 40, a paramedic working for the Nasser hospital in Khan Younis, said: “At 8am we received a phone call from Khuza’a. They told us about the injured woman. I went immediately. I was 60 or 70 metres away from the injured woman when the Israeli forces started to shoot at me.” As he drove into another street, he came under fire again. Twelve hours later, when Rawhiya was finally reached, she was dead.

Iman said she ended up in an area of rubble where a large group of people had sought cover in a deep hole among the debris of demolished houses. It is then, she says, that bulldozers began to push the rubble from each side. “They wanted to bury us alive,” she said.