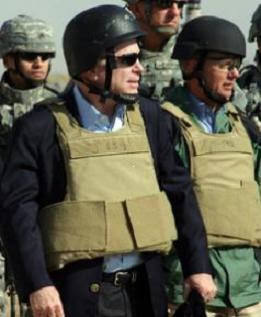 John McCain at Forward Operating Base Warrior in Kirkuk, Iraq. Photo by Staff Sgt. Margaret Nelson
‘McCain can see no alternative to military victory, no matter what the cost’
By Steve Weissman / August 12, 2008

During the hottest days of the Cold War, Gen. Thomas Power headed the Strategic Air Command, whose nuclear-armed B-52s were meant to deter the Soviet Union. General Power, like many of the Air Force brass at the time, believed that nuclear war with the Soviets was inevitable. He thought the United States would do better to fight that war sooner rather than later and believed we could emerge victorious. “At the end of the war,” he argued in 1960, “if there are two Americans and one Russian, we win!”

Listening to John McCain talk about Iraq and Iran, I keep thinking of Power. Counter-insurgency and nuclear obliteration are poles apart, I know. But McCain’s insistence on “winning in Iraq,” remaining there “until Iraq is secure,” and “bomb-bomb-bombing Iran” reveal the same mindset that made General Power so dangerous. Caught up in his fear that a military failure would encourage America’s enemies, McCain can see no alternative to military victory, no matter what the cost. This might be a laudable spirit to drum into raw military recruits, but could prove extremely self-destructive in a commander in chief.

The question, if only Obama would ask, is simple: What in McCain’s mind would a military victory in Iraq look like? One of the key instigators of the US invasion, McCain has suggested different answers over the years.

As president of the New Citizenship Project, founded in 1994, he helped create and raise funding for the Project for the New American Century (PNAC), which neo-conservatives such as William Kristol, Richard Perle and Paul Wolfowitz used to push their plans for a pre-emptive war against Iraq. McCain also gave early support to Ahmed Chalabi, the Iraqi exile who widely fabricated and skillfully publicized deliberate disinformation to scare Americans into believing that Saddam Hussein had links to al-Qaeda and active weapons of mass destruction. McCain has recently tried to play down his relationship with the still-active Chalabi, especially since the CIA and others accused the Iraqi of secretly working with Iran.

A top Republican on the Senate Armed Forces Committee, McCain began publicly urging the United States to overthrow Saddam Hussein as early as 1997, calling on the Clinton administration to set up an Iraqi government in exile. The following year, he joined with Senator Joe Lieberman and others to introduce the “Iraq Liberation Act of 1998,” committing Washington to fund Chalabi and other anti-Saddam opposition groups.

In the run-up to the invasion in 2002 and early 2003, McCain continued to join with his neo-conservative allies in parroting Chalabi’s scare stories about terrorist links and WMD and in publicly promoting Chalabi as “a patriot with the interest of Iraq at heart.” McCain also competed with Dick Cheney and Donald Rumsfeld in telling Americans how easy the war would be, how few troops we would need, how the Iraqis would welcome us as their liberators, and how the example of regime change in Iraq would lead to a new wave of democracy throughout the region.

McCain was wrong on every count, and the image of victory he projected – our friend Chalabi leading a peaceful, democratic Iraq that would welcome American military bases for as long as 100 years – now seems, at best, quaint. In fact, the single Iraqi issue on which McCain can conceivably claim to have made a sound judgment was his support for the so-called “surge,” last year’s escalation of American forces that many observers credit with a relative decrease in violence. Other observers point to two factors that McCain doesn’t want to discuss – the ethnic cleansing of Baghdad’s neighborhoods, which forcibly separated feuding Shi’a and Sunnis, and the Pentagon’s effort to win over Sunni tribesmen and former insurgents, often by putting them on the US payroll.

According to Congressional testimony from Gen. David Petraeus, the rapprochement with the Sunnis actually began well before the new troops arrived. More importantly, it will likely prove short-lived if the Shi’a-led government in Baghdad does not move quickly to give the Sunnis a fair share of the economic and political future of a united Iraq. As McCain and others originally proposed it, the surge was supposed to create time and space for these and other political steps, but the Iraqis see no reason to seek political solutions as long as they believe that American troops will remain in country to protect them from their domestic rivals.

McCain does not dispute this. He ignores it, just as he refuses to see that the continued presence of American troops in Iraq has helped to recruit far more anti-American jihadists in Iraq and out than we can ever hope to kill, a point CIA and other analysts have repeatedly made. This is the political side of our current military disaster, and McCain just does not get it. For all his much-vaunted experience, he simply cannot see that a foreign military presence will generally create a hugely negative response, as it has in post-colonial lands from Iraq to Afghanistan – and just as it would in his native Arizona.