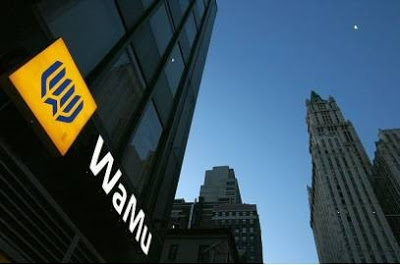 Following a scramble by government regulators to find a buyer, JPMorgan Chase & Co. says it will acquire the operations of Washington Mutual after the nation’s largest savings and loan was seized by the FDIC on Thursday. Photo: Mark Lennihan, AP
WaMu Becomes Biggest US Bank to Fail: JPMorgan Buys Washington Mutual’s Banking Assets for $1.9 Billion
By Madlen Read / September 26, 2008

NEW YORK — As the debate over a $700 billion bank bailout rages on in Washington, one of the nation’s largest banks – Washington Mutual Inc. – has collapsed under the weight of its enormous bad bets on the mortgage market.

The Federal Deposit Insurance Corp. seized WaMu on Thursday, and then sold the thrift’s banking assets to JPMorgan Chase & Co. for $1.9 billion.

Seattle-based WaMu, which was founded in 1889, is the largest bank to fail by far in the country’s history. Its $307 billion in assets eclipse the $40 billion of Continental Illinois National Bank, which failed in 1984, and the $32 billion of IndyMac, which the government seized in July. 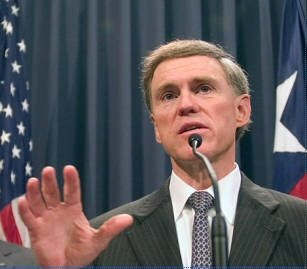 Ousted as Washington Mutual’s CEO earlier this month, Kerry Killinger will receive as much as $22 million on his way out the door. Photo: Thomas Terry, AP

One positive is that the sale of WaMu’s assets to JPMorgan Chase prevents the thrift’s collapse from depleting the FDIC’s insurance fund. But that detail is likely to give only marginal solace to Americans facing tighter lending and watching their stock portfolios plunge in the wake of the nation’s most momentous financial crisis since the Great Depression.

Because of WaMu’s souring mortgages and other risky debt, JPMorgan plans to write down WaMu’s loan portfolio by about $31 billion – a figure that could change if the government goes through with its bailout plan and JPMorgan decides to take advantage of it.

WaMu is JPMorgan Chase’s second acquisition this year of a major financial institution hobbled by losing bets on mortgages. In March, JPMorgan bought the investment bank Bear Stearns Cos. for about $1.4 billion, plus another $900 million in stock ahead of the deal to secure it.

JPMorgan Chase is now the second-largest bank in the United States after Bank of America Corp., which recently bought Merrill Lynch in a flurry of events that included Lehman Brothers Holdings Inc. going bankrupt and American International Group Inc., the world’s largest insurer, getting taken over by the government.

The downfall of WaMu has been widely anticipated for some time because of the company’s heavy mortgage-related losses. As investors grew nervous about the bank’s health, its stock price plummeted 95 percent from a 52-week high of $36.47 to its close of $1.69 Thursday. On Wednesday, it suffered a ratings downgrade by Standard & Poor’s that put it in danger of collapse.

“For all depositors and other customers of Washington Mutual Bank, this is simply a combination of two banks,” Bair said in a statement. “For bank customers, it will be a seamless transition. There will be no interruption in services and bank customers should expect business as usual come Friday morning.”

The seizure by the government means shareholders’ equity in WaMu was wiped out. The deal leaves private equity investors including the firm TPG Capital, which led a $7 billion cash infusion in the bank this spring, on the sidelines empty handed.

WaMu ran into trouble after it got caught up in the once-booming subprime mortgage business. Troubles then spread to other parts of WaMu’s home loan portfolio, namely its “option” adjustable-rate mortgage loans. Option ARM loans offer very low introductory payments and let borrowers defer some interest payments until later years. The bank stopped originating those loans in June.

Problems in WaMu’s home loan business began to surface in 2006, when the bank reported that the division lost $48 million, compared with net income of about $1 billion in 2005.

At the start of 2007, following the release of the company’s annual financial report, then-CEO Kerry Killinger said the bank had prepared for a slowdown in its housing business by sharply reducing its subprime mortgage lending and servicing of loans. Alan H. Fishman, the former president and chief operating officer of Sovereign Bank and president and CEO of Independence Community Bank, replaced Killinger earlier this month.

As more borrowers became delinquent on their mortgages, WaMu worked to help troubled customers refinance their loans as a way to avoid default and foreclosure, committing $2 billion to the effort last April. But that proved to be too little, too late.

At the same time, fears of growing credit problems kept investors from purchasing debt backed by those loans, drying up a source of cash flow for banks that made subprime loans.

In December, WaMu said it would shutter its subprime lending business and reduce expenses with layoffs and a dividend cut.

The bank in July reported a $3 billion second-quarter loss – the biggest in its history – as it boosted its reserves to more than $8 billion to cover losses on bad loans. Over the last three quarters, it added $10.9 billion to its loan-loss provisions.

JPMorgan Chase said it was not acquiring any senior unsecured debt, subordinated debt, and preferred stock of WaMu’s banks, or any assets or liabilities of the holding company, Washington Mutual Inc. JPMorgan also said it will not take on the lawsuits facing the holding company.

JPMorgan Chase said the acquisition will give it 5,400 branches in 23 states, and that it plans to close less than 10 percent of the two companies’ branches.

“This is a definite win for JPMorgan,” said Sebastian Hindman, an analyst at SNL Financial, who said JPMorgan should be able to shoulder the $31 billion writedown to WaMu’s portfolio.