And it’s reasonable to speculate that this is happening across the country. It says everything about national priorities that we put billions into bailing out financial institutions, some of which are demonstrably corrupt, but those individuals who need funding for retraining in difficult economic times have the privilege of waiting until July to be funded. 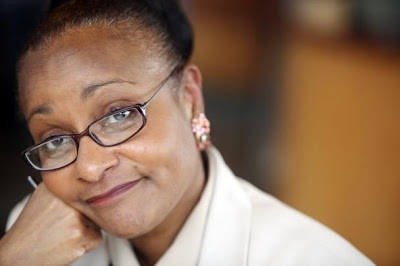 Shawn Oglesby, who was laid off recently, has had to put her study plans on hold for now. Photo: Erika Schultz / The Seattle Times.
State-funded college retraining programs run out of money
By Nick Perry / April 5, 2009

At the worst possible time, community colleges across the state are turning away unemployed workers because there’s no money left to retrain them.

With Washington’s unemployment rate hitting 8.4 percent in February, up from 4.7 percent a year earlier, demand for the popular, state-funded worker-retraining program has skyrocketed to the point where it’s gone bust — at least until the next fiscal year, which begins in July.

The program paid up to two years’ worth of tuition, transportation and books for people who had lost jobs and were looking to upgrade their skills or find another line of work.

Take Shawn Oglesby. She spent most of the past decade selling mortgages and other financial products, but was laid off in January because of the economic crisis.

After striking out trying to find another job, she’d hoped to move in a new direction by studying for an associate degree in business, with a certificate in insurance. In normal times, she would have been a perfect candidate for worker-retraining money.

But when she walked into Bellevue Community College (BCC) last week, staff told her there was no money left. If she wanted to study, they told her, she’d have to pay full freight — something she can’t afford on her unemployment checks.

Oglesby said she’s put her study plans on hold for now and is continuing to apply for all sorts of jobs.

BCC, the state’s largest community college, ran out of worker-retraining money three weeks ago, said Darlene Molsen, the college’s director of work-force education. The college is telling students to try again in July.

“It’s a very sad time. A very sad time,” Molsen said. “People are stressed. They are concerned about getting access to unemployment benefits. Their money’s gone, there’s no work, and they need to upgrade their skills for a chance of work.”

It’s the same message at Shoreline Community College, which ran out of worker-retraining money in January. The school managed to patch together federal grants and other funds to help students for a while, but now it has nothing left.

“We have no more resources,” said Berta Lloyd, the college’s dean of work-force education. “All the Puget Sound colleges are out of money. There has just been a crush of students; it’s unbelievable.”

Jim Crabbe, the director of work-force education at the State Board for Community and Technical Colleges, said that last year, the state allocated about $29 million to fund 6,200 workers who needed retraining. The money turned out to be not nearly enough.

He said unemployed people should still apply to community colleges anyway, to see if they qualify for other types of federal or state assistance. But the colleges say that whatever program you want to name, it’s likely tapped out.

Molsen said BCC couldn’t have anticipated what has happened. In January through March last year, BCC had 134 people come to its weekly worker-retraining orientation sessions. In the same period this year, 572 people showed up.

Worker-retraining money is supposed to help the unemployed gain new skills — and jobs — in short order. Students wanting to study for four-year bachelor’s degrees don’t qualify. But those wanting to quickly improve their computer skills or get into high-demand fields such as health care often can take advantage. Over the years, the program has helped thousands.

One of those is Sean Mattingly of Renton. He was a captain and mate on a popular summer ferry route out of Seattle. But after the terrorist attacks of 2001, he said, there was a notable drop in business. The summer season got shorter, and he found it more and more difficult to find supplemental boating work the rest of the year. With a young family to provide for, he realized it was time to change careers. 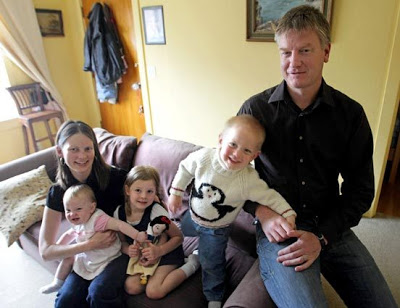 Sean Mattingly; wife Pam; children Kasey, 4, Riley, 2, and Sophie, 1, in their Renton home. Mattingly took advantage of a retraining program and is about to graduate as a nurse. Photo: Jim Bates/The Seattle Times.

So, in 2006, he took advantage of the worker-retraining program and began studying at Seattle Central Community College to become a registered nurse. He will finish the program by the end of the spring quarter.

Seattle Central is one college that is not turning away unemployed students. Mary Lockman, Seattle Central’s worker-retraining adviser, said although the retraining money is gone, the college has been doing a “huge patch job” to help needy students by raiding other pots of money, originally intended for such things as administrative support.

“We are grubbing the budget down to the last penny,” Lockman said. “Somebody turned up $1,000 the other day. That can help with one student’s tuition.”

But the college can only afford to help with tuition, not books or transportation. That forced one out-of-work student, Kathleen Bryant, to start walking the nearly three miles home each day because she can’t afford the bus fare.

The good news, Bryant says, is that she gets to study. And she’s lost 12 pounds to boot.

This entry was posted in RagBlog and tagged Economic Crisis, Education, Unemployment. Bookmark the permalink.