We Are a Nation at War with Ourselves 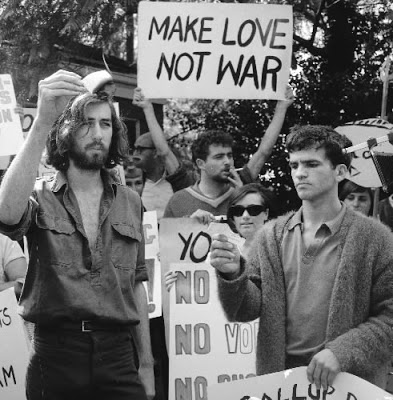 I recently heard from an anti-war student I met while I was speaking at a college in northern Vermont. The e-mail included the following query:

“I told you about how I wanted to build a career around social activism and making a difference. You told me that one of the most important things was to make myself reputable and give people a reason to listen to you. I think this is some of the best advice I’ve received. My issue however is that you mentioned joining the military as a way to do this and mentioned how that is how you fell into it. … We talked extensively about all of our criticisms of the military currently and our foreign policy. … What I don’t understand is, how can you [advise] someone who wants to make a difference with the flawed system, to join that flawed system?”

The question is a valid one. Throughout my travels in the United States, where I interact with people from progressive anti-war groups, I am often confronted with the seeming contradiction of my position. I rail against the war in Iraq (and the potential of war with Iran) and yet embrace, at times enthusiastically, the notion of military service. It gets even more difficult to absorb, at least on the surface, when I simultaneously advocate counter-recruitment as well as support for those who seek to join the armed services.

The notion that the military and citizens of conscience should be at odds is a critical problem for our nation. That confrontation only exacerbates the problems of the soldier and the citizen, and must be properly understood if it is to be defeated. Let us start by constructing a framework in which my positions can be better assessed.

First and foremost, I do not view military service as an obligation of citizenship. I do view military service as an act of good citizenship, but it can under no circumstance be used as a litmus test for patriotism. There are many ways in which one can serve his or her nation; the military is but one. I am a big believer in the all-volunteer military. For one thing, the professional fighting force is far more effective and efficient than any conscript force could ever be.

There are those who argue that a draft would level the playing field, spreading the burdens and responsibilities associated with a standing military force more evenly among the population. Those citizens whose lives would be impacted through war (namely those of draft age and their immediate relatives) would presumably be less inclined to support war.

Conversely, the argument goes, with an all-volunteer professional force, the burden of sacrifice is limited to that segment of society which is engaged in the fighting, real or potential. Two points emerge: First, the majority of society not immediately impacted by the sacrifices of conflict will remain distant from the reality of war. Second, even when the costs of conflict become discernable to the withdrawn population, the fact that the sacrifice is being absorbed by those who willingly volunteered somehow lessens any moral outcry.

I will submit that these are valid observations, and indeed have been borne out in America’s response to the Iraq war tragedy. However, simply because something exists doesn’t make it right. The collective response to the Iraq war on the part of the American people is not a result of there not being a draft, but rather poor citizenship. An engaged citizenry would not only find sufficient qualified volunteers to fill the ranks of our military, but would also personally identify with all those who served so that the loss of one was felt by all. The fact that many Americans today view the all-volunteer force not so much as an extension of themselves, but more along the lines of a “legion” of professionals removed from society, illustrates the yawning gap that exists between we the people and those we ask to defend us.

Narrowing this gap is not something that can be accomplished simply through legislation. Reinstating the draft is illusory in this regard. There is a more fundamental obstacle to the reunion of our society and those who take an oath in the military to uphold and defend the Constitution. Void of this bond, the inherent differences of civilian and military life will serve to drive a wedge between the two, regardless of whether the military force is drafted or volunteer.

Lacking a common understanding of the foundational principles upon which the nation was built, a citizenry will grow to view military service as an imposition, as opposed to an obligation. Simply put, one cannot willingly defend that which one does not know and understand. The fundamental ignorance that exists in America today about the Constitution creates the conditions which foster the divide between citizen and soldier that permeates society today. America must take ownership of its military, not simply by footing the bill, but by assuming a moral responsibility for every aspect of military service. The vehicle for doing this has been well established through the Constitution: the legislative branch of government, the Congress, which serves to represent the will of the people.

Congress, especially the House of Representatives, was never conceived of as separate and distinct from the people, but rather as one with the people, directly derived from their collective will via the electoral process. Unfortunately today, few Americans identify with Congress. An “us versus them” mentality pervades. This mentality creates the crack in the moral and social contract which exists regarding a citizenry and its military. Congress is responsible for maintaining the military. Congress is the branch of government mandated with the responsibility for declaring war. When the bond is strained between the people and Congress, the bond between citizen and soldier is broken. Congress, left to its own devices, will begin to view the military not as an extension of its constituents, but rather as a commodity to be traded and used in a highly politicized fashion.

This is the reality we find ourselves in today (and indeed which has existed for some time). The 2006 midterm elections highlight this reality, where a strong anti-war sentiment upon the part of the voters resulted in a Democratic majority in both the House of Representatives and the Senate. Having assumed the mantle of legislative power, however, those who were elected on the coattails of anti-war sentiment were able to shun their anti-war constituents. They did so by taking full advantage of the reality that the anti-war movement was in fact not a movement at all, but rather a concept pushed forward by a disparate mass without much political viability.

Where anti-war sentiment did in fact cross over from the ranks of the progressive left and into the mainstream of American society, it was quickly quashed through the dishonest logic that if one truly supported the troops (as most red-blooded Americans swear they do), then one must by extension support the mission. This flawed connectivity empowered Congress to sidestep the issue of withdrawing American forces from Iraq, and enabled it to continue rubber-stamping funding for a war which long ago lost any connection, perceived or otherwise, to the general security of the American people.

Read all of it here. / TruthDig / Common Dreams

This entry was posted in RagBlog and tagged Dissent, Military, U.S. Government. Bookmark the permalink.