We Are Iraqis and No One Cares About Our Safety 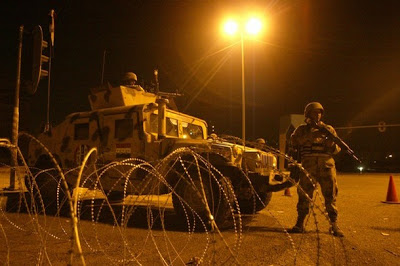 It was only my second time out of Iraq traveling to a foreign country. It was night and from above Turkey we could see lights, like millions of colorful diamonds scattered around. When we were flying over Iraq, below we could see only a dust cloud and darkness.

Our flight to Turkey was six hours late and arrived at 3.30 a.m. I was very worried because the word “late” in Iraq means you expect to be shot. Not by terrorists, but by the Iraqi army or the Americans, unless you have a good excuse or are very lucky.

When we arrived to Istanbul, my wariness vanished as I found an entirely different world there. The airport was so fancy, the Turkish people were so nice; the streets were all surrounded by red and blue and different colors of flowers.

And although it was late we could see cars in the streets and people walking nearby, and when entering the neighborhood where we were staying, I thought it was only sunset as I saw many, many people walking around and sitting in restaurants.

Returning to Iraq, our flight was also late, by four hours. I was so worried since our arrival to Baghdad was at 10.30 p.m. and that was not safe.

The streets in Baghdad after 9 p.m. are very dangerous and full of army, police and American checkpoints. Sometimes they can’t understand why you are out late and shoot, and sometimes they understand.

It took more than an hour to land, to be searched, to have our passports stamped and to wait for our bags. I wonder why they didn’t think of the security situation for the passengers who arrived at such a late hour?

Maybe the airplane is more important than the passengers. Well, we are Iraqis and no one cares about our safety. They care more about their interests and our oil. I totally understand that, and have got used to living with this reality.

At 11.20 p.m. we finished everything and we headed to look for any means of transportation that could take us to the square where my husband and my brother were waiting.

We drove through the darkness and passed through several checkpoints. The first one was a warm greeting from two American tanks pointing their barrels at us. The others were the Iraqi army, each time asking us, ‘Where are you coming from?’ and ‘Where are you going to?’ and opening the trunk to search our bags.

The streets were empty, shops were closed. There was only us, the army and the blast walls. As we were driving in this dead city and empty neighborhood we saw a man who was only wearing shorts sitting half-naked in the middle of the road, at midnight.

Of course he was not like all the tourists that I saw that morning wearing shorts in Turkey. He was planting a bomb. And when he saw us, he ran away.

Anwar J. Ali is an Iraqi journalist who works for The New York Times in Baghdad. This is the second of two articles on her recent trip to Turkey. The first was published on Baghdad Bureau on Thursday.