‘We Filled a Lot of Space Together’ – G.W. Bush 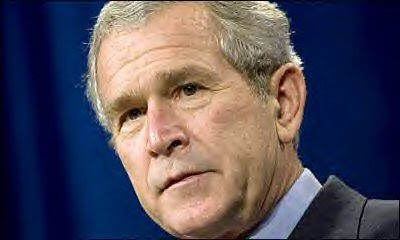 When I decided to post this, I thought I would label it with the term ‘humor,’ but realised I just couldn’t bring myself to do it. There’s nothing even remotely humourous about these quotations from President Junior. They’re absolutely disheartening. Or, as E.L. Doctorow has said,

“He is the subject of jokes and he jokes himself about his clumsiness with words, but his mispronunciations and malapropisms suggest a mind of half-learned language that is eerily compatible with his indifference to truth, his disdain for knowledge as a foundation of a democratic society.” (from the Nation)

“There’s no question about it. Wall Street got drunk — that’s one of the reasons I asked you to turn off the TV cameras — it got drunk and now it’s got a hangover. The question is how long will it sober up and not try to do all these fancy financial instruments.” –George W. Bush, speaking at a private fundraiser, Houston, Texas, July 18, 2008

“I think it was in the Rose Garden where I issued this brilliant statement: If I had a magic wand — but the president doesn’t have a magic wand. You just can’t say, ‘low gas.'” –George W. Bush, Washington D.C., July 15, 2008

“And they have no disregard for human life.” –George W. Bush, on the brutality of Afghan fighters, Washington, D.C., July 15, 2008

“Throughout our history, the words of the Declaration have inspired immigrants from around the world to set sail to our shores. These immigrants have helped transform 13 small colonies into a great and growing nation of more than 300 people.” –George W. Bush, Charlottesville, Va., July 4, 2008

“Should the Iranian regime-do they have the sovereign right to have civilian nuclear power? So, like, if I were you, that’s what I’d ask me. And the answer is, yes, they do.” –George W. Bush, talking to reporters in Washington, D.C., July 2, 2008

“I remember meeting a mother of a child who was abducted by the North Koreans right here in the Oval Office.” –George W. Bush, Washington, D.C., June 26, 2008

“I want to tell you how proud I am to be the President of a nation that — in which there’s a lot of Philippine-Americans. They love America and they love their heritage. And I reminded the President that I am reminded of the great talent of the — of our Philippine-Americans when I eat dinner at the White House.” –George W. Bush, referring to White House chef Cristeta Comerford while meeting with Filipino President Gloria Macapagal Arroyo, Washington, D.C., June 24, 2008

“And I, unfortunately, have been to too many disasters as president.” –George W. Bush, discussing flooding in the Midwest, Washington, D.C., June 17, 2008

“There is some who say that perhaps freedom is not universal. Maybe it’s only Western people that can self-govern. Maybe it’s only, you know, white-guy Methodists who are capable of self-government. I reject that notion.” –George W. Bush, London, June 16, 2008

“Your eminence, you’re looking good.” –George W. Bush to Pope Benedict XVI, using the title for Catholic cardinals, rather than addressing him as “your holiness,” Rome, June 13, 2008

“We’ve got a lot of relations with countries in our neighborhood.” –George W. Bush, Kranj, Slovenia, June 10, 2008

“One of the things important about history is to remember the true history.” –George W. Bush, Washington, D.C., June 6, 2008

“There’s no question this is a major human disaster that requires a strong response from the Chinese government, which is what they’re providing, but it also responds a compassionate response from nations to whom — that have got the blessings, good blessings of life, and that’s us.” –George W. Bush, on relief efforts after a Chinese earthquake, Washington, D.C., June 6, 2008

“Let’s make sure that there is certainty during uncertain times in our economy.” — George W. Bush, Washington, D.C., June 2, 2008

Read the rest of them here, if you can stand it. / About.com