We Little Understand the Great Tragedy of Black America 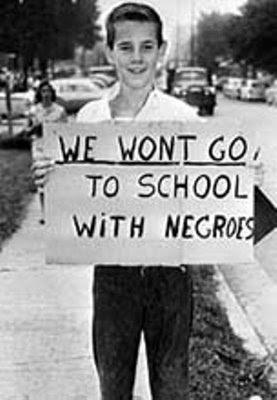 I read three books at once while waiting for the Brush Hog to be fixed. No one sits in the Brush Hog repair shop and reads books, they usually read the grease covered copies of Penthouse and Playboy, or they just chew tobacco and jaw with the mechanic. The mechanic who commented on my Obama bumper sticker, “Ain’t he the antichrist?” The Brush Hog may be in trouble. Another beer-bellied fellow who looked like his tummy might have him so out of balance that he could topple over at any moment added, “Don’t pick on him Mape, we need a few N….r lovers around here.” I would have just packed it in and left but the Brush Hog was all in pieces. I also knew to keep mum. Again I was a coward when faced with bigots.

These are paraphrases from God’s Politics by Jim Wallis. And as a note on the author, he started out as an Evangelical and was told that Christianity had nothing to do with racism. That didn’t sit well and he left the movement. Evangelicals however have been forced by their own recruitment of minorities to take a different tact in more recent times. Evangelical churches are growing in the third world by leaps and bounds. This has a marked effect on the racist dogma of these churches. Evangelicals are more predictable than the mainline churches who seem out of touch and out of gas on the subject.

“We have gone from a war on poverty to a war on the poor.” Bishop John B. Chane

I heard that song many times and it never really dawned on me until late what it was telling me, us. Now I see it again in “God’s Politics” by Jim Wallis and it hits home like a hammer.

The United States of America was established as a white society, founded upon the genocide of another race and the enslavement of yet another.

That is a statement of fact and has affected everything that came after.

And here I will paraphrase Howard Dean in what was his most significant speech made in (of all places) South Carolina on December 7, 2003.

For four decades, the primary political project of the Republican Party has been to transform itself into the White Man’s party. Not only in the Deep South, but also nationally, the GOP seeks to secure a majority popular base for corporate government through coded appeals to white racism. The success of this GOP project has been the central fact of American politics for two generations – reaching its fullest expression in the Bush presidency.

In 1968 Richard Nixon won. He did so in a most shameful way – by dividing Americans against each other, stirring racial prejudices and bringing out the worst in people. Nixon invented the Southern Strategy. (That strategy so carefully honed by Karl Rove.) The GOP is using it still. Reagan perfected it with phrases like “racial quotas” and “welfare queens” to put the blame on minorities for all America’s problems.

The GOP would never win an election if the came out and said their agenda was to sell America piece by piece to their campaign contributors and to concentrate power in the hands of a few. So to distract the voters from their agenda they run elections based on race which divides.

Lyndon Johnson said this, “Negro poverty is not white poverty. Many causes are the same. But there are differences, deep and significant differences that came from painful roots into the community and into the family, and the nature of the individual. These differences are not racial. They are the consequence of ancient brutality, injustices and today’s prejudice. We are all in this together.

The white majority little understand, or even care about, the great tragedy of how the black anger our society generates in the African American youth that has become such a destructive and dangerous obstacle to success.

This entry was posted in RagBlog and tagged American Society, Racism. Bookmark the permalink.