We Need You Now More Than Ever

Seam Marauder Palin – that’d be my name if I was Sarah’s kid. Better check out the link in this article to find out who you would’ve been if born to that woman. Maybe you’ll think long and hard about what Anne Lamott says here if you do. Good luck!! 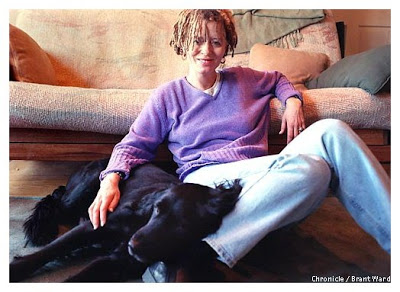 Anne Lamott with friend
A call to arms
By Anne Lamott / September 16, 2008

How to handle the fury brought on by this election? Register voters, hit the streets, pray. Stop talking about her. Talk about Obama.

I had to leave church Sunday morning when it turned out that the sermon was not about bearing up under desperate circumstances, when you feel like you’re going crazy because something is being perpetrated upon you and your country that is so obscene that it simply cannot be happening.

I sat outside a 7-Eleven and had a sacramental Dove chocolate bar. Jeez: Here we are again. A man and a woman whose values we loathe and despise — lying, rageful and incompetent, so dangerous to children and old people, to innocent people in every part of the world — are being worshiped, exalted by the media, in a position to take a swing at all that is loveliest about this earth and what’s left of our precious freedoms.

When I got home from church, I drank a bunch of water to metabolize the Dove bar and called my Jesuit friend, who I know hates these people, too. I asked, “Don’t you think God finds these smug egomaniacs morally repellent? Recoils from their smugness as from hot flame?”

And he said, “Absolutely. They are everything He or She hates in a Christian.”

I have been in a better mood ever since, and have decided not to even say this woman’s name anymore, because she fills me with such existential doubt, such a sense of impending doom and disbelief, that only the Germans could possibly have words for it. Nor am I going to say the word “lipstick” again until after the election, as it would only be used against me. Or “polar bear,” because that one image makes me sadder than even horrible old I can stand.

I hate to criticize. And I love to kill wolves as much as the next person does. But this woman takes such pride in her ignorance, doesn’t have a doubt in the world about her messianic calling, that it makes anyone of decency feel nauseated — spiritually, emotionally and physically ill.

We felt this grief and nausea during the run-up to the war in Iraq. We felt it after the 2004 election. And now we feel it again.

But since there are still six weeks until the election, and since the stakes are as high as the sky, which should definitely not be forced to endure four more years of the same, we have got to get a grip. There are millions of people to register to vote, millions of dollars to be raised. We really cannot go around feeling flat and defeated, with the need to metabolize the rotten meat that this one particular candidate and the media have forced upon us.

One of the tiny metabolic suggestions I have to offer — if, like me, you choose not to have her name on your lips, like an oozy cold sore (I say that with love) — is to check out a Web site called the Sarah Palin Baby Name Generator. There you can find out what she and her husband would have named you if you had been their baby. My name, Anne, for instance, would be Krinkle Bearcat. John, her running mate, would be named Stick Freedom. George would be Crunk Petrol. And so on.

First of all, go find out what your own name would be. Then for one day refuse to use the name of these people who are so damaging to earth and to our very souls — so, “I don’t have to understand anything, it’s all fuzzy math. Trust me. I’m the decider.” From now on, when working for Obama, talk about Obama, talk about his policies, the issues, the economy, the war in Iraq, poverty, the last eight years, Joe Biden. You don’t have to mention Crunk Petrol, or his sidekick, Shaver Razorback.

And you sure as hell don’t have to mention Claw Washout — she is absolutely, hands-down the most ludicrous person ever to be nominated. She’s a “South Park” character. There was a mix-up. Mistakes were made.

Everything you need to know about how to bear up during these two months is already inside you. Go within: Work on your own emotional acre. Stand still, and hurt, and feel crazy. Then drink a lot of water, pray, meditate, rest. Rest is a spiritual act. Now, I am a reform Christian, so it is permissible for me to secretly believe that God hates this woman, too. I heard God slam down a couple of shooters while she was talking the other night.

Figure out one thing you can do every single day to be a part of the solution, concentrating on swing states. Money, walking precincts, registering voters, whatever. This is the only way miracles ever happen — left foot, right foot, left foot, breathe. Right foot, left foot, right foot, breathe. The great novelist E.L. Doctorow once said that writing a novel is like driving at night with the headlights on: You can only see a little ways in front of you, but you can make the whole journey this way. It is the truest of all things; the only way to write a book, raise a child, save the world.

As my anonymous pal Krinkle Bearcat once wrote: Laughter is carbonated holiness. It is chemo. So do whatever it takes to keep your sense of humor. Rent Christopher Guest movies, read books by Roz Chast and Maira Kalman. Picture Stick Freedom in his Batman underpants, having one of his episodes of rage alone in one of his seven bedrooms. Or having one of his bathroomy little conversations with Froth Moonshine. (Bless their hearts.) Try to remember that even Karl Rove has accused him of being a lying suck.

Reread everything Molly Ivins and Jim Hightower ever wrote. Write down that great line of Molly’s, that “freedom fighters don’t always win, but they’re always right.” Tape it next to your phone.

Call the loneliest person you know. Go flirt with the oldest person at the bookstore.

Fill up a box with really cool clothes that you haven’t worn in a year, and take it to a thrift shop. Take gray water outside and water whatever is growing on your deck. This is not a bad metaphor to live by. I think it is why we are here. Drink more fluids. And take very gentle care of yourself and the people you most love: We need you now more than ever.

1 Response to We Need You Now More Than Ever