We, the People, Have Been Ambushed 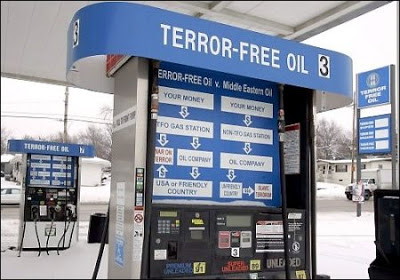 When Will the People Fight Back? Oil and Racism
By Reza Fiyouzat / June 15, 2008

It is customary to run into brazenly racist commentary coming out of the U.S. liberals and right-wingers alike, especially when it comes to the question of oil. Besides the occasional surreal headlines about congressional members suing OPEC, it is normal to read headlines urging OPEC member countries to increase production. It is as if we were at a restaurant, trying to get more service. ‘Hey waiter! More drinks over here!’

The more liberal ones, of course, take it to another level. In the context of ‘oil shortages’, when the right wingers assert that more internal exploration/extraction is needed, the inevitable liberal knee-jerk reaction is, ‘Of course not! Leave our wildlife alone!’

As it relates to the issue of oil, there is proliferation of a language and mentality that is racist to the core. The two variations, militarism and capitalistically defined ‘environmentalism’, are espoused by the right and the liberal wings respectively. The line of thinking starts out with something like this: Those damned Ay-rabs (say, Saudis) are holding us hostage (or, insert any other OPEC member the State Dept and media lackeys are bullying that day); and concludes with: So, we must reduce our dependence on foreign oil (with the adjective ‘foreign’ intoning a four-letter word). By all means, do!

Is There a Shortage?

A component of the liberal racist argument is the quantitative comparisons of proven worldwide oil reserves. In an inverse pissing game, they paint a picture of an abundance of oil those, say, Saudis are ‘sitting on’ (260 billion barrels), compared to the measly sum available underneath the U.S. (a mere 21 billion; weep, weep!). This ’21 billion barrels’ is the figure usually given for the amount of oil available in the U.S.; Wikipedia gives this number, as do numerous mainstream and even some leftist journalists and writers. However, this is an erroneous figure.

According to a report prepared by the Dept of Interior, for the U.S. Congress, dated February 2006, the amount of actually recoverable oil available to the U.S. exploiters is more than five times the ‘official’ 21 billion barrels. “The total endowment of technically recoverable oil and gas on the [U.S. Outer Continental Shelf] is comprised of known resources—i.e., cumulative production, and estimates of remaining proved and unproved reserves and reserves appreciation—plus estimates of undiscovered resources. The estimate of the total hydrocarbon endowment … is 115.4 billion barrels of oil (Bbo) and 633.6 trillion cubic feet of gas,” (from the Executive Summary, p. vi-vii, emphasis added).

For comparison, the current proven reserves the Iraqis are ‘sitting on’ is likewise 115 Bbo.

Additionally, according to a 2004 report prepared by the Dept of Energy’s Office of Naval Petroleum and Oil Shale Reserves, “The vast extent of U.S. oil shale resources, amounting to more than 2 trillion barrels, has been known for a century. […] The huge resource base has stimulated several prior commercial attempts to produce oil from oil shale, but these attempts have failed primarily because of the historically modest cost of petroleum with which it competed. With the expected future decline in petroleum production historic market forces are poised to change and this change will improve the economic viability of oil shale,” (emphasis added). The market forces clearly are a-changing, so shale oil is no longer such an uneconomic energy source after all.

There are therefore vast amounts of available oil that consumers in the U.S. can start tapping into, thereby cutting their urge to wage wars of possession for energy resources of others. As you see, you do have your own oil, and lots of it, too. Just dig it up!

So, why is all this oil kept underground? As relates to oil, what are the strategic interests of the U.S. ruling classes? The view from the Third World is not complicated. The good singer once sang: God blessed the child who’s got his own. Well, the U.S. ruling classes sure have got their own, but what they really want is to keep their own. And the reason for that is: If the resources of other societies in the periphery are depleted first, the center can continue to hold its central place, strategically. It is really very simple.

1) Non-OPEC countries produce 60% of the oil available on the world market. Canada, for example, is the biggest exporter of oil to the U.S. Yet, do you ever read any headlines demanding the Canadians increase their oil production, or threatening to sue Canada for withholding higher levels of oil production and driving up the prices? Not very likely!

2) The real demand for oil has not increased at the same rate (or, in proportional percentages) as the increases in oil prices. Even given the increased demand (due to ‘insatiable appetites’ of the economies of India and China), surely the global gross output of products cannot have jumped by so much as to explain the rate of the increases in oil prices. The world aggregate production is the key, not merely the Chinese and Indian GNP growth. The production sites for specific commodities may have changed locations, hence the increase in demand for oil in some locations, but the world capitalist system as a whole has not increased its production levels by an amount that can explain the rise in energy costs.

3) Most oil companies secure their inventories through long-term contracts, such as five, ten- to thirty-year contracts, and at set prices. This means that the handful of monopolies that control about 70-80% or more of the distribution networks (the key element in control of oil prices) are getting their supplies mostly at prices set ten, twenty or even thirty years ago.

From the above, you can easily guess what shall be concluded: the oil price rises are a classic, right out of the playbook, gigantic scam.

Smile for the cameras, you’ve been had!

Read all of this remarkable analysis here. / CounterPunch

This entry was posted in RagBlog and tagged Energy, Global Economy, Racism. Bookmark the permalink.