We Won’t Pay for Your Crisis !! 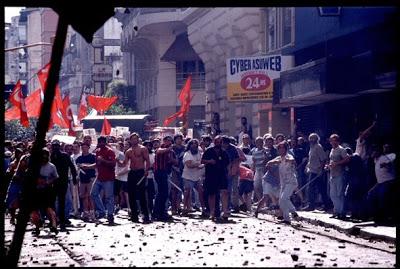 In December 2001 Argentina was caught by street protests when former President Fernando de la Rua froze bank accounts to pay off the country’s foreign debt. The continuing protests, street riots, and looting of shops caused De la Rua to resign as well as his successor Interim President Adolfo Rodriguez Saa. To end the country’s economic and political turmoil on New Year’s Day Argentina’s Legislative Assembly decided to appoint Eduardo Duhalde as Argentina’s new President until December 2003. Here Communistas throw rocks during a protest that turned into a riot between rival political parties. Photograph © 2002 Andrew Kaufman.
All of Them Must Go
By Naomi Klein / February 4, 2009

Watching the crowds in Iceland banging pots and pans until their government fell reminded me of a chant popular in anti-capitalist circles in 2002: “You are Enron. We are Argentina.”

Its message was simple enough. You–politicians and CEOs huddled at some trade summit–are like the reckless scamming execs at Enron (of course, we didn’t know the half of it). We–the rabble outside–are like the people of Argentina, who, in the midst of an economic crisis eerily similar to our own, took to the street banging pots and pans. They shouted, “¡Que se vayan todos!” (“All of them must go!”) and forced out a procession of four presidents in less than three weeks. What made Argentina’s 2001-02 uprising unique was that it wasn’t directed at a particular political party or even at corruption in the abstract. The target was the dominant economic model–this was the first national revolt against contemporary deregulated capitalism.

It’s taken a while, but from Iceland to Latvia, South Korea to Greece, the rest of the world is finally having its ¡Que se vayan todos! moment.

The stoic Icelandic matriarchs beating their pots flat even as their kids ransack the fridge for projectiles (eggs, sure, but yogurt?) echo the tactics made famous in Buenos Aires. So does the collective rage at elites who trashed a once thriving country and thought they could get away with it. As Gudrun Jonsdottir, a 36-year-old Icelandic office worker, put it: “I’ve just had enough of this whole thing. I don’t trust the government, I don’t trust the banks, I don’t trust the political parties and I don’t trust the IMF. We had a good country, and they ruined it.”

Another echo: in Reykjavik, the protesters clearly won’t be bought off by a mere change of face at the top (even if the new PM is a lesbian). They want aid for people, not just banks; criminal investigations into the debacle; and deep electoral reform.

Similar demands can be heard these days in Latvia, whose economy has contracted more sharply than any country in the EU, and where the government is teetering on the brink. For weeks the capital has been rocked by protests, including a full-blown, cobblestone-hurling riot on January 13. As in Iceland, Latvians are appalled by their leaders’ refusal to take any responsibility for the mess. Asked by Bloomberg TV what caused the crisis, Latvia’s finance minister shrugged: “Nothing special.”

But Latvia’s troubles are indeed special: the very policies that allowed the “Baltic Tiger” to grow at a rate of 12 percent in 2006 are also causing it to contract violently by a projected 10 percent this year: money, freed of all barriers, flows out as quickly as it flows in, with plenty being diverted to political pockets. (It is no coincidence that many of today’s basket cases are yesterday’s “miracles”: Ireland, Estonia, Iceland, Latvia.)

Something else Argentina-esque is in the air. In 2001 Argentina’s leaders responded to the crisis with a brutal International Monetary Fund-prescribed austerity package: $9 billion in spending cuts, much of it hitting health and education. This proved to be a fatal mistake. Unions staged a general strike, teachers moved their classes to the streets and the protests never stopped.

This same bottom-up refusal to bear the brunt of the crisis unites many of today’s protests. In Latvia, much of the popular rage has focused on government austerity measures–mass layoffs, reduced social services and slashed public sector salaries–all to qualify for an IMF emergency loan (no, nothing has changed). In Greece, December’s riots followed a police shooting of a 15-year-old. But what’s kept them going, with farmers taking the lead from students, is widespread rage at the government’s crisis response: banks got a $36 billion bailout while workers got their pensions cut and farmers received next to nothing. Despite the inconvenience caused by tractors blocking roads, 78 percent of Greeks say the farmers’ demands are reasonable. Similarly, in France the recent general strike–triggered in part by President Sarkozy’s plans to reduce the number of teachers dramatically–inspired the support of 70 percent of the population.

Perhaps the sturdiest thread connecting this global backlash is a rejection of the logic of “extraordinary politics”–the phrase coined by Polish politician Leszek Balcerowicz to describe how, in a crisis, politicians can ignore legislative rules and rush through unpopular “reforms.” That trick is getting tired, as South Korea’s government recently discovered. In December, the ruling party tried to use the crisis to ram through a highly controversial free trade agreement with the United States. Taking closed-door politics to new extremes, legislators locked themselves in the chamber so they could vote in private, barricading the door with desks, chairs and couches.

Opposition politicians were having none of it: with sledgehammers and an electric saw, they broke in and staged a twelve-day sit-in of Parliament. The vote was delayed, allowing for more debate–a victory for a new kind of “extraordinary politics.”

Here in Canada, politics is markedly less YouTube-friendly–but it has still been surprisingly eventful. In October the Conservative Party won national elections on an unambitious platform. Six weeks later, our Tory prime minister found his inner ideologue, presenting a budget bill that stripped public sector workers of the right to strike, canceled public funding for political parties and contained no economic stimulus. Opposition parties responded by forming a historic coalition that was only prevented from taking power by an abrupt suspension of Parliament. The Tories have just come back with a revised budget: the pet right-wing policies have disappeared, and it is packed with economic stimulus.

The pattern is clear: governments that respond to a crisis created by free-market ideology with an acceleration of that same discredited agenda will not survive to tell the tale. As Italy’s students have taken to shouting in the streets: “We won’t pay for your crisis!”

[Naomi Klein is an award-winning journalist and syndicated columnist and the author of the international and New York Times bestseller The Shock Doctrine: The Rise of Disaster Capitalism (September 2007); an earlier international best-seller, No Logo: Taking Aim at the Brand Bullies; and the collection Fences and Windows: Dispatches from the Front Lines of the Globalization Debate (2002).]

Source / The Nation (This article appeared in the February 23, 2009 edition of The Nation.)

1 Response to We Won’t Pay for Your Crisis !!