Weather Report : Houston, We Have a Problem 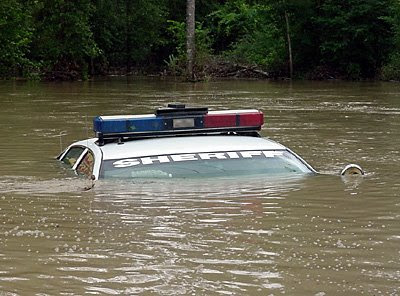 Law and water. Houston, we have a problem.

The intense storms, the ravaging floods. . . these are but one aspect of climate change, and according to prominent scientists. . . this is precisely what is anticipated for the Houston area, and indeed, the East Texas region.

For the last few days, it seems that every time I look at my inbox, I find another “breaking news” report from the Houston Chronicle, warning of another set of tornados, flash flooding, under water underpasses, electrical outages, and general weather havoc. Cohabitating in my inbox is a thread of discussion on a progressive political listserv in which numerous contributors continue to question the validity of climate change. The listserv originates in the Bayou City. Houston, we have a problem.

Posters debate what is not debatable, question science of which they have no knowledge, accept at face value that which they’ve heard on talk shows, and repeatedly, say that you have to make up your own mind on climate change, it’s just not that certain that it’s happening. The occasional voice of reason begs for reconsideration, but is dismissed for being willing to accept “propaganda.”

For this apparent conundrum I have one thought — look out your window. The intense storms, the ravaging floods, the frequency of all of it — these are but one aspect of climate change, and according to prominent scientists like Dr. Ron Sass (Rice University), who is a member of the Intergovernmental Panel on Climate Change, and Dr. Richard Seager (Columbia University), who is with the prestigious Lamont-Doherty Earth Observatory, this is precisely what is anticipated for the Houston area, and indeed, the East Texas region.

While climate change will present symptoms of increased aridity in regions of Texas west of IH 35, it’s predicted by the experts that all of East Texas will suffer the results in precisely the way they’re experiencing them now. And in case you missed the reports that came out a few weeks ago from preliminary talks on climate change — leading up to the Copenhagen meetings — this is here to stay for at least a thousand years. Such are the wages of carbon “sin.”

And what is on the “other side” of this argument? The fossil fuel industry, that’s what, disguised as a think tank here, or concealed as a scientific expert there, all while receiving fat paychecks from the industry itself. It’s the tobacco industry all over again, paying a handful of scientists to refute the obvious truth while thousands of scientists not so associated blew the proverbial whistle on the industry. Have we forgotten how that played out? If so, we’re experiencing a repeat. Seems that the system has had a few leaks, however–even the industry’s scientists were warning that climate change was for real, as Andrew Revkin recently wrote about in the New York Times.

The tragedy of it all is that as the industry’s front groups continued to obfuscate the discussion about climate change, and specifically, about the role of emissions in the form of greenhouse gases, the point-of-no-return loomed closer and closer, and the masses remained unmoved, lulled into complacency by clever industry propaganda and a deliberate campaign to belittle those voices calling for action.

Houston is not my favorite city — too much traffic, too much smog, too high a humidity, and too many hurricanes. But its residents, many lured by its rich artistic and cultural life, its melting-pot sense of opportunity for all, deserve the truth about climate change and its short-term and long-term effects on the city. Ringed by the very symbols of the fossil-fuel industry, it would suffer a very ironic fate were it to register high on the scale of victims of our drastically changing climate. That’s what scientists are predicting for the nation’s fourth-largest city, however — and that’s a problem for us all.