Welcome to the United States of Christianity 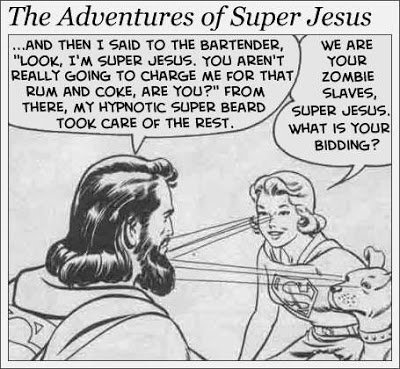 And the walls come tumbling down.
By Jeff Schweitzer / October 21, 2008

The last crumbling stones supporting the weakened wall separating Church and State have tumbled to ground. The Bush Administration no longer even pretends to honor the primary founding principle of our country. Religion has dominated Bush’s domestic and foreign policies from the start, but now Christianity has become a functioning arm of the federal government.

Bush has determined that he is above secular law, answerable only to god. We learn in a recently-disclosed memorandum, issued by the Department of Justice in 2007 but hidden until now, that King W declared himself able to bypass laws that forbid the use of taxpayer dollars to support religious groups hiring only like-minded faithful. Contemplate for a moment the significance and arrogance of that disdain for the rule of law. In subverting this particular bit of legislation, Bush has removed the last vestiges of secularism from our government. Despite the best efforts of our Founding Fathers, the United States is now officially a Christian Nation.

The memorandum granting Bush these extraordinary powers to topple our Constitution has a bad odor and sour taste but good pedigree in Bush’s long war on reason. In a perverted twist of logic, the memo concludes absurdly that even federal programs clearly covered by anti-discrimination laws can fund groups that blatantly discriminate against those who share a different faith. Giving taxpayer dollars to one sect that allows no non-sect members into the club is establishing religion. The First Amendment explicitly and precisely prohibits such acts. But to Bush the Constitution is nothing but old parchment to be ignored at will, whenever convenient.

Listen to the sick arguments made in defense of a deep intrusion of religion into government. Bush granted $1.5 million to World Vision, a group that has an open policy of hiring only fellow Christians. The money comes from a Justice Department program that prohibits the use of funds for any group that uses discriminatory hiring practices. Immediately that would disqualify World Vision from this DOJ pot of tax dollars. Well, then, how did Bush fund World Vision when clearly prohibited by law from doing so? The Justice Department invoked a 1993 law, the Religious Freedom Restoration Act, which allows for some exceptions to anti-discrimination legislation if a federal statute would create a substantial barrier to the free exercise of religion. In other words, Bush argued that by not giving $1.5 million to World Vision, the federal government would create a “substantial burden” on that organization’s right to practice its religion. Only with complete surrender to faith, and by cutting all ties to logic, could that argument be made palatable. The bizarre conclusion is that the lack of federal dollars itself creates a burden to religious practice.

Bush has inverted the idea of separating Church and State. The default position now is that Church and State are one and the same, and that the two shall be separate only under extraordinary circumstances. Taxpayers must now fund discriminating religious organizations as a normal function of government. If we do not send our money to these organizations, we are preventing them from practicing their religion. By this perversion of our Constitution, anything less than open funding for religion would prohibit the free exercise thereof, destroying the words and meaning of the First Amendment.

Let us be clear about the ramifications here. The pillars on which this amazing country was built have been shaken by a powerful earthquake of anti-secularism. We are becoming ever more like the theocracies of the Middle East we claim to disdain. The logic, impetus, and drive to form these United States into a functioning union are now under attack. We should all tremble in fear as the ground shifts beneath us. Be afraid. Be very afraid for the future of our country. Iran is not a good model for us to follow.

This entry was posted in RagBlog and tagged Christianity, Religion, Secular State, Theocracy. Bookmark the permalink.

1 Response to Welcome to the United States of Christianity