We’re Profoundly Sickened by the Extent of This 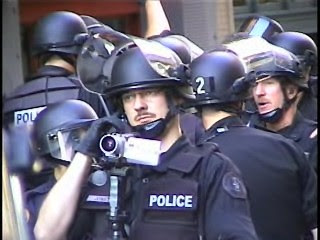 Maryland State Police officers spied on dozens of meetings and rallies held by social activist groups and provided reports to databases accessible by local and federal law enforcement agencies, according to documents obtained by the ACLU of Maryland.

Officers with MSP’s Homeland Security and Intelligence Division covertly spent at least 288 hours primarily at anti-war and anti-death penalty protests between March 2005 and May 2006, according to the redacted documents released Thursday.

The state branch of the American Civil Liberties Union received the documents after filing suit against MSP last month for not releasing the reports under the Maryland Public Information Act. The ACLU originally requested the documents in 2006 in connection with the trial of peace activists arrested during a protest outside of the National Security Agency in Fort Meade.

“It is incomprehensible to investigate the most all-American of activities without a scintilla of evidence that something criminal was going to happen,” said David R. Rocah, a staff attorney with the ACLU of Maryland, during a news conference Thursday.

The ACLU sent a letter to Gov. Martin O’Malley asking for a full investigation of the MSP’s practices, Rocah said. Further legal action will depend on how the state responds, he added.

“It would be extraordinarily surprising if what is revealed today is the full scope,” Rocah said

The governor’s office directed questions to state police officials. Col. Terrence B. Sheridan, superintendent of the Maryland State Police, said in a statement the department does not violate civil liberties of law-abiding protesters or organizations.

“No illegal actions by State Police have ever been taken against any citizens or groups who have exercised their right to free speech and assembly in a lawful manner,” he said. “Only when information regarding criminal activity is alleged will police continue to investigate leads to ensure the public safety.”

The reports read like meeting minutes, with attendance figures and recaps of events held by groups including the Pledge of Resistance-Baltimore, the Baltimore Coalition to End the Death Penalty, the Committee to Save Vernon Evans (who was granted a stay of execution by the Maryland Court of Appeals in February 2006), the D.C. Anti-War Network and International Socialist Organization.

On Jan. 28, 2006, for example, an undercover officer attended an anti-death penalty rally in Annapolis.

“There were approximately 70 people at the rally which lasted approximately 1½ hours. The group met at church circle, walked around the Governor’s Mansion and then finished the rally at Lawyer’s Mall with speeches,” according to the report entered Feb. 20, 2006. “No intelligence about any disturbances at upcoming protests in the run-up to the execution was discussed.”

The reports specifically mention they were shared with police officers from Baltimore, Annapolis, Anne Arundel and Baltimore counties and the National Security Agency.

“This isn’t just that local and state police have it. It’s accessible by the national intelligence community,” said Michael German, a policy counsel with the national ACLU based in Washington and a former domestic terrorism official with the Federal Bureau of Investigation.

Similar reports of police spying have occurred in Denver and Northern California, according to the ACLU. German also pointed to the Los Angeles Police Department earlier this year adopting a system of officers reporting suspicious activities in their regular investigative reports, which can later be analyzed.

Rocah, who called MSP’s actions “unacceptable” and “stupefying,” said the problem is not just that spying has occurred but that it led activists to be suspicious of one another.

“It breeds distrust from within, which is exactly the point,” he said.

Maria Allwine, a member of Pledge of Resistance-Baltimore, said members of her group would not turn on each other. The organization is part of a national network that seeks to end the war in Iraq.

The group holds open meetings Monday nights at the American Friends Service Committee building off York Road. Allwine said she noticed informants at meetings in 2003 and 2004, “provocateurs” who may have been “a little too enamored with the military” or blatantly walked across the street afterward to use their cell phones. The group assumes it’s still being spied on, she added.

The ACLU’s findings were not shocking, Allwine said, but seeing the detailed reports still had an impact.

“I’m profoundly sickened by the extent of this,” she said.