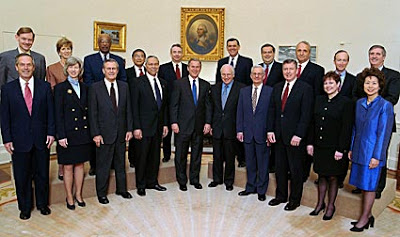 Just a few war criminals here … Bush Cabinet, 2001.
Moderation in the pursuit of justice is no virtue
By Joseph L. Galloway / November 18, 2008

With two months still to go before his inauguration as the 44th President of the United States, Barack Obama and his transition team are already getting off on the wrong foot, signaling that they have no intention of investigating anyone in the Bush administration for possible war crimes.

What we’re talking about here is the torture of detained terrorist suspects in American custody in a grotesque violation of both our treaty obligations under the Geneva Conventions and our historic principles as a democratic nation.

By their own machinations and attempts to redefine and pervert both treaties and our own laws, President Bush, Vice President Dick Cheney, former Defense Secretary Donald H. Rumsfeld, Attorneys General John Ashcroft and Alberto Gonzales, Cheney’s chief of staff David Addington and any number of lesser suspects sought to shield themselves from, or put themselves above, justice.

They did so knowing full well that what they were doing — clearing the way for interrogators at Guantanamo and in the Central Intelligence Agency’s secret dungeons around the world to do anything it took, short of murder, to extract information from terror suspects.

The “harsh interrogation methods” included water-boarding, stripping and humiliating prisoners, subjecting them to extremes of temperature, putting them into stressful physical positions for hours, the use of psychotropic drugs and doubtless other equally uncivilized practices.

Water boarding has always been treated as a criminal act in this country. Military officers were court-martialed at the turn of the last century for water boarding Filipino guerrillas. More recently, an East Texas sheriff was sentenced to 10 years in federal prison for water boarding a suspect and extracting a confession from him.

Moderation in the pursuit of justice is no virtue, and its no way to begin an administration that was elected on promises of change. What it says is that if you’re one of the elite and powerful, your violations of the law will be overlooked, no matter how much damage you did to our country’s standing in the world.

What signal does it send to Mr. Bush’s gang of unindicted co-conspirators, who’ve unwrapped a Pandora’s boxful of other offenses — from perverting the administration of justice, to illegally eavesdropping on the phone conversations and e-mails of ordinary Americans, to salting the stream of intelligence with bogus material, to inviting their cronies to loot the Treasury with no-bid military contracts, to lying under oath to congressional oversight committees, to applying political litmus tests to the hiring of civil service employees to the wholesale destruction of White House e-mails and records? Etcetera. Etcetera.

This nation was founded on the principle of equal justice under the law. No one — no one — ought to be able to skate or hold a get-out-of-jail-free card by virtue of having been the most powerful felon in the land, or of working for him.

This signal on torture investigations says that Sen. Obama wants to start his administration as a uniter, not a divider, trying to untangle the unholy mess that the Decider and Co. are leaving behind them in the economy, in our military, in virtually every walk of our national life. It speaks to his desire to reach across the aisle to the defeated Republicans and try to bring them back into the fold as Americans.

That’s all well and good, but not if it comes at the cost of lifting the blindfold off Justice’s eyes and letting her pick and choose who’ll pay for criminal acts and who won’t. That’s no way to begin, and no way to continue.

Out in West Texas, crusty old ranchers plagued by coyotes killing their calves and baby sheep shoot the offending beasts and hang their carcasses on the nearest barbed wire fence as an object lesson to the rest of the pack.

Unless the newly empowered Democrats in the White House and on Capitol Hill hang a few coyotes on some fences in Washington, D.C., they’re making a huge mistake that will come back to haunt them, and all the rest of us, too.

Unless the truth, the whole truth, is unearthed, justice is done and the Republican closet is emptied of festering transgressions, the next pack will do it again, secure in the knowledge that their positions will protect them from the penalties that more ordinary citizens must pay for the same crimes.

If their desires aren’t satisfied — if the new broom sweeps no cleaner than the old one — the next time around they may move things up a notch and throw all the bastards out — and they’d be fully justified in doing so.