What Are We So Afraid Of? 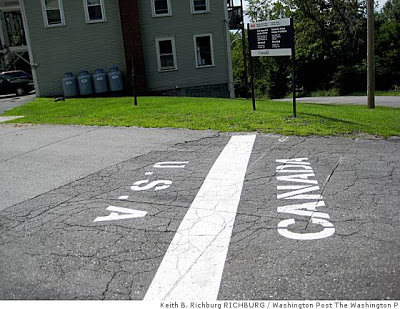 DERBY LINIE, Vt. — The changes started coming slowly to this small town where the U.S. border with Canada runs across sleepy streets, through houses and families, and smack down the middle of the shared local library.

First was the white, painted lettering on the pavement on three little side streets – “Canada” on one side, “U.S.A.” on the other. Then came the white pylons denoting which side of the border was which. After that, signboards were erected on some streets, ordering drivers to turn back and use an officially designated entry point.

And along with the signposts came an influx of American Border Patrol agents, cruising through the town in their sport-utility vehicles with sirens, chasing down cars and mopeds that ignored the posted warnings.

For longtime residents accustomed to a simpler life that flowed freely across a largely invisible border, the final shock – and what made most people really take notice – was a proposal by the border agents last year to erect fences on the small streets to officially barricade Derby Line from Stanstead, Quebec, and neighbor from neighbor.

“They’re stirring up a little hate and discontent with that deal,” said Claire Currier, who grew up in this border area and works at Brown’s Drug Store, which has operated on the same spot since 1884. “We’ve all intermingled for years.”

For the Department of Homeland Security, the changes are part of a gradual fortification of America’s northern border that began shortly after the Sept. 11, 2001, terrorist attacks and has accelerated in recent years.

The hardening of the northern frontier is unsettling to many in the small towns along the border. For as long as most of these people can remember, the line between the United States and Canada has been little more than a historic curiosity, rather than the hard and fast demarcation that is America’s southern border.

Named the Secure Border Initiative, the project calls for more than tripling the number of agents along the northern border, adding boats and helicopters, and deploying sophisticated new technology including hundreds of millions of dollars in new communications equipment, radiation detectors and three different types of camera-mounted sensors in the uninhabited wooded areas.

“It was freer before, but we live in a different world now,” said agent Mark Henry, the operations officer at the Border Patrol’s Swanton Sector, headquartered in Swanton, Vt. The sector encompasses about 24,000 square miles, extending from the town of Champlain, in upstate New York, on the east all the way across to the border with Maine. The sector now has 250 agents, up from 180 three years ago, and the number is scheduled to reach 300 next year. In 2001, there were 340 agents along the entire border with Canada.

“9/11 changed everything,” said Border Patrol agent Fernando Beltran, the operations chief for Swanton Sector’s Newport station, which includes Derby Line. “This may have been Mayberry before, but it’s not anymore.”

Residents of this town of 776 understand the need for enhanced security. They also wistfully remember a time when neighbors easily crossed into another country to visit neighbors. People went to church and to school on either side of the line. Members of the same family lived on either side. Some streets, an old factory, the local library and opera house, and a few houses straddle the line.

Townsfolk are concerned about practical issues with fences. The two sides share a water system, a sewer system and snow-removal services. For years, the fire departments of both sides have helped each other without regard to a border, and fences, they fear, might disrupt travel routes for emergency vehicles.

“It hasn’t been an easy issue for either side to digest,” said lifelong resident Karen Jenne, the Derby Line town clerk and treasurer. “But we understand that Border Patrol and Homeland Security have a job to do.”

The new vigilance has led to more arrests of people crossing illegally and interdiction of contraband, mostly drugs. Border agents in this sector said that last year they arrested people from 117 different countries trying to enter the United States illegally.

The resources here are still a small fraction of what is deployed on the southern border with Mexico. But with the increased Border Patrol presence, the North is starting to look more like what border residents of Texas, California and Arizona have been seeing for years.

This entry was posted in RagBlog and tagged Border Searches, Border Wall, War on Terror. Bookmark the permalink.

1 Response to What Are We So Afraid Of?