What George Orwell Wrote, 70 Years Later to the Day 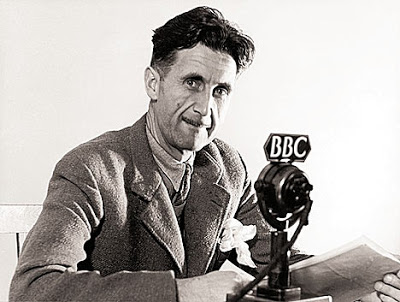 George Orwell, author of 1984 and Animal Farm.
‘”I think he would have been a blogger,” said Jean Seaton, a professor at the University of Westminster in London’
By Noam Cohen / August 24, 2008

Aug. 12 began as a hot morning in Aylesford, Kent, England, only to be followed by a powerful thunderstorm in the afternoon. Meanwhile, the blackberries were beginning to redden.

The observations were made by George Orwell, whose copious diaries are now being published every day in blog form, exactly 70 years after they were made. The scholars behind the project say they are trying to get more attention for Orwell online and to make him more relevant to a younger generation he would have wanted to speak to.

“I think he would have been a blogger,” said Jean Seaton, a professor at the University of Westminster in London who administers the Orwell writing prize and thought up the idea of the blog.

Though as prolific as any blogger (his collected writings occupy some 20 volumes), Orwell, who died in 1950, never had the chance to spontaneously publish his thoughts to a waiting public. Now — with some lag time — they are being made available that way at Orwell Diaries.

The Webmaster has included hyperlinks, including a definition of blackberries (no, not the kind you operate with your thumbs) and a Google map of the sanitarium in Kent in southeast England where Orwell was recuperating from tuberculosis and observing the weather so closely.

The entry from Aug. 10, for instance, is offers this report: “Drizzly. Dense mist in evening. Yellow moon.”

Rest assured, he will soon become consumed by the clouds gathering over Europe. Next month the blog will reprint the entries from the political diary he started Sept. 7, 1938.

Like any good political blogger, Orwell devoured the news, making clippings and looking for shifts in public and government opinion, Professor Seaton said. “He’s partly obsessed by the newspapers because of the start of the world war,” she said. “The diary is written against this almost traumatized understanding that there is going to have to be a second world war.”

The material being reprinted (with the permission of the Orwell estate) can be found in the Orwell archive at University College in London and in the author’s collected works, but “ordinary people won’t go to it,” she said. “I thought, if you publish what he wrote as he wrote it in real time, people would find that rather engaging.”

Professor Seaton said the site would publish at least until 2010, and had more than 50,000 page views since it started on Aug. 9.

The Orwell blog is not the only effort to inject spontaneity into material written generations ago.

For more than a year, Bill Lamin, 60, a retired mathematics teacher in England, has been publishing the letters of his grandfather, who fought in World War I — 90 years to the day.

Part of the attraction for readers, Mr. Lamin said in an e-mail message, was that “no one knows the outcome, whether he lives or dies from letter to letter.”

While the Orwell blog will not have that level of suspense, Professor Seaton said the material was full of tension.

Everything in Suffolk is much more dried-up than in Kent. Until the day we arrived there had been no rain for many weeks & various crops had failed. Near S’wold saw several fields of oats & barley being harvested which had grown only 1’ or 18” high. Ears nevertheless seemed normal. Wheat crop all over the world said to be heavy.
A bedstraw hawk-moth found in our back garden & mounted by Dr Collings¹. Evidently a straggler from the continent. Said to be the first seen in that locality for 50 years.
Little owl very common round here. Brown owl does not seem to exist.
Dr C. says the snake I caught was the “smooth snake”, non-poisonous & not very common.
Today hot again.
Gipsies beginning to arrive for the hop-picking. As soon as they have pitched their caravans the chickens are let loose & apparently can be depended on not to stray. The strips of tin for cloth-pegs are cut of biscuit boxes. Three people were on the job, one shaping the sticks, one cutting out the tin & another nailing it on. I should say one person doing all these jobs (also splitting the pegs after nailing) could make 10-15 pegs an hour.
Another white owl this evening.

One Response to What George Orwell Wrote, 70 Years Later to the Day