What Scott McClellan (and Jay Rockefeller) Didn’t Tell Us 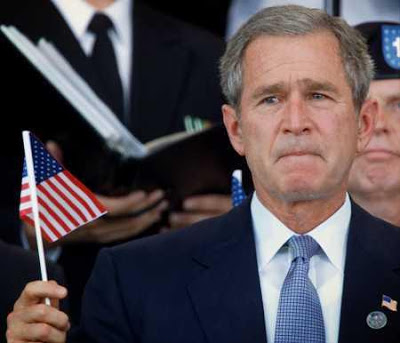 That is the truth, but not the whole truth, and the backstory is no less appalling.

As much as seven months before the terrorist attacks of September 11, 2001, the Administration was deeply involved in planning and mobilizing for the invasion and military occupation of both Iraq and Afghanistan. None of the activity was remotely related to Osama bin Laden or counterterrorism of any stripe.

This is the fundamental truth, it is beyond dispute, and it is fully documented.

The incursions into Afghanistan and Iraq were premeditated, hegemonic wars of conquest and territorial occupation, to gain the geostrategic control of Middle Eastern energy resources. Bald acts of unprovoked military aggression, they are direct violations of the charter of the United Nations. The wars are therefore international crimes, but they were not undertaken until the horror of September 11, 2001 provided a spectacular smokescreen. A fraudulent label–the “war on terror”—was concocted to disguise the premeditated violence, and it was quickly unleashed.

Beginning in 1992 and spanning the two Bush Administrations, repeated written proposals to invade Iraq were prepared and issued. Four men who served in both Administrations—Richard Cheney, Lewis “Scooter” Libby, Paul Wolfowitz, and Zalmay Khalilzad—were the source of the first proposal (expressly seeking “…access to vital raw materials, primarily Persian Gulf oil”) and direct participants in the iterations to follow. Herein is the story of the origin and development of the Project for the New American Century and its tragic ideology of American global hegemony.

(For an excellent treatment of this history, see “Empire Builders: Neoconservatives and Their Blueprint for U.S. Power,” in the Christian Science Monitor, June, 2005.)

On January 20, 2001, 29 members of the Project for the New American Century joined the incoming Bush Administration at the highest levels—notably including Richard Cheney as Vice President, Libby as his Chief of Staff, Donald Rumsfeld as Secretary of Defense, and Wolfowitz as Rumsfeld’s Deputy. The PNAC triumphed when the National Security Council ten days later, on January 30, legitimized the invasion of Iraq.

(Read an account of the meeting in Ron Suskind’s book, The Price of Loyalty: the White House and the Education of Paul O’Neill.)

Four days later, on February 3, 2001 the Security Council received a top-secret memorandum from a “high level official.” The memo “…directed the NSC staff to cooperate fully with [Richard Cheney’s] Energy Task Force as it considered the ‘melding’ of two seemingly unrelated areas of policy: ‘the review of operational policies toward rogue states’ such as Iraq, and ‘actions regarding the capture of new and existing oil and gas fields.’”

By early March, 2001, Cheney’s Energy Task Force was studying maps of the Iraqi oil fields, refineries, pipelines, and tanker terminals, and lists of the foreign oil companies—none of which were American or British majors—negotiating with the Hussein regime for exploration and development rights.

(See the maps and the lists.)

At least a year before the invasion, the State Department was designing the deconstruction of Iraq’s nationalized oil industry.

In January of 2007 President Bush, in announcing the troop surge, demanded as a mandatory “benchmark” the enactment of the hydrocarbon law by the Iraqi Parliament.

(See a at transcript of the speech.)

Exxon/Mobil, Conoco/Phillips, Royal Dutch/Shell, and BP/Amoco are now poised to profit immensely from 81% of Iraq’s undeveloped crude when the hydrocarbon law is passed.

Meanwhile, the UK Independent reported on June 21, 2008 the imminent signing of three $500 million contracts with Exxon/Mobil, Royal Dutch/Shell, and BP/Amoco by the Iraqi Oil Ministry. These are repair and technical “service contracts” covering some of Iraq’s largest oilfields. The companies can elect to be paid in crude oil.

Upon taking office, the Bush Administration brushed off explicit warnings about al Qaeda and Osama bin Laden. Counterterrorism was nowhere on the new Administration’s agenda. (Read Richard Clarke, Against All Enemies: Inside America’s War on Terror.)

Instead, throughout the spring and summer of 2001 the Bush Administration, on behalf of the Unocal Corporation, was negotiating with the Taliban for pipeline rights-of-way across Afghanistan. A rich package of foreign aid was offered, but the negotiations failed.

Finally, after threatening the Taliban—“Accept our offer of a carpet of gold or we bury you under a carpet of bombs”—the Bush Administration notified Pakistan and India it would attack Afghanistan “before the end of October.” This took place five weeks prior to the events of 9/11.

(Sources: Anon., “Afghanistan: A Timeline of Oil and Violence,” , and Larry Chin, “Parts I and II: Players on a rigged chessboard: Bridas, Unocal, and the Afghanistan pipeline,” Online Journal, March, 2002.)

On October 7, 2001 the “carpet of bombs” was delivered to Afghanistan as threatened and on schedule. Mr. Hamid Karzai, a former Unocal consultant, was soon installed as President of the country. The first U.S. ambassador was John J. Maresca, a Unocal vice president. He was succeeded by Zalmay Khalilzad, another former consultant for Unocal. (See “Oil War III: the Engineering of Oil Profits Through War and Arbitrary Monetary Standards,”; and “Afghanistan: A Timeline of Oil and Violence,” cited above.)

On February 8, 2002, four months after the carpet of bombs, Presidents Hamid Karzai and Perves Musharraf sign an agreement for a pipeline across Afghanistan and Pakistan.

Within a year an oil industry trade journal reports the Bush Administration is standing ready with financing to build the pipeline and to protect it with a permanent military presence. (See Alexander’s Gas and Oil Connections, February 23, 2003.)

On June 22, 2008 the Toronto Sun reported the signing of a “major deal” by Afghanistan to build an $8 billion, 1,680km pipeline, called “TAPI.” (The Turkmenistan-Afghanistan-Pakistan-India pipeline.) Construction will begin “…once Taliban forces are cleared from the pipeline route by U.S., Canadian, and NATO forces.” (See Eric Margolis, “These Wars Are About Oil, Not Democracy,” Toronto Sun, June 22, 2008.)

The objectives of the “war on terror,” were twofold, we were told: to apprehend Osama bin Laden in Afghanistan and to effect a change of regime in Iraq.

But the trademark deceit of the Bush Administration was involved here, too. Osama bin Laden could have been brought to justice easily and without armed conflict, and regime change in Iraq could have been achieved with equal facility.

Awaiting on his desk when George Bush took office was a standing offer from the Taliban to surrender Osama bin Laden. (This had been negotiated by the Clinton Administration after the bombing of the U.S.S. Cole.) Intent on the invasion and military occupation of Afghanistan, however, the Bush Administration rejected the handover three times before 9/11 and twice thereafter. (The tragic speculation: with bin Laden in custody early in 2001, could 9/11 have been avoided?)

Saddam Hussein, hoping to forestall warfare, yielded a series of increasingly attractive concessions to the Bush Administration, finally offering to leave his country for exile in Egypt. Intent as well on the invasion and military occupation of Iraq, the Administration ignored the offer.

(Sources: George Monbiot, “Dreamers and Idiots: Britain and the US did everything to avoid a peaceful solution in Iraq and Afghanistan,” The UK Guardian, November 11, 2003,; and Anon., “Llego el momento de deshacerse de Saddam,” El Pais (Spain), September 26, 2007. This is a transcript of a conversation between George Bush, Condoleezza Rice, and Spanish Prime Minister Jose Maria Anzar in Crawford, Texas, February 22, 2003. The President acknowledges the prospective exile, but vigorously rejects it, declaring, “We will be in Baghdad at the end of March.”)

Plainly there is a huge disconnect between the incursions into Afghanistan and Iraq and the terrorist attacks of 9/11. But the Bush Administration knowingly and dishonestly joined them into the fraudulent conflation known as the “war on terror.”

This is not a “war on terror.” Afghanistan and Iraq today are occupied countries, administered by puppet governments and dotted with permanent military bases securing the energy assets. Not a by-product of the Bush Administration’s warmaking, this was its purpose.

The Congress is at least vaguely aware. The Defense Authorization Act of 2008 included a Section 1222, prohibiting expenditures for the “permanent stationing of United States Armed Forces in Iraq,” or “to exercise United States control of the oil resources of Iraq.”

Richard W. Behan lives and writes on Lopez Island, off the northwest coast of Washington state. He has published on various websites over two dozen articles exposing and criticizing the criminal wars of the Bush Administration. The work is summarized in an electronic book, The Fraudulent War, available in PDF format