What We Don’t Read About Abkhazia’s Fight for Independence 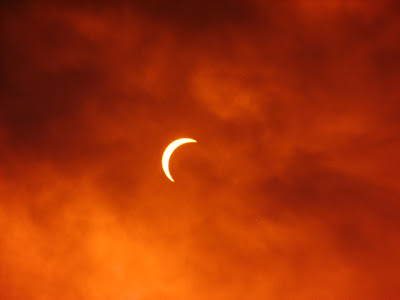 The sun also shines (and hides): ‘It was only a partial eclipse in Tbilisi–but it was total in western Georgia, and supposedly perfect in separatist Abkhazia, Georgia’s westernmost province,’ according to Ben Wheeler, posted on March 29, 2006. Photo by John “Pachydon” Mackedon.
‘All this trumpeting of Georgian sovereignty is quite exaggerated’
By Gerry Storm / The Rag Blog / August 25, 2008

What we aren’t getting in the way of news is that Abkhazia fought a brutal war to resist becoming part of Georgia, hates the Georgians, wants to be an independent state, and an ally of Russia. They use rubles for currency, welcome Russian aid, and much of their population is Russian.

The country is still an unreconstructed mess after the Georgians virtually destroyed it after the Abkhazians refused to be good Georgians.

I would presume that something similar is going on in South Ossetia.

All this trumpeting of Georgian sovereignty is quite exaggerated and promoted by the Bushies who made lots of promises to Georgia without checking the history of the place. The Russian position of backing both provinces as independent states is quite popular in the region.

This entry was posted in Rag Bloggers and tagged Abkhazia, Georgia, Russia, Solar Eclipse, Wars of Independence. Bookmark the permalink.