What Will We See with the Democratic Majority? Probably Not Much … 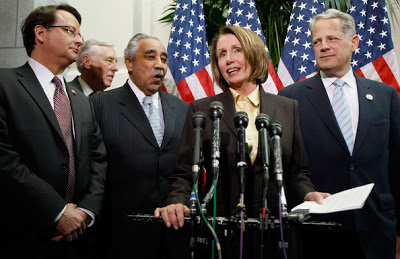 NEW YORK – The defection of Pennsylvania’s Arlen Specter and the imminent certification of Al Franken as the winner of Minnesota’s election recount has handed Democrats what they always said they lacked in order to pass a progressive agenda: a filibuster-proof majority in the U.S. Senate. Now they face the awful problem of coming up with new excuses for not doing anything.

How will Obama, Nancy Pelosi, Harry Reid and other fake liberals weasel out of making good on their promises for real action on healthcare, the economy and the war? It won’t be easy. They control both houses of Congress and the White House. Obama is about to fill a new vacancy on the Supreme Court. The Times of London writes that “Mr. Obama, by some assessments, has more political leverage than any president since Franklin Roosevelt in 1937”–at the peak of the New Deal, just before he overreached by trying to pack the Supreme Court.

The Republican Party, on the other hand, is suffering a crisis of faith–too much God-cheering and not enough adherence to core values like small government, fiscal conservatism, isolationism and protectionist trade policy. A mere 21 percent of Americans still call themselves Republicans, the lowest number since 1983. Similarly, reports the latest ABC News/Washington Post poll, “just 21 percent say they’re confident in the Republicans in Congress ‘to make the right decisions for the country’s future,’ compared with 60 percent who express that confidence in Obama.”

Democrats have never been as powerful. Republicans are weak. Obama won with a decisive, sweeping rejection of the Republican status quo. Harry and Louise, call your agents–socialized medicine is on the way! Not.

Well, yes. What passes for the left in this country (center-right everywhere else, because they read) now has some not-unreasonable questions for Barack Obama. Such as:

Pretty please, can we now live in a country where people don’t have to spend $800 a month to health insurance companies that deny their customers’ claims?

Why are we still in Iraq?

How about some help for the victims of Katrina, many of whom never collected one red cent after losing everything?

Why are we paying billions to banks and still letting them gouge us with 25 interest credit card rates? Speaking of which:

How about doing something that might actually help people who live in the economy, rather than just capital markets?

These queries seem all the more relevant coming, as they do, from the liberal base of the Democratic party–the people who got Obama elected.

The trouble for our cute, charming prez is that he has no intention whatsoever of introducing a true national healthcare plan: one that covers everybody for free. He wants to expand the war in Afghanistan and drag out the one against Iraq. He will not punish Bush or his torturers, rescue homeowners in foreclosure, or nail scumbag banks to the wall. These changes would cost trillions of dollars to multinational insurance companies, defense contractors and other huge financial concerns who donate generously to candidates of both political parties and have a history of using their clout to manipulate elections in favor of their favorite candidates. A classic example is oil companies, who push down gas prices before elections in order to help Republicans.

The most that Democratic voters can expect from Democratic politicians is incremental, symbolic change that doesn’t cost their corporate sponsors any serious coin. The New York Times marked Obama’s 100th day in office with an editorial that approvingly encapsulated his accomplishments to date: “He is trying to rebuild this country’s shattered reputation with his pledge to shut down the prison camp in Guantánamo Bay, Cuba, his offer to talk with Iran and Syria, and, yes, that handshake with Venezuela’s blow-hard president, Hugo Chávez…The government is promoting women’s reproductive rights. It is restoring regulations to keep water clean and food safe. The White House has promised to tackle immigration reform this year.”

Guantánamo isn’t being closed; it’s being moved. Gitmo’s detainees will be transferred to a new harsher gulag under construction in Afghanistan. Thawed relations with Iran and Syria would create new business opportunities for big oil. Defending the right to an abortion is popular and doesn’t cost Bank of America a dime. Immigration reform is code for legalizing illegal immigrants, not closing the border. Safety regulations reassure consumers and pump up the economy. Closing the border would raise wages. Corporations won’t allow that.

Unfortunately for Obama’s Democrats, small-bore initiatives only go so far, especially with the economy in meltdown. When people are desperate and angry they don’t care as much about flag-burning or creationism or a handshake with Hugo Chávez. They want action–real action.

How will the Democrats avoid genuine change now that they enjoy the ability to enact it? Will they blame obstructionist Republicans? Will Democrats cross the aisle to vote with the Republicans? A new war, perhaps?

If nothing else, whatever dog-ate-my-homework excuse they come up with for sitting on their butts is bound to be amusing. If nothing else.

[Ted Rall is the author of the new book “Silk Road to Ruin: Is Central Asia the New Middle East?,” an in-depth prose and graphic novel analysis of America’s next big foreign policy challenge. Visit his website www.tedrall.com.]