When I Covered My First Democratic Convention: Chicago 1968 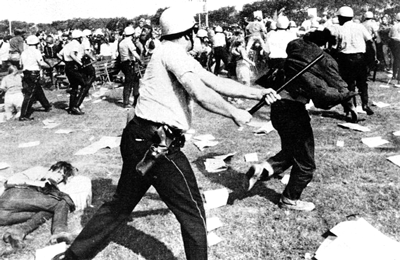 Chicago cops brutally attack demonstrators (and journalists, and bystanders) outside Democratic Convention, 1968.
‘It culminated in the crushing of Sen. Eugene McCarthy’s anti-Vietnam crusade inside the convention hall and the cracking of peacenik skulls by Mayor Richard Daley’s police in the streets’
By Greg Mitchell / August 21, 2008

NEW YORK — With the 2008 Democratic national convention about to begin in Denver, I can’t help recalling the first DNC that I covered in 1968, exactly 40 years ago next week. Yes, it was the infamous gathering in Chicago, when the conflict turned bloody. I never made it inside the convention hall — but I did grab a front row seat for what “went down,” as we used to say.

It culminated in the crushing of Sen. Eugene McCarthy’s anti-Vietnam crusade inside the convention hall and the cracking of peacenik skulls by Mayor Richard Daley’s police in the streets. Together, this doomed Hubert Humphrey to defeat in November at the hands of my old hero, Richard Nixon.

I’ve been a political-campaign junkie all my life. At the age of 8, I paraded in front of my boyhood home in Niagara Falls, N.Y., waving an “I Like Ike” sign. Four years later, in 1960, I represented Nixon in a 7th grade debate, and when the votes were counted, Kennedy had carried the class by about 20-2. Traumatized, I’ve never publicly endorsed a candidate since. But in 1968 I got to cover my first presidential campaign when one of Sen. McCarthy’s nephews came to town, before the state primary, and I interviewed him for the Niagara Falls Gazette, where I worked as a summer reporter during college.

My mentor at the Gazette was a young, irreverent City Hall reporter named John Hanchette. He went on to an illustrious career at other papers, and as a Pulitzer Prize-winning national correspondent for Gannett News Service, but back then he was best known for his weekly column. It featured a comic creation known as “Falls Street Louie,” who had all the inside dirt on the local politicos.

Hanchette was in Chicago that week to cover party politics as a Gazette reporter and contributor to the Gannett News Service (GNS). I was to hang out with the young McCarthyites and the anti-war protestors. To get to Chicago I took my first ride on a jetliner.

To make a long story short: On the climactic night of Aug. 28, 1968, Hanchette and I ended up just floors apart in the same building: the Conrad Hilton Hotel in downtown Chicago. I was in McCarthy headquarters and Hanchette was in one of Gannett’s makeshift newsrooms. Probably at about the same time, we pulled back the curtains and looked out our separate windows to see police savagely attacking protestors with nightsticks at the intersection directly below.

Besides writing his own stories, Hanchette was expected to “run” copy from columnist Dave Beetle to GNS at the convention hall. Also on hand in that room was the GNS fashion writer, who was composing a piece on Muriel Humphrey’s wardrobe. After spotting the carnage in the streets, Hanchette recalls asking Beetle to come to the window for a look. The older reporter didn’t seem that impressed until tear gas started seeping into the room through the vents. Then Beetle said, “Hmm, this may be serious.”

Like me, Hanchette headed for the streets. By that time, the peak violence had passed, but cops were still pushing reporters and other innocent bystanders through plate glass windows at the front of the hotel.

While I screwed up my courage and crossed to Grant Park where the angry protest crowd gathered, Hanchette hailed a gypsy cab and headed for the convention hall out by the stockyards. When he got to the Gannett tent he told GNS honcho John C. Quinn what he had seen and suggested that the bad-cop angle should lead the wire report. Quinn was not always confident about the young Hanchette’s news judgment, based on his earlier suggestion that an interview with Allen Ginsberg (or the Yippies nominating Pigasus the Pig for president) should play prominently on the GNS wire.

But dramatic film footage of what would later be labeled a “police riot” had just hit network TV, so Quinn went with it.

When we returned to Niagara Falls that Friday, we each wrote columns for that Sunday’s paper. I described the eerie feeling of sitting in Grant Park, with machine guns on Army Jeeps pointed at the crowd, and thousands around me yelling at the soldiers and the media, “The whole world is watching!” — and knowing that, for once, it was true.

Regretfully, Hanchette told his readers that Falls Street Louie would not be filing a report. Hanchette had sent him home early. Mayor Daley’s Chicago was just a little too dangerous for Louie.

More than 35 years later, after I had written two books on other infamous political campaigns, I returned to Chicago for a staged performance of a musical based on one of them. As I got out of a cab to make my way to the theater, I had an eerie feeling and, sure enough, looking up the street I noticed Grant Park a block away– and the very intersection in front of the Hilton where skulls were cracked that night in 1968.

Greg Mitchell is editor of Editor and Publisher. Among his nine books are: “The Campaign of the Century” (about Upton Sinclair’s race for governor of California in 1934) and “Tricky Dick and the Pink Lady” (the Nixon-Douglas contest in 1950). His latest book on Iraq and the media is “So Wrong for So Long.”