Who Needs Watergate? We’ve Got Joe the Plumber! 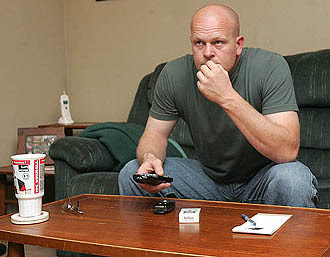 If you watched the third and final presidential debate last night you know that there were many mentions of “Joe the Plumber.” Joe is actually Joe Wurzelbacher, an ‘everyman’ who appeared out of a crowd at an Obama campaign appearance and asked the senator about his economic plan. Joe says his American Dream is being able to provide for his family and send his son to college. But some are saying that Joe isn’t who he appears to be.

Here’s the buzz from the internet:

* Wurzelbacher, who says he was playing football outside with his son when he came upon the crowd gathered around Obama, was planted by the Republican party. This would explain how conservative sites got stories posted about him in advance of the debate and how easily everyone else found him for interviews.

* Wurzelbacher is not a registered voter.

* Wurzelbacher may not be licensed in his home state of Ohio.

* Wurzelbacher may be related to Robert Wurzelbacher of Cincinnati, Ohio, who happens to be Charles Keating’s son-in-law. Keating was implicated in the Keating 5 scandal.

* Wurzelbacher already owns a few companies, which would contradict his claims of being a plumber looking to buy a small business.

(One thing that is on the record: Wurzelbacher compared Obama to Sammy Davis Jr. in an interview with Katie Couric. Ouch.)

So is any of this true? I’m not sure, but some things are suspicious. For instance, how was it that a newspaper was present when Joe was watching the debates (they took the picture above) if Joe didn’t know his name would be mentioned?

I’m sure the National Enquirer is already hot on Wurzelbacher’s trail, so expect to hear more on Joe the Plumber soon. In the meantime, I’d like to get Joe’s number – my bathroom faucet is leaking.

UPDATE: MSNBC has confirmed that Wurzelbacher has no plumbing license.

This entry was posted in RagBlog and tagged Campaign Tactics, Joe the Plumber, McCain. Bookmark the permalink.

2 Responses to Who Needs Watergate? We’ve Got Joe the Plumber!