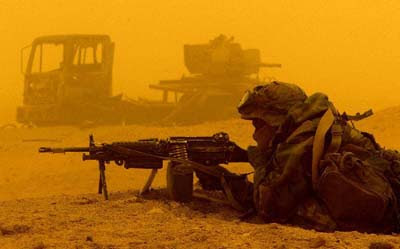 American politicians and journalists have repeatedly made the same mistake in Iraq over the past five years. This is to assume that the US is far more in control of events in the country than has ever truly been the case. This was true after the fall of Saddam Hussein when President Bush and his viceroy in Baghdad Paul Bremer believed that what Iraqis thought and did could safely be ignored. Within months guerrilla war against American forces was raging across central Iraq.

The ability of America to make unilateral decisions in Iraq is diminishing by the month, but the White House was still horrified to hear the Iraqi prime minister Nouri al-Maliki appearing to endorse Barack Obama’s plan for the withdrawal of American combat troops over 16 months. This cut the ground from under the feet of John McCain who has repeatedly declared that ‘victory’ is at last within America’s grasp because of the great achievements of ‘the Surge’, the American reinforcements sent to Iraq in 2007 to regain control of Baghdad.

The success of ‘the Surge’ is becoming almost received wisdom in the US. This is strange since, if the US strategy did win such an important victory, why do America generals need more soldiers, currently 147,000 of them, in Iraq than they did before ‘the Surge’ started? But belief in this so-called victory is in keeping with the American tradition of seeing everything that happens in Iraq as being the result of actions by the US alone. The complex political landscape of Iraq is ignored. US commentators have never quite taken on board that there are not one but three wars being fought out in the country since 2003: the first is the war of resistance against the American occupation by insurgents from the Sunni Arab community. The second is the battle between the Sunni and Shia communities as to who should rule the Iraqi state in succession to Saddam Hussein. The third conflict is a proxy war between the US and Iran to decide who should be the predominant foreign power in Iraq. The real, though exaggerated, fall in violence in Iraq over the last year is a consequence of developments in all three of these wars, but they do not necessarily have much to do with ‘the Surge’.

The reduction in violence is in any case only in comparison to the bloodbath of 2005-7 when Baghdad and central Iraq was ravaged by a sectarian civil war. There were 554 Iraqis killed in the fighting in June 2008, which is only a third of the figure for the same month a year earlier. This is progress, but it still makes Baghdad the most dangerous city in the world. Asked on television about the security situation, Iraqis often respond that ‘things are getting better’ and so they undoubtedly are, but people usually mean that things are better than the terror of two years ago. Foreign television correspondents laud the improved security in the Iraqi capital and are pictured apparently strolling down a peaceful and busy street. What the television viewer does not see are the armed guards standing behind the cameraman, without whom the correspondents would not dare set foot outside their heavily guarded offices.

I do drive around Baghdad without armed guards and have always done so. But I sit in the back of a car with an Arabic newspaper and a jacket or shirt on a hanger masking the window next to me. I have a second car behind me in contact with us by field radios to make sure that we are not being followed. It is true that security is better, but this can be overstated. Each district iin Baghdad is sealed off by concrete walls. There are checkpoints every few hundred yards. Sunni and Shia do not visit each other areas unless they have to. The best barometer for the real state of security in Baghdad is the attitude of Iraqi refugees, particularly the 2.4 million people who fled to Jordan and Syria. Though often living in miserable conditions and with their money running out, the refugees are generally not coming home to Iraq and, when they do, they seldom return to houses from which they have been forced to flee. If they do try to do so the results are often fatal. Baghdad has few mixed areas left and today is 75-80 per cent a Shia city. The demographic balance in the capital has shifted against the Sunni and this is unlikely to change. The battle for Baghdad was won by the Shia and was ending even before ‘the Surge’ began in February 2007.

It was the outcome of the struggle for the capital that caused a large part of the anti-American resistance to make a dramatic change of sides, switching suddenly from fighting to supporting US troops. The attempt by al-Qa’ida in Iraq to take over the whole of the anti-occupation resistance in late 2006 was important in forcing other insurgent groups to ally themselves with the US as al-Sahwa or the Awakening movement. But perhaps a more important reason for the rise of al-Sahwa was that there was no point in the Sunni insurgents attacking the Americans if they were being driven from Iraq by the Shia. There are now some 90,000 former Sunni resistance fighters on the American payroll, but they happily express open hatred and contempt for the Iraqi government. Sectarian divisions in the country remain very deep. In the Fallujah area, for instance, it is very dangerous for either the Sunni chief of police or the al-Sahwa commander (they are brothers) to enter Baghdad. This is because Abu Ghraib at the entrance to the city is controlled by the much-feared and heavily-Shia al-Muthana Brigade, who might kill either of them on sight.

Another reason why violence has fallen in Iraq over the last eighteen months has little to do with ‘the Surge’, but is the consequence of the Shia militiamen of the Mehdi Army being stood down by its leader Muqtada al-Sadr. The one constant theme in his strategy, ever since he fought the US Marines in Najaf in 2004, has been to avoid direct military conflict with the US armed forces or his Shia rivals when backed by US firepower. This was true at the start of ‘the Surge’ in February 2007 and Muqtada has sought truces and ceasefires ever since. He did so after fighting with the Iraqi police in Kerbala in August 2007 and he renewed the truce six months later. In March this year the Iraqi army launched a military offensive to take Basra from the Mehdi Army, an attack which at first failed to make headway until backed by US airpower. But in Basra and later in Sadr City in Baghdad, Muqtada agreed to ceasefires which allowed his former bastions to be taken over by the Iraqi army. Muqtada did not fight because he knew his men must lose at the end of the day. For a military confrontation with the Iraqi army and the US he would need the support of Iran and this was not forthcoming.

McCain and other American politicians who believe that ‘the Surge’ has brought them close to victory, seldom understand the role Iran has played in Iraq in the last two years. Paradoxically, Iran and the US together are the two main supporters of the present Iraqi government. For Iran, Nouri al-Maliki in power in Baghdad leading a coalition of Shia religious parties allied to the Kurds is as good as it is going to get. The Iranians may vie with the US for influence over this government, but both want it to stay in power. “People fail to realise that the success of ‘the Surge’ was the result of a tacit agreement between the US and Iran,” one Iraqi leader told me. “There really is an Iranian-American condominium ruling Iraq these days,” said another.

Suppose McCain is elected US president in November and acts as if the US is the only decision maker in Iraq then he will face a renewed war. Iraqis will not accept the occupation continuing indefinitely and Iran will not allow itself to be marginalized. If McCain were to try to win a military victory in Iraq he could find the supposed achievements of ‘the Surge’ rapidly evaporating.

Patrick Cockburn is the Ihe author of “Muqtada: Muqtada Al-Sadr, the Shia Revival, and the Struggle for Iraq.” A version of this piece appeared in The National, published in Abu Dhabi.

This entry was posted in RagBlog and tagged Iraq Occupation, Iraq War, Journalism, Media, The Surge. Bookmark the permalink.