Why Do We Continue to Tolerate the BushCo Lies? 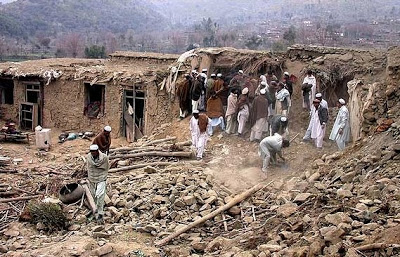 Video Shows US Carnage In Afghanistan
By Tom Coghlan / September 8, 2008

KABUL — As the doctor walks between rows of bodies, people lift funeral shrouds to reveal the faces of children and babies, some with severe head injuries.

Women are heard wailing in the background. “Oh God, this is just a child,” shouts one villager. Another cries: “My mother, my mother.”

The grainy video eight-minute footage, seen exclusively by The Times, is the most compelling evidence to emerge of what may be the biggest loss of civilian life during the Afghanistan war.

These are the images that have forced the Pentagon into a rare U-turn. Until yesterday the US military had insisted that only seven civilians were killed in Nawabad on the night of August 21.

Last night the Pentagon announced that it was reopening the investigation in the light of “emerging evidence” and was sending an officer to Nawabad to review its previous inquiry. Villagers and the UN insist that 92 were killed, including as many as 60 children. Locals say that the US and Afghan troops who came into the village looking for a Taleban commander, with US air support, used excessive force.

In the video scores of bodies are seen laid out in a building that villagers say is used as a mosque; the people were killed apparently during a combined operation by US special forces and Afghan army commandos in western Afghanistan. The film was shot on a mobile phone by an Afghan doctor who arrived the next morning.

Local people say that US forces bombed preparations for a memorial ceremony for a tribal leader. Residential compounds were levelled by US attack helicopters, armed drones and a cannon-armed C130 Spectre gunship.

However, US commanders and Pentagon officials have said repeatedly that seven civilians died alongside 35 Taleban militants during a legitimate combat operation, the target of which was a meeting of Taleban leaders.

The villagers’ accounts have been supported by separate investigations conducted by the UN, by Afghanistan’s leading human rights organisation and by an Afghan government delegation. Two Afghan army officers involved in the operation have been dismissed.

The Pentagon’s original investigation concluded last week that US forces used close air support after coming under heavy fire during a mission to seize a Taleban commander named Mullah Sadiq. They allege that he died in the operation.

The US military said that its findings were corroborated by an independent journalist embedded with the US force. He was named as the Fox News correspondent Oliver North, who came to prominence in the 1980s Iran-Contra affair, when he was an army colonel.

Sources close to one of the investigations said that a video film was shot by Afghan officials the morning after the attack. It corroborates the doctor’s footage but has not been made public.

In a statement released on Saturday, the commander of Nato forces, General David McKiernan, appeared to back away from previous US accounts. He said: “Following the recent operation in Azizabad, Shindand district, we realise there is a large discrepancy between the number of civilian casualties reported by soldiers and local villagers. I remain responsible to continue to try and account for this disparity in numbers, but above all I want to express our heartfelt sorrow to all families that lost loved ones in this firefight.”

A Human Rights Watch report due to be published today is highly critical of US and Nato forces in Afghanistan for the number of civilians killed in airstrikes. It gives warning that repeated instances of Western forces killing Afghan civilians have led to a collapse in popular support for the international presence.

Taking what it says are the most conservative figures available, Human Rights Watch has calculated that civilian deaths as a result of Western airstrikes tripled between 2006 and 2007 to 321. In the first seven months of this year the figure was 119. In the same period, 367 civilian deaths were attributed to Taleban attacks. It accuses US officials of routinely denying reports of civilian deaths.

Maulavi Gul Ahmad, an Afghan MP who was part of a government delegation that investigated the Nawabad attack, told The Times: “We are not only blaming America – this is destroying the reputation of the international community and undermining their presence in Afghanistan.”

Other Afghan investigators alleged that US forces had been duped into attacking the village by tribal figures involved in a local feud.

December 2001
US aircraft attack a convoy taking tribal leaders to the inauguration of new Afghan Government. About 60 killed; US claims al-Qaeda leaders among them

July 2002
46 die, many from same family, when a wedding party in Uruzgan province is bombed in error

October 26, 2006
Between 40 and 85 civilians are killed in airstrikes and mortar bombardments around the settlement of Zangawat in Kandahar province

March 2007
19 people are killed and 50 wounded when US Marine Special Forces fire on civilians after a suicide attack in Shinwar, eastern Afghanistan. The US military apologises and pays compensation to the families

July 6, 2008
47 civilians, including 39 women and children attending a wedding party, are killed by a US airstrike in Nangarhar province, an Afghan government investigating team claims

This entry was posted in RagBlog and tagged Afghanistan, Civilian Fatalities, U.S. Military. Bookmark the permalink.