Why Do We Get It Wrong All the Time Now? 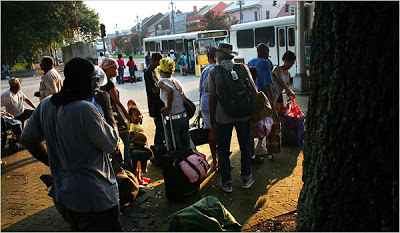 Hurricane Gustav gave the state of Louisiana a test for which it had three years to prepare. There were thousands of poor, sick, disabled and elderly people who could not get out on their own. They needed to be rescued with dispatch, and sheltered in safety and dignity.

One simple test. The state flunked.

Three years to the week after Hurricane Katrina’s landfall, Louisiana executed a fundamentally unfair evacuation plan and did it badly. It relied on dividing the population into separate streams: People with their own cars were directed to shelters run by parishes, churches and the Red Cross. People with medical problems not requiring hospitalization were taken to special shelters. Sex offenders had a shelter to themselves.

All those without a car or a ride were taken on state buses to four state-run warehouses. It was in these shelters, including two abandoned stores, a Wal-Mart and a Sam’s Club, that thousands of working-poor New Orleanians got a sickening reminder of Katrina.

Evacuees said they had had no idea where they were going; bus drivers would not tell them. When they arrived, there were not enough portable toilets, and no showers. For five days there was no way to bathe, except with bottled water in filthy outdoor toilets. Privacy in the vast open space — 1,000 people to a warehouse, shoulder-to-shoulder on cots — was nonexistent. The mood among evacuees was grim, surrounded as they were by police officers and the National Guard, with no visitors or reporters allowed.

“We didn’t want to evacuate into a prison,” Lethia Brooks told the New Orleans Workers’ Center for Racial Justice, an organization that accompanied the evacuees, inspected the shelters and collected hundreds of stories into a report sharply critical of the state’s response.

Gustav ended up being no Katrina, and the week of suffering was not as severe as the deathly mayhem of three years ago. But residents had every right to expect far better treatment than they received. After a week of indignities in crowded, unsanitary shelters, many returned home with their fragile finances in turmoil. They had been forced to buy extra basics while out of their homes, and September rent was due.

The secretary of Louisiana’s Department of Social Services, which was responsible for the shelters, resigned after this scandal and one involving problems with food stamp distribution.

Now, many poor residents are vowing “never again,” as in, “Never again will we get on the bus to be warehoused. We’ll ride out the next storm.” In New Orleans, disaster is never far away, and government incompetence cannot be allowed to undermine a swift, sure evacuation. Gov. Bobby Jindal’s administration should move quickly on a better plan that does not expose the poor to differential, substandard treatment.

This entry was posted in RagBlog and tagged Louisiana, Nature, Poverty. Bookmark the permalink.