Why Is This No Surprise Whatsoever? 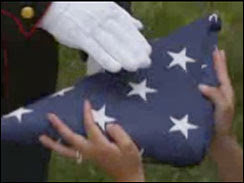 It was a video that was supposed to elicit soaring patriotism and real emotions about the Pledge of Allegiance. But to do that, it used fake soldiers and a staged military funeral instead of the real thing.

On Tuesday night, 15-year-old Victoria Blackstone, a sophomore at the St. Agnes School in St. Paul, led the crowd at the Xcel Energy Center in the Pledge of Allegiance. The audience heard her 434-word essay, “Pledging myself to the Flag of the United States of America,” an essay she’d entered in the “Wave the Stars & Stripes” essay contest and won. The RNC turned that essay into a three and a half minute video, a visually stirring montage rolling over Victoria’s words about sharing the Pledge with Americans who have stood at important moments in history.

There’s the Continental Congress…A real WWII vet…Photos of workers at Ground Zero. A close-up of a folded flag presented to a grieving widow at a military funeral… profiles of soldiers swelling with pride in slo-motion.

But CBS News found that the footage of the ‘funeral’ and soldiers is what is called ‘stock’ footage. The soldiers were actors and the funeral scene was from a one-day film shoot, produced in June. No real soldiers were used during production.

The footage, sold by stock-film house Getty Images was produced by a commercial filmmaker in Chicago. Both Getty and the production company, Mr. Big Films, confirmed that the footage was shot on spec and sold to the Republican National Committee.

One of the actors, Perry Denton of Chicago, Ill. also confirmed that he was hired on a day-rate as an actor for the shoot and told CBS News he was surprised to learn the footage was shown at the convention.

A veteran’s advocate said that with soldiers still deployed and in harm’s way, there is an obligation not to sugar coat reality.

“What it does reveal is a serious lack of understanding and a lack of personal connection to the military,” said Paul Rieckhoff, Executive Director of the Iraq and Afghanistan Veterans of America.

Rieckhoff, who is at the convention with a contingent of veterans added that a video tribute to Medal of Honor winner Michael Monsoor, a Navy Seal killed in Iraq, shown on Tuesday night, used combat video that appeared to him and several other veterans of the Iraq war to have been staged.

After a Web search of videos played at the Democratic National Convention last week, CBS News found no obvious use of stock footage.

The RNC did not respond to CBS News’ request for a comment.

This entry was posted in RagBlog and tagged Republican Convention. Bookmark the permalink.

1 Response to Why Is This No Surprise Whatsoever?