Why McCain Would Be a Mediocre President 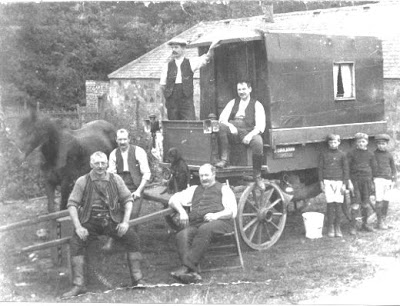 John McCain campaign staff and early model of the “Straight Talk Express.”
‘A careful look at McCain’s biography shows that he isn’t prepared for the job’
By Rex Nutting

WASHINGTON — In his frivolous Paris and Britney ad, Sen. John McCain has asked the right question: Is Barack Obama ready to lead this country?

Since last January, Sen. Obama’s fitness for the presidency has been the only question that matters in American politics. The pollsters and pundits agree that if Obama can show the voters that he’s up to the job, he’ll win. If not, he won’t.

But that begs another question: Is McCain fit to lead America?

That question hasn’t been asked, nor has it been answered.

The assumption seems to be that McCain’s years of experience in the military and in Congress of course give him the background and tools he’d need in the White House.

But is that true? Does McCain have the right stuff?

A careful look at McCain’s biography shows that he isn’t prepared for the job. His resume is much thinner than most people think.

Here are some reasons why McCain would be a mediocre president.

Like the current occupant of the White House, McCain got his first career breaks from the connections and money of his family, not from hard work.

The son and grandson of Navy admirals, he attended Annapolis where he did poorly.

Nevertheless, he was commissioned as a pilot, where he performed poorly, crashing three planes before he failed to evade a North Vietnamese missile that destroyed his plane. McCain spent more than five years in a prison camp.

After his release, McCain knew his weak military record meant he’d never make admiral, so he turned his sights to a career in politics. With the help of his new wife’s wealth, his new father-in-law’s business connections and some powerful friends had made as a lobbyist for the Navy, he was elected in 1982 to a Congress in a district that he didn’t reside in until the day the seat opened up. A few years later, he succeeded Barry Goldwater as a senator.

McCain hasn’t accomplished much in the Senate. Even his own campaign doesn’t trumpet his successes, probably because the few victories he’s had still rankle Republicans.

His campaign finance law failed to significantly reduce the role of money in politics. He failed to get a big tobacco bill through the Senate. He’s failed to change the way Congress spends money; his bill to give the president a line-item veto was declared unconstitutional, and the system of pork and earmarks continues unabated. He failed to reform the immigration system.

Every senator who runs for president misses votes back in Washington, so it’s no surprise that McCain and all the others who ran in the primaries have missed a lot of votes in the past year. But between the beginning of 2005 and mid-2007, no senator missed more roll-call votes than McCain did, except Tim Johnson, who was recovering from a near-fatal brain aneurysm.

McCain has done one thing well — self promotion. Instead of working on legislation or boning up on the issues, he’s been on “The Daily Show with Jon Stewart” more than any other guest. He’s been on the Sunday talk shows more than any other guest in the past 10 years. He’s hosted “Saturday Night Live” and even announced his candidacy in 2007 on “The Late Show with David Letterman.”

McCain has not articulated any lofty goals. So far, his campaign theme has mostly been “McCain: He’s None of the Above.”

McCain has frequently taken on near-impossible missions that go against the grain of his party. It’s the basis of his reputation as a maverick. But McCain has never been able to bring more than a handful of Republicans along with him on issues such as campaign finance reform or immigration. Democrats on the Hill have accepted McCain’s help on some issues, but except for a few exceptions (John Kerry and Joe Lieberman), they’ve never warmed to him.

To achieve anything as president, McCain would have to win over two hostile parties: The Democrats and the Republicans.

Living in the Sixties

McCain is still fighting the Vietnam War. But he’s not fighting the real historic war, which taught us the folly of injecting ourselves into a civil war that was none of our business. We learned that, in a world where even peasants have guns, explosives and radios, a determined and popular guerrilla force can defeat a modern army equipped with the mightiest technology if that army has no vital national interest to protect.

Most of the other high-profile politicians who fought in Vietnam — Colin Powell, Chuck Hegel, John Kerry, and Jim Webb — aren’t stuck in the past, and they don’t view the Iraq War as a chance to get Vietnam right.

After years of honing a reputation as a guy who’ll say the truth regardless of the political consequences, McCain has crashed the Straight Talk Express. On almost every issue where he took a principled stand against the Republican line — taxes, immigration, oil drilling, the Religious Right — he’s changed his views.

Successful presidents come from two molds: visionaries, or mechanics. The visionaries — think Reagan or FDR — see what others can’t and say ‘Why not?” to inspire the country. The mechanics — think LBJ or Eisenhower — know the ins and outs of government and are able to harness the power of millions of humans to accomplish great things, or at least keep the wheels from coming off.

McCain fits neither style. He’s neither a dreamer, nor a detail guy. His major accomplishment, in Vietnam and in the Senate, has been merely to survive.

Just surviving doesn’t make you’re a hero, or a decent president. America needs to do more than survive the next four years.

Thanks to Ruth Roberts / The Rag Blog

2 Responses to Why McCain Would Be a Mediocre President