Why Not "Give Aid Rather Than Harassment"? 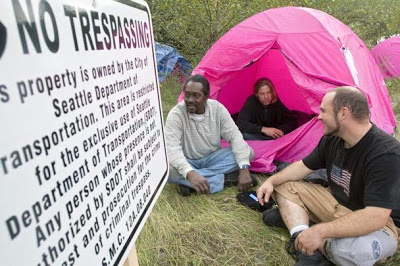 Nickelsville residents George Williamson, left, John Clark and Aaron Colyer socialize in a tent next to a new no-trespassing sign that was staked into the ground several hours earlier by the Seattle Department of Transportation. Photo: Chris Joseph Taylor/Seattle Times
A Pink Housing ‘Bubble’ I Could Get Into
By Diane Stirling-Stevens / September 26, 2008

This article reminded me of something that I organized in 1993 down in Dana Point, California. I was helping the homeless by bringing them used clothing (and discarded clothing I found in dumpsters throughout the area). I would take the discarded clothing to my condo’; wash it, put it into my motor-home, and take it to Delaney Beach where there were about 20 to 30 homeless people who milled around on a regular basis.

I would open up the motor-home; told all of them to go in (just like a mobile clothing shop), and pick out clothing that fit them. It was wonderful to get actively involved one-on-one with each and every individual. I would listen to their stories about how they became homeless; we would build bon-fires on the beach, make coffee, and sit around sharing the conditions by which they no longer had a roof over their head.

Not one of the people I listened to were in any way ‘professional vagrants’ – they’d all been employed fallen on hard times, and were in limbo and anxious to find jobs.

I decided to bring my typewriter to the beach; used the generator to power up both my computer and my electric typewriter, and started re-writing their resumes so they could start job-hunting.

I also had (in storage) two grand pianos; stored after I’d lost my home because of a contractor who owed me $128,000 but couldn’t pay it because he’d recently filed bankruptcy. I decided to sell one of the grand pianos for $8,000, and used that money to help the homeless find a place to sleep and shower each night. I rented just one hotel room near the beach – it was $120/night. I negotiated a monthly rate for $2900, and during that month each and every person was able to shower; use their food stamps to get food which all of them shared, and I kept them in clean clothing by going to my home to do the laundry. They took their resumes; climbed on busses, and searched for jobs. The agreement was that all of them would put back 10% of anything they might earn for the next 3 months, into a common fund to buy another night at the hotel and keep providing for the rest of those who were not successful.

It was one of the most exciting times in my life as I saw how powerful the commitment was to have everyone succeed; it became a strong family, and one by one individuals were finding work and putting back into the ‘fund’ we’d developed. Because I couldn’t afford to put more than the $8,000 into the program, I knew at some point in time the money would be depleted but hoped everyone would be on their feet by the time I ran out of funds.

All but 3 were either employed full-time or part-time when my funds ran dry. Still, those 3 were sheltered by the rest of the group as each found housing, and opened up their doors to those 3 who had yet to find jobs or a place to live. I remained involved by doing the laundry; finding more clothes in the dumpsters, and by the time I relocated to another part of the state, no one was in dire need.

When I read through this article, I noticed how colorful the tents are and feel it could be an invitation to the rest of the community to get involved in a similar way. Rather than removing these people; threatening these people, I see these pink ‘bubbles’ as a signal for the city to start appropriate food and clothing drives to give aid rather than harassment.

I used to live in the Seattle area, and I so wish I did now because I’d be down there trying to lend a hand and ideas to these people. Potentially you, and any readers of your blog, might see what they might do to make suggestions similar to what I did in California 15 years ago – I saw it work with great success, and believe there should even be a campaign (no pun intended) to get Bill Gates and Microsoft involved. There should be a campaign to end the ‘pain’ of this camp; pink tents are signaling a need that can be answered without burdening any one individual or entity severely.

The 5 p.m. deadline came and went on Thursday, and no city workers or cops arrived to sweep away Nickelsville, its 150 illegal fuchsia tents and its 100 or so residents.

Most everyone at the encampment expected that sometime this morning, the city would evict the encampment’s residents and arrest those who won’t leave voluntarily.

Earlier Thursday afternoon, workers with the Seattle Department of Transportation posted 2-by-1-½ foot “NO TRESPASSING” signs that promised those in violation could be charged with criminal trespass. The bulk of the land where the encampment is situated is owned by the SDOT.

As the workers put the signs in the ground, a couple of Seattle police offers stood by and watched. There were no confrontations.

The 150 tents were set up by the homeless and volunteers in the predawn hours Monday.

On Thursday evening, about 200 of the homeless and volunteers milled around. Some, like volunteer Joe Taylor, 23, who’s just starting on his master’s degree in engineering at the University of Washington, became de facto foremen. Taylor led a group of men putting together a small camp-administrative office using two-by-fours and wood from pallets.

He said he knew the structure might only last a day.

“I kind of designed it to be taken down,” said Taylor.

Some of the volunteers, such as Lindsay Andersen, 25, a program assistant at the Alzheimer’s Association in Seattle, had to learn on the job how to use a hammer or a pry bar to pull apart a pallet.

If the cops arrived, she said, “I’m bailing.” Jail time doesn’t look that good on a résumé, she said.

There was an air of resignation at the camp about what will happen next.

Aaron Colyer, 28, was using donated pink paint to put color on a large wood structure now surrounding his tent and propping it off the ground.

He and volunteers had nailed it together on Thursday. He was listening to a Christian radio station as he painted.

Colyer said that when the city arrives to evict, “I’ll just sit on my porch, listening to the radio. If they want to take me to jail, let them take me to jail.”

This entry was posted in RagBlog and tagged Economy, Homeless, Police Harassment. Bookmark the permalink.

2 Responses to Why Not "Give Aid Rather Than Harassment"?