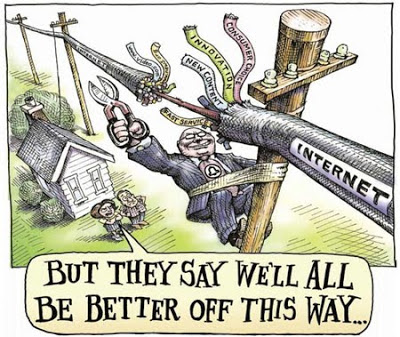 Cartoon from Schrier Blog.
Is FCC dropping the ball?
The fight for a free internet

A strong right punch from the DC Appeals Court in April stunned the FCC, leaving it dazed and staggering. The champion of the people’s Internet entered the ring with a good fight plan and a righteous score to settle with the opponent.

But, in a strong defense by a heavy-muscled corporation, the court delivered a near knockout punch to the open Internet defender. Blocking the FCC’s regulatory blow to Comcast, the court held the FCC had no authority to regulate Comcast’s Internet bandwidth management policies.

The fight started brewing in 2007 when the Associated Press (AP) discovered that Comcast was blocking transmission of BitTorrent Peer-to-Peer file exchanges without notifying customers. A complaint was filed with the FCC by Internet and legal advocates and the FCC held public hearings on the issue. But at the first bell Comcast was caught wearing brass knuckles under the gloves.

Then FCC Chair Kevin Martin called for public comments. The first hearing was at Harvard and was packed with shills, hired by Comcast, who filled the available seats. Advocates of an open Internet could not be seated and the campus police blocked their entry. Public outcry and overwhelming evidence moved the FCC to sanction the media giant anyway. That’s when the battle got bloody.

Comcast punched back with a suit in federal court that demanded a stay of the FCC sanction. The court held in early April that a change during the Bush administration shifting the authority in such matters from Title II to Title I of the Communications Act resulting in the commission being powerless in the matter.

That left the current FCC Chair Julius Genachowski with only one backup punch — to switch the authority back to Title II of the Communications Act and reassert control over Internet services. But so far the Commission seems dazed and unable to react.

In August, while the Commission was still seeing stars, Google and Verizon proposed a “compromise” that called for unhindered Internet access for wired customers while leaving the door wide open for wireless providers to decide whatever they like, regardless of customer demands. They insist that their ambitious plans to enter the wireless business had nothing to do with their suggestion.

Another blow to Net Neutrality came in September when Sen. Henry Waxman, Chairman of the House Energy and Commerce Committee, announced he was dropping the push for a Net Neutrality bill in Congress. This came after the Open Internet Coalition pulled it’s support and it seemed unlikely the bill would receive Republican support.

Calls for Chairman Genachowski to act on the promises made by President Obama to vigorously fight for a free and open Internet have gone unheeded. It’s looking more like a free-for-all — a fight where the referees seem to be bought and the champ’s taking a fall.

Unless the FCC gets off the mat, the next round will be when Congress reconvenes after the elections. By then the ringside tickets will be sold out, the fix will be in, and the citizens — the real owners — will get the cheap seats where they can’t be heard. But, hey, maybe it’ll all be on television, if you paid your cable bill.

[William Michael Hanks lived at the infamous Austin Ghetto and worked with the original Rag gang in the Sixties. He has written, produced, and directed film and television productions for the National Aeronautics and Space Administration, The U. S. Information Agency, and for Public Broadcasting. His documentary film The Apollo File won a Gold Medal at the Festival of the Americas. Mike lives in Nacagdoches, Texas.] 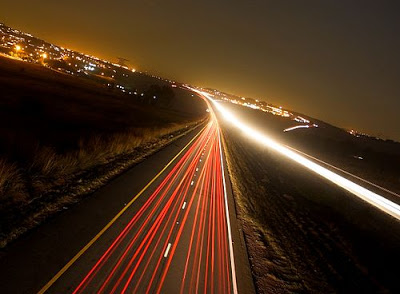 In response to the public outcry and a mountain of evidence, FCC Chair Kevin Martin sanctioned Comcast for violating Net Neutrality. The complaint was brought to the agency after a coalition of Net users and activists caught the cable giant red-handed, jamming use of popular file-sharing applications. Martin ruled that Comcast had “arbitrarily” blocked Internet access and failed to disclose to consumers what it was doing. But the ink was barely dry on the FCC order before Comcast filed an appeal in federal court, challenging not only the FCC’s ruling but the agency’s entire authority to protect Web users.

The fight for Net Neutrality gained ground when Julius Genachowski, the newly appointed FCC chair, announced plans to expand existing agency rules to protect the free and open Internet. Genachowski said the FCC must be a “smart cop on the beat,” preserving Net Neutrality against increased efforts by providers to block services and applications over both wired and wireless connections. The chairman cited a number of examples where network providers had acted as gatekeepers and concluded, “If we wait too long to preserve a free and open Internet, it will be too late.

In early April, the U.S. Court of Appeals for the D.C. Circuit ruled that the FCC lacks the authority (under the jurisdiction it claimed) to protect Internet users against network operators. The case was brought by cable giant Comcast after it was sanctioned by the FCC for blocking Net users’ access to file-sharing applications. The ruling effectively gave corporate gatekeepers control over Internet users’ online experience, and it called into question the FCC’s ability to act as a public interest watchdog over our country’s communications media.

We now wait to see whether the FCC will reclassify the Internet Service Providers from Title I to Title II and thereby reassert jurisdiction or whether Congress will act with legislation to preserve Internet Neutrality. Nothing is likely to happen before the mid-term elections. The outcome of those elections will undoubtedly affect the vitality of efforts to save the Internet from corporate piracy.