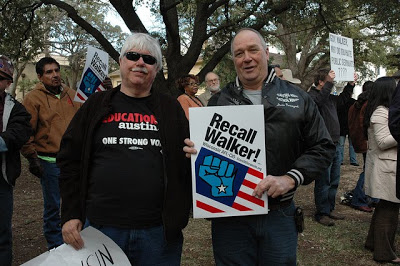 AUSTIN — They carried “Recall Walker” signs, but they weren’t in Wisconsin. They were standing across the street from the Hilton Hotel in downtown Austin, Texas, where Wisconsin Gov. Scott Walker had come to address a gathering of conservative Texas lawmakers hosted by the Texas Public Policy Foundation on Thursday, January 12.

They were numerous — as many as 150 — and they were loud. They chanted “Recall Walker” and “Do you like the unions? YES! Do you like Scott Walker? NO!”

Moeller went on to say that what happened last year in Wisconsin when Gov. Walker led the charge to roll back collective bargaining rights for public sector workers is happening all across the US. Right-wing billionaires like the Koch brothers and the organizations that they support like the Texas Public Policy Foundation (TPPF) and the American Legislative Exchange Council (ALEC) are working in unison with politicians like Gov. Walker to take back gains won by unions that have made possible a decent middle-class life for millions of workers in both the public and private sector.

It happened in Ohio where last year lawmakers passed at the governor’s request a law restricting collective bargaining for public workers. (The law was subsequently overturned in November by a popular vote in a referendum.) It’s happening now in Indiana where the governor and lawmakers are trying to make Indiana a right-to-work-for-less state.

They’re inside planning how to make it happen in Texas next year when the Legislature meets. That’s why, today, We are Wisconsin, Moeller said.

The reality is that for the last 30 years, the rich have been waging class war on working people, said Snehal Shengavi, a member of the Texas State Employees Union CWA Local 6186 and the labor magnet for Occupy Austin. They have eroded our standard of living, frozen and cut our wages, taken away our jobs, cut our health care benefits, and made our retirement less secure.

“The rich have gotten richer while the rest of us suffer,” Shengavi said. “It’s time to put them on notice that we know what class warfare is, and we’re going to take it to them. We’re putting class warfare on the agenda, and it’s going to be on our own terms. Occupy everything!”

While demonstrators on the outside expressed their ire, TPPF welcomed Texas lawmakers and Gov. Walker to a luncheon at its annual forum where they discussed TPPF’s legislative agenda for the session that begins next year. Foremost on the agenda is a proposal to eliminate public pensions in Texas.

Last summer a group of Houston millionaires led by hedge fund operator Bill King announced that they were kicking off a campaign to eliminate public pensions for Texas’ teachers, public safety employees, and other local and state government workers.

In October, TPPF announced a plan for implementing King’s proposal. The plan would require legislative action, but if it passed, newly hired public employees would be diverted away from the state’s two public pension funds the Employee Retirement System for state employees and the Teacher Retirement System for teachers and into 401(k) type savings plans.

Local government new hires would also be diverted from their traditional pension plans. People already working in the public sector would have their pensions frozen. With the severe cut in state contributions envisioned in this plan, it would be difficult to maintain benefits for retirees at their current levels.

In the past, TPPF has supported legislation to privatize public services and give tax breaks to corporations. It also supports maintaining Texas’ right-to-work for less laws.

As demonstrators chanted “We are the 99 percent,” a group of construction workers wearing their hardhats walked across the park next to the sidewalk where demonstrators gathered, stopped at the back edge of the demonstration, unfurled their banner that read Iron Workers Local 462, and began chanting. 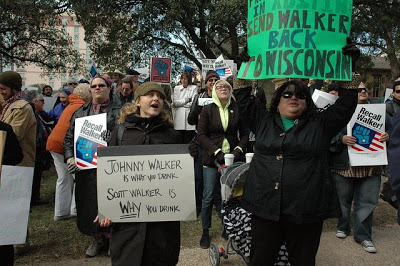 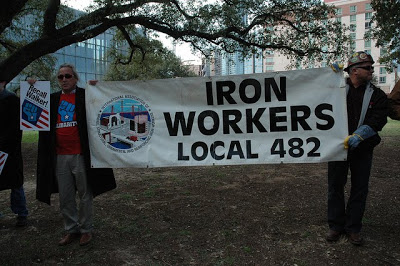 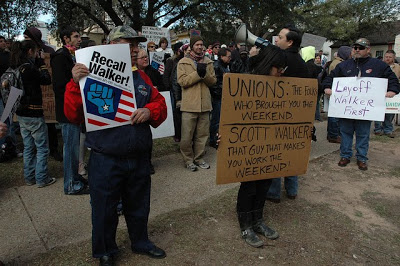 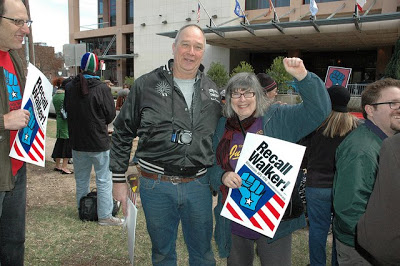