One reason workers aren’t making a living wage at UT is that there has not been an across-the-board cost of living pay increase in more than 10 years. 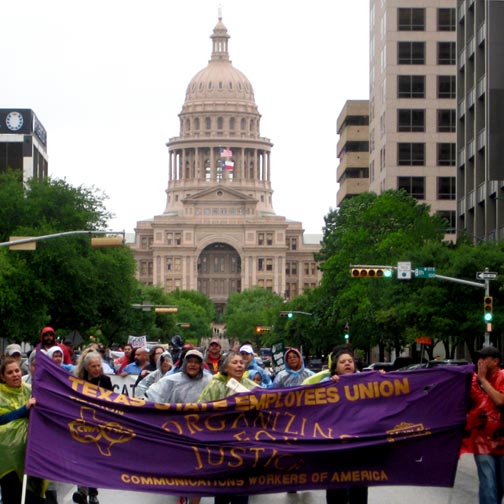 On opening day of the 84th biennial session of the Texas Legislature, about 50 members of the Texas State Employees Union (TSEU) stood together in front of the Capitol grounds to deliver a message to lawmakers: stop privatizing state services, give all state employees a fair pay raise, and fully fund the state employee pension fund.

Some union members also carried signs demanding that the University of Texas at Austin raise its minimum wage to $15 an hour.

TSEU is part of the UT Save Our Community Coalition, a student and community coalition that is bringing the Fight for $15 to the UT campus, located a few blocks north of the Capitol.

While much of the focus of the Fight for $15 has been on raising wages in retail and the fast food industries, many workers at UT Austin and other state universities make less than $15 an hour.

These low-wage workers provide vital services that make education possible, and many of the jobs they perform are not the kind of jobs we think of as low-wage work.

“An administrative assistant in my department makes $20,019 a year,” said Anne Lewis, a lecturer in the UT-Austin Radio, Film, and Television Department and a member of TSEU’s executive board (and a contributor to The Rag Blog). “These kinds of jobs are prevalent throughout UT, and most of them pay in the low 20K range.”

“A friend of mine who was laid off after working as an oral history transcriber at UT for 30 years was making about $27,000 a year when she was laid off,” said Lewis.

Some administrative jobs at UT are filled by temporary workers hired through UT’s temporary staffing agency UTemps. Many of them make $11 to $12 an hour.

And there are many other low-paying jobs on campus.

The starting pay for the workers who clean UT’s building after students, faculty, and other staff members go home at night is $1,907 a month, or about $11 an hour, and starting pay for food preparation workers at UT’s dining halls is about $11.50 an hour.

Pay for graduate students who teach many of UT’s undergraduate courses starts
at $11.27 an hour.

Pay for graduate students who teach many of UT’s undergraduate courses starts at $11.27 an hour.

According to an MIT living wage calculator, a living wage in Austin for a worker with one child is more than $19 an hour.

One reason that so many workers aren’t making a living wage at UT is that there has not been an across-the-board cost of living pay increase in more than 10 years.

“Departments can give cost of living raises, but because of expensive salaries that UT is paying for newly hired executives and huge raises of high level administrators, the departments are being starved and can’t give sufficient across the board raises to keep up even if they wanted to,” said Lewis.

Since then, tuition and fees at state universities have nearly doubled and student debt in Texas has increased 61 percent.

According to UT administrators, the lack of state funding has caused a budget crisis at UT that requires higher tuition and low wages.

The austerity measures imposed on UT’s student and workers do not extend to executives who manage the campus.

But the austerity measures imposed on UT’s student and workers do not extend to executives who manage the campus.

“Last summer, UT advertised a position in Shared Services with a starting pay of $14,500 a month,” said Lewis.

It consolidates and centralizes services, relies on call centers rather than face-to-face contact for services, and has caused job losses at UT.

It is currently being piloted in a few departments.

Despite the highly paid executives supervising Shared Services, the results have not been good.

In November, the College of Education, one of the departments where Shared Services is being piloted, asked to be let out of the experiment because Shared Services’ service level was so bad.

‘The University of Texas at Austin has one of the highest rates of executive pay in the nation.’

The Austin Business Journal reports that, “The University of Texas at Austin has one of the highest rates of executive pay in the nation.”

According to a report published by the Institute for Policy Studies, the average pay for UT’s top executives in 2012 was $716,644 (in 2006 dollars), and UT ranked tenth in executive pay among U.S. public universities.

Members of the Fight for $15 campaign have been calling attention to the fact that UT workers and students have been the ones making sacrifices while top UT administrators have been enriching themselves.

Right now, Fight for $15 supporters are circulating a petition that they are asking members of the UT community to sign.

On January 27 at 6:00 P.M., they’ll be screening a documentary entitled Shadows of Liberty about the corporate takeover of the media. The screening takes place at the Belo Center for New Media at UT.

In February, they’ll be hosting a forum where the featured speaker will be James Galbraith, the Lloyd M. Bentsen Jr. Chair in Government/Business Relations and Professor of Government at UT.

In March, UT TSEU members will be holding a mini-lobby day where they will make a case to lawmakers for including UT workers in state employee pay raises and increasing the minimum wage at UT to $15 an hour.