Though I am hesitant to forward such horrific racist imagery, I also believe it absolutely necessary for our readers to know that this kind of right wing white supremacist activity is flourishing, even among conservaties who retain a modicum of respectability. It is a frightening and dangerous trend and one to which we must pay attention.

Please let us know if you think the value of alerting the public to this kind of activity outweighs any harm that might be caused by its further circulation. 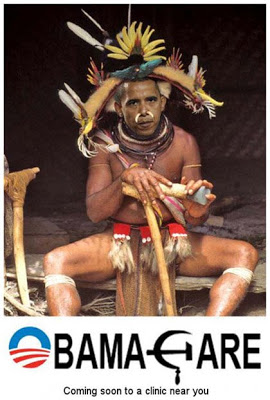 This racist image has been distributed by conservative activist Dr. David McKalip.

On Sunday night, Dr. David McKalip forwarded to fellow members of a Google listserv affiliated with the Tea Party movement the image [at top]. Above it, he wrote: ‘Funny stuff.’

The election of our first black president has brought with it a strange proliferation of online racism among conservatives.

And we’ve got the latest example.

On Sunday night, Dr. David McKalip forwarded to fellow members of a Google listserv affiliated with the Tea Party movement the image [above]. Above it, he wrote: “Funny stuff.”

Now, Tea Party activists trafficking in racist imagery are pretty much dog bites man. But McKalip isn’t just some random winger. He’s a Florida neurosurgeon, who serves as a member of the American Medical Association’s House of Delegates.

He’s also an energetic conservative opponent of health-care reform. McKalip founded the anti-reform group Doctors For Patient Freedom, as well as what seems to be a now defunct group called Cut Taxes Now. Last month he joined GOP congressmen Tom Price and Phil Gingrey, among others, for a virtual town hall to warn about the coming “government takeover of medicine.” And in a recent anti-reform op-ed published in the St. Petersburg Times, McKalip wrote that “Congress wants to create larger, government-funded programs for health care and more bureaucracy that ration care and impose cookbook medicine.”

Asked about the email in a brief phone interview with TPMmuckraker, McKalip said he believes that by depicting the president as an African witch doctor, the artist who created the image “was expressing concerns that the health-care proposals [made by President Obama] would make the quality of medical care worse in our country.” McKalip said he didn’t know who created it.

But pressed on what was funny about an image that plays on racist stereotypes about Africans, McKalip declined to say, instead offering to talk about why he opposes Obama’s health-care proposals.

“I have a busy day,” he said eventually, before ending the call.