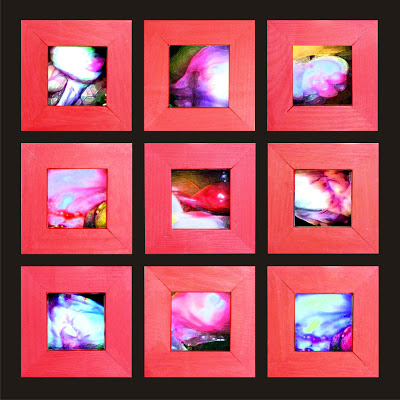 “Beautiful Inside” by Angela Elkins. The digitally-enhanced images were taken from a video of a laparoscopy, recorded during exploratory surgery performed on the artist. Angela, who was hysterectomized at the age of 24, says of the photoshopped images, “Everyone seems to be repulsed by the sight of our insides, our blood, what fills our skin. So I took these images and made them beautiful.” The images include views of her ovaries and uterus prior to the hysterectomy.

This work is part of an exhibit of Elkins’ works entitled U-tear-us Out, at Watkins College of Art and Design in Nashville. The exhibit addresses the issue of women and hysterectomies through sculpture and digital images. The works can be seen here, on the HERS Foundation website.

Hysterectomies and women’s health:
Heard about the H-word recently?

If you haven’t heard about the H-word recently, you soon will.

I’m talking about hysterectomy and female castration (removal of the ovaries) which takes place in 73 percent of all hysterectomies.

I might have been one of the thousands of women given a needless hysterectomy each year had I not received counseling 10 years ago from the HERS Foundation, the only independent, international organization dedicated to the issue of hysterectomy.

After all, eight Houston gynecologists had tried to convince me that because my fibroids were so large I would need a hysterectomy. Yet, I was not bleeding excessively and felt just fine. I just could not understand why I needed to go to the hospital for major surgery.

Not one of the doctors I visited for second, third, fourth… opinions had told me I had any other alternative. Fortunately, the internet led me to the HERS Foundation, to its incredible resources and its wonderful leader Nora Coffey who personally counseled me.

She later referred me to a compassionate board certified OB-GYN who read my images and pretty much told me that if I got off HRT and gave it some time, my fibroids might shrink all by themselves. I thought I’d give that a try and a decade later, am happy to report I’m doing fine.

On Saturday, April 23, Congresswoman Carolyn B. Maloney (D-NY) will deliver the keynote address at the HERS Foundation’s 28th Hysterectomy Conference in New York.

Maloney’s book Rumors of Our Progress Have Been Greatly Exaggerated, details the ongoing struggle women encounter on a number of fronts, including equal pay, politics, and health care.

Maloney is one of several prominent speakers who will discuss the impact of hysterectomies on women’s lives. Others will focus on alternatives to hysterectomy for common symptoms and conditions, including ovarian cysts, fibroids, endometriosis, hyperplasia, prolapse, HPV, pelvic pain, and obstetric hemorrhage. Another speaker will talk about legislation regarding informed consent. And, still others will address legal issues including establishing damages and medical malpractice.

I encourage men and women to become better acquainted with the advocacy work of the HERS Foundation and if possible to attend their conference. At the very least, you must read their FACT sheet which will blow you away with the devastating consequences of hysterectomies.

And, if you are someone who has been told you need one, you will be happy to learn that 98 percent of women HERS has referred to board-certified gynecologists after being told they needed hysterectomies, have discovered that, in fact, they did not need one. Time well spent.

2 Responses to Women’s Health : Heard About the H-Word Lately?