World Hunger: Such a Goddamned Nuisance

The 25th annual World Food Day, marked on 16 October, was an occasion whose arrival and passing received little media attention or governmental fanfare. Evidently, much of the world media and governments are consumed with an economic crisis of epic proportions, which is perceived in the US as the worst such upheaval since the Great Depression. In the rest of the world, it’s depicted as the worst economic crisis in recent memory or, as the BBC termed it, “the most tumultuous times on record in the global financial markets.”

There is hardly any disagreement that Wall Street’s woes are manmade. Regardless of what terminology one wishes to apply (miscalculations, greed, or wholesale failure in the US capitalist system, rooted in the economic philosophies of Milton Friedman and his ultra laissez- faire approach), the fact is the US economic crisis is not a fleeting phenomenon and no quick fixes can provide a magic remedy.

In an interview with Fox Business Network, US Treasury Secretary Henry Paulson expressed regret, unusual to any top US official, for the economic “mistakes” made and which are promising a global recession for years to come. “We’re not proud of all the mistakes that were made by many different people, different parties, failures of our regulatory system, failures of market discipline that got us here.” However, he promised that the US “will mitigate the impact on the real economy and we’ll get this financial system working again.”

There is no reason to doubt Paulson’s commitment to the financial system. In fact, when it’s the rich and powerful whose wealth and influence are at stake, the US government, if not most world governments, hold true to their word. While the IMF had repudiated governments in Asia, Africa and South America for many years for any slight intervention in their country’s economies (for a “free market economy” has to be entirely unregulated in order for natural checks and balances to resolve whatever crisis is at hand, they were told), the Bush administration and leading Western powers moved with no hesitation to nationalise some of the largest institutions in their own markets. Like China’s brand of capitalism that operates under communist symbols, the US, the UK and others are becoming increasingly socialist under the banner of capitalism. Of course, it’s not socialism for the downtrodden, but corporate welfare in its most stark manifestations.

Consider the size of the entire US GDP for 2007 — $13,800 billion — to appreciate the awesomeness of the US rescue package of $700 billion. Still, in the UK the percentage is much higher as the country’s GDP for 2007 was estimated at $2,457 billion while the government’s rescue package is $680 billion. A more astonishing number: the rescue package for the entire Eurozone estimated at $1,370 billion. Conventional wisdom, as parroted by almost every financial expert on most media outlets, states that such lofty numbers are simply a reflection of the scale of the crisis at hand. In fact, some argue that the Bush administration’s greatest fault is intervening too little too late, by failing to nationalise Lehman Bros as it did Fannie Mae and Freddie Mac.

It’s rather ironic that those who cried foul every time a Third World government dared intervene in their national economy — even if to guarantee the welfare of the poorest segments of society — said nothing as the US, the UK and others defied every rule of the free market economy long championed by neoliberal economists. Even leading US Republicans who chastised “Big Government” at every turn (especially to block welfare programmes that mostly benefit the poor) cheered the government on as it moved to bail out the rich who, as usual, are likely to remain unaccountable for risking the retirement funds and life savings of millions of Americans.

A dominant argument to justify government behaviour is, yet again, the trickle down effect: a term coined by a Ronald Reagan speechwriter that simply means that what is good for the rich is, eventually, good for the poor. While elites in every society eagerly infuse such “Reaganomics” at every turn, the world’s poor is yet to feel the trickles, which poses an interesting question: Why the unprecedented and historic urgency to bailout the rich (for the sake of the poor, at an imaginary point in the future), while the poor can easily be saved without such roundabouts plans? 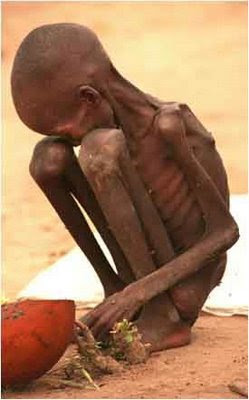 The fact is that neither America’s poor nor Africa’s poor are on the minds of European leaders, nor the Bush administration, as their high officials continue to hold anxious meetings and offer the most generous rescue packages. If indeed it’s the plight of humanity that is worrying these governments, then maybe they should consider the following, according to Oxfam, UK: “The number of hungry people now stands at 967 million. And around 24,000 people die daily of hunger-related causes. Around 2.7 billion people live on less than £1 a day; up to 80 per cent of this income goes on food.” Care International’s calculations are equally bleak, with 220 million people of the number above on the brink of starvation.

According to Oxfam, the main reasons for world poverty are also manmade: “biofuel policies, high fuel prices, growing global demand, unfair world trade rules, and climate change.” Long before the Wall Street financial crisis, there existed a much more dangerous crisis, the world food crisis, dubbed a “perfect storm”. The latter is much more consequential for it affected the very lives, not simply the standard of living, of many millions around the world.

Barbara Stocking wrote in the New Statesman, “According to the latest figures, the food crisis has resulted in an extra 119 million malnourished people, bringing the total to almost one billion — nearly one in seven people now goes hungry. This is hunger on so vast a scale that it is difficult to understand how the world arrived at this point.”

It’s very telling that trillions have already been spent to patch up leading world financial institutions, while out of the comparatively small sum of $12.3 billion pledged in Rome earlier this year, to offset the food crisis, only $1 billion has been delivered. The hope that at least extreme poverty can be eradicated by the end of 2015, as stipulated in the UN’s Millennium Development Goals, seems as unrealistic as ever, not due to lack of resources but a lack of true concern for the world’s poor.

Whether the American, European or any other government infused bailout packages rectify the financial crisis or not, chances are that 16 October 2009 will bring similarly devastating news about the plight of the world’s poor and which is likely to remain that: mere “news” that requires little action, if any at all.

Ramzy Baroud (www.ramzybaroud.net) is an author and editor of PalestineChronicle.com. His work has been published in many newspapers and journals worldwide. His latest book is The Second Palestinian Intifada: A Chronicle of a People’s Struggle (Pluto Press, London).

This entry was posted in RagBlog and tagged Hunger, Poverty, United Nations. Bookmark the permalink.