Would John McCain Re-establish the Draft? 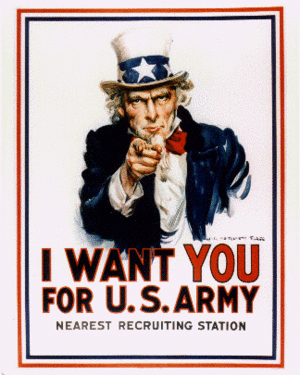 There has been almost no discussion in the press about the broader implications of John McCain’s military policies.

McCain wants to keep a large military contingent in Iraq for some years to come.

He agrees that more US troops should be sent to Afghanistan. (Obama wants more troops for Afghanistan but will draw down the ones in Iraq so that is a wash).

McCain has joked about bombing Iran, accuses Iran of sending insurgents into Iraq, and pledges to stop Iran’s nuclear research program. McCain has said, “There is only one thing worse than a military solution, and that, my friends, is a nuclear-armed Iran.”

McCain has all but pledged a war on Iran. (In contrast, Obama says he will conduct direct tough diplomacy with Tehran).

McCain is also a hawk on Georgia in the Caucasus and if he is to remain credible he’d have to increase US troop presence in the Greater Middle East.

Although US military re-enlistments in the ten combat divisions have not fallen in the way some observers had feared, that statistic only speaks to the ability of the US military to maintain the status quo. Even that ability is in long-term question, as African-American enlistments, traditionally a significant proportion, slip.

But McCain is not about the military status quo. He is ambitious for further conflicts. The current US military is too small to handle yet another front, and to maintain, as McCain insists they must, the current ones.

My friends, there is only one way for McCain to make good on his hawkish foreign policy and his virtual pledge of more wars.

McCain will need to institute a draft for young American men (and, given the times, maybe for women as well).

McCain has been frank about this issue (see youtube):

The argument that Congress would have to approve the draft does not reckon with the executive’s power in modern practice to begin military conflicts that then dragoon the legislature into funding and supporting them (look at the Pelosi Congress, which wanted out of Iraq as of Jan. 2007 but was blocked by the Republican plurality in the Senate). Bush discussed with Blair getting up a phony provocation that looked like it was coming from Iraq, as a way of getting into a war. The executive, with its legion of black ops units, can always get up a Gulf of Tonkin incident and stampede the the legislature into emergency measures. It could even start with a “temporary” draft, analogous to the “temporary” Bush tax cuts for the billionaires, which McCain now insists must be permanent.

As for the argument that the USG can’t afford a draft, uh, I’ve got news for the civilians who say this. They don’t pay draftees anything to speak of, and they have plenty of cots and plenty of barracks and old blankets. If it happens, you’ll see what a good deal it is for the USG, especially compared to the $200,000 a year they pay the mercs.

If you are in your late teens and early twenties, or if you are a parent of a person that age, and you have strong views on a renewed draft, it should come into your decision about whether to vote on Tuesday and for whom.

1 Response to Would John McCain Re-establish the Draft?