Wright at the Press Club : A Set Up? 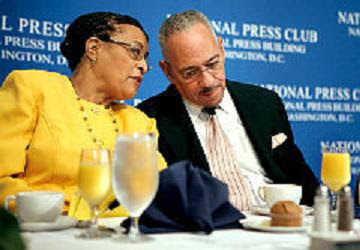 The Rev. Dr. Barbara Reynolds and the Rev. Jeremiah Wright at the National Press Club event Monday, which was organized by Reynolds.Photo by Somodevilla/Getty.
Is Jeremiah Wright a colossal disaster for Barack Obama or a press trick?
By Errol Lewis / April 30, 2008

The Rev. Jeremiah Wright couldn’t have done more damage to Barack Obama’s campaign if he had tried. And you have to wonder if that’s just what one friend of Wright wanted.

Shortly before he rose to deliver his rambling, angry, sarcastic remarks at the National Press Club Monday, Wright sat next to, and chatted with, Barbara Reynolds.

A former editorial board member at USA Today, she runs something called Reynolds News Services and teaches ministry at the Howard University School of Divinity. (She is an ordained minister).

It also turns out that Reynolds – introduced Monday as a member of the National Press Club “who organized” the event – is an enthusiastic Hillary Clinton supporter.

On a blog linked to her Web site- www.reynoldsnews.com- Reynolds said in a February post: “My vote for Hillary in the Maryland primary was my way of saying thank you” to Clinton and her husband for the successes of Bill Clinton’s presidency.

The same post criticized Obama’s “Audacity of Hope” theme: “Hope by definition is not based on facts,” wrote Reynolds. It is an emotional expectation. Things hoped for may or may not come. But help based on experience trumps hope every time.”

In another blog entry, Reynolds gives an ever-sharper critique of Obama: “It is a sad testimony that to protect his credentials as a unifier above the fray, the senator is fueling the media characterization that Rev. Dr. Wright is some retiring old uncle in the church basement.”

I don’t know if Reynolds’ eagerness to help Wright stage a disastrous news conference with the national media was a way of trying to help Clinton – my queries to Reynolds by phone and e-mail weren’t returned yesterday – but it’s safe to say she didn’t see any conflict between promoting Wright and supporting Clinton.

It’s hard to exaggerate how bad the actual news conference was. Wright, steeped in an honorable, fiery tradition of Bible-based social criticism, cheapened his arguments and his movement by mugging for the cameras, rolling his eyes, heaping scorn on his critics and acting as if nobody in the room was learned enough to ask him a question.

Wright has, unquestionably, been caricatured and vilified unfairly. The feeding programs, prison outreach and other social services he has built over more than 30 years are commendable, and his reading of the Judeo-Christian tradition as an epic story of people trying to escape slavery is far more right than wrong – and not something to be caricatured or compressed into a 10-second sound bite.

But Wright should have known – and his friend and ally Reynolds, a media professional, surely knew – that bickering with the press can only harm Wright and, by extension, Obama.

I hope that wasn’t their goal.

And “Lear on the Heath,” commentary on Wright’s speech and Obama’s response / The Huffington Post

What’s the chance that Wright’s latest act was designed to give Obama the excuse to denounce him, which he has now done? We’ll see if the denunciation clears the air. Regardless, if Obama gets beyond Wright,it will be only the first of the race cards that will be played against him.

Meanwhile, we should really be talking about Hillary’s repeated threats to “obliterate” Iran should they threaten any US allies in the Middle East – like the Saudi royal family. And would someone please fill me in on the “successes of Bill Clinton” that Rev. Reynolds refers to. Maybe she’s thinking of Rwanda or welfare “reform”.

“Man Overboard!”: Obama turns away from a drowning friend
By Mike Whitney April 30, 2008

After weeks of blistering attacks by the media, Barak Obama held a press conference yesterday and made it official; his friendship with the Reverend Jeremiah Wright is over, terminated, kaput. He would no longer associate with a man who believed that the United States of America could do horrible things to its people or that 9-11 might have been the result of US foreign policy. As Obama said, that’s just “outrageous”.

“I have spent my whole life trying to bridge the gap between different human beings…..That’s who I am and that’s what this campaign is all about. Yesterday we saw a very different kind of vision of America (Rev Wright’s speech to the National Press Club) I am outraged by the comments that were made and saddened over the spectacle. The Reverend Wright I saw yesterday was not the person I knew 20 years ago. His comments were not only divisive and destructive, but they give comfort to those who prey on hate. They do not accurately portray my values and beliefs. If Reverend Wright thinks that is ‘political posturing’ than he does not know me very well. And based on his comments yesterday I may not know him as well as I thought either.”

Blah. blah, blah. The media, of course, is elated with their victory; they’ve achieved their goal. They “persuaded” Obama to betray a friend. Mission accomplished. 1,816 articles appeared overnight on Google News celebrating the prodigals return to the fold; Barak is back. Hooray. Obama’s capitulation may be the greatest media triumph since the shrewish Linda Tripp produced the blue dress with the incriminating splotch. It just doesn’t get any better than this. Obama showed that he is not only willing to sacrifice his friends for his political ambitions, but that he’s also willing to distance himself from the very traditions and movements which made his candidacy possible. What more could they want?

But this is just the beginning of Obama’s political education and Wright is just one of many weapons that will be used to bludgeon the well-meaning candidate into submission. By inauguration day, he’ll have been stripped of his dignity, his aspirations, and his identity as a black American. In other words, he should be primed and ready to accept his duties as the next President of the United States.

This entry was posted in RagBlog and tagged Media, Obama, Presidential Campaign, Religion. Bookmark the permalink.