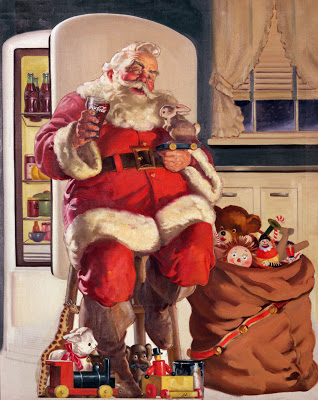 Does Santa exist? Coke thinks so.
The truth about Santa Claus

The hope of us all is not that children will finally learn that Santa Claus is not real but rather that adults will finally realize that he is very real.

Now they tell me.

But what, exactly, is the truth? Is it true that something we believe in doesn’t actually exist? What about the belief itself? Isn’t that a reality? What about religion? What about faith in the goodness of humanity? Are these just wishful thinking projections upon a hardcore downbeat materialist reality? If that is really true, then how did we get this far as humanity?

Cynicism may be a good defense in today’s competitive male dominant human environment, but if you can feel secure enough dropping your guard momentarily, consider for a minute with me, somewhat objectively, a few of the myths that have sustained us so far.

Like, Christmas, for example. Everyone knows that this day in December is the day that the baby Jesus was born miraculously in Bethlehem some 2,000 years ago. The Wise Men, one of whom is traditionally portrayed as a Black man, came from the East bearing gifts. Obviously the gifts had some special significance. Never mind that the historical Jesus, if (H)he existed at all, wasn’t born in December according to the New Testament.

You can add that to the fact that he also was never chosen to be the Messiah by the Jewish people (Bob Dylan and Jews for Jesus excepted), and that the whole scope of Christianity is an attempt to assume the identity of the historical Jews to usurp their place in “Heaven,” a concept totally alien to Judaism to begin with.

If you can get beyond all those factual problems, then the Christian faith may work for you. Most “God” fearing folk concede some or all of these inconsistencies but see local spirituality held in common and the teachings and good works of the Christian churches as adequate compensation. So is the fact that Christmas is in reality an ancient Pagan holiday an embarrassing anachronism or is it really the essence of the matter?

Like for example, why is it that in our materialist culture the only two days you are expected to give gifts are Christmas and on someone’s birthday? Isn’t it true that in many so called “primitive” cultures, gift giving is pretty much universal? You wouldn’t dare fall out of the gifting cycle in one of these communities for fear of social stigmatization. Who do these people think we all are? Santa Claus?

This gift giving thing can be just about as oppressive as our system of selfish self gain, but the social benefits in terms of personal and familial intertwining ties are immeasurable. Maybe this is why Christmas is both so important and so seemingly alien and hypocritical in our society. The tokenism of a single day of generosity stands out like an ancient monument. This is the day we are to behave like Christians for once, like the Wise Men, like Jesus (H)himself. Like Santa Claus for Christ’s sake.

So maybe like a day of fasting, of abstinence from eating flesh, or the vestiges of the Kosher Laws proscribing cruelty towards animals, Christmas is just that ancient monument. Like Stonehenge we ponder what its significance might have been. All the while we try to maintain our respective competitive advantages in the present day rat race, perhaps put aside for the day, perhaps not. But what if we were to ponder the true meaning of Christmas, ignoring for a moment the religious and commercial overtones, what are we left with?

The food, the family reunion, the delight of children, the sacred tree. The tradition of gift giving, though buried under layers of familial obligations, useless throwaway items, capitalistic “Yankee Swaps,” etc., is still there. Children and, potentially, even jaded often defrauded adults can see the glimmer of hope, for a day, maybe just for a second.

Still such a vision may be hard to shake. The hope of us all is not that children will finally learn that Santa Claus is not real but rather that adults will finally realize that he is very real. He is one of the Wise Men who once carried the knowledge forward to us. He has a gift to give and in that gift we learn to give ourselves.

Of course the man with the beard in the red suit exists. It is the rest of humanity whose future existence is questionable. The sooner we all start believing in Santa Claus the better.

2 Responses to Yes, Virginia : The Truth About Santa Claus