Yugoslavia : Precursor to the Bloodbaths in Afghanistan and Iraq 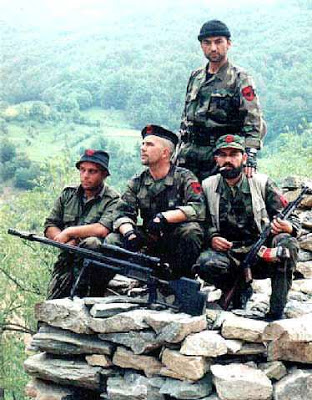 John Pilger digs beneath the received wisdom for the break-up of Yugoslavia and points to a largely ignored memoir by the former chief prosecutor in The Hague – and an echo from current events in the Caucasus.

Even as Blair the war leader was on a triumphant tour of “liberated” Kosovo, the KLA was ethnically cleansing more than 200,000 Serbs and Roma from the province

The secrets of the crushing of Yugoslavia are emerging, telling us more about how the modern world is policed. The former chief prosecutor of the International Criminal Tribunal for Yugoslavia in The Hague, Carla Del Ponte, this year published her memoir The Hunt: Me and War Criminals. Largely ignored in Britain, the book reveals unpalatable truths about the west’s intervention in Kosovo, which has echoes in the Caucasus.

The tribunal was set up and bankrolled principally by the United States. Del Ponte’s role was to investigate the crimes committed as Yugoslavia was dismembered in the 1990s. She insisted that this include Nato’s 78-day bombing of Serbia and Kosovo in 1999, which killed hundreds of people in hospitals, schools, churches, parks and tele vision studios, and destroyed economic infrastructure. “If I am not willing to [prosecute Nato personnel],” said Del Ponte, “I must give up my mission.” It was a sham. Under pressure from Washington and London, an investigation into Nato war crimes was scrapped.

Readers will recall that the justification for the Nato bombing was that the Serbs were committing “genocide” in the secessionist province of Kosovo against ethnic Albanians. David Scheffer, US ambassador-at-large for war crimes, announced that as many as “225,000 ethnic Albanian men aged between 14 and 59” may have been murdered. Tony Blair invoked the Holocaust and “the spirit of the Second World War”. The west’s heroic allies were the Kosovo Liberation Army (KLA), whose murderous record was set aside. The British foreign secretary, Robin Cook, told them to call him any time on his mobile phone.

With the Nato bombing over, international teams descended upon Kosovo to exhume the “holocaust”. The FBI failed to find a single mass grave and went home. The Spanish forensic team did the same, its leader angrily denouncing “a semantic pirouette by the war propaganda machines”. A year later, Del Ponte’s tribunal announced the final count of the dead in Kosovo: 2,788. This included combatants on both sides and Serbs and Roma murdered by the KLA. There was no genocide in Kosovo. The “holocaust” was a lie. The Nato attack had been fraudulent. 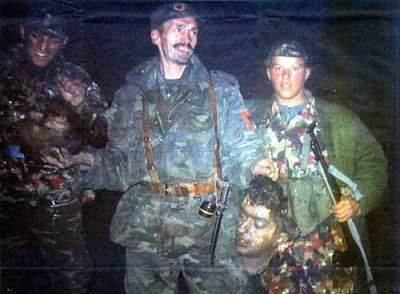 That was not all, says Del Ponte in her book: the KLA kidnapped hundreds of Serbs and transported them to Albania, where their kidneys and other body parts were removed; these were then sold for transplant in other countries. She also says there was sufficient evidence to prosecute the Kosovar Albanians for war crimes, but the investigation “was nipped in the bud” so that the tribunal’s focus would be on “crimes committed by Serbia”. She says the Hague judges were terrified of the Kosovar Albanians – the very people in whose name Nato had attacked Serbia.

Indeed, even as Blair the war leader was on a triumphant tour of “liberated” Kosovo, the KLA was ethnically cleansing more than 200,000 Serbs and Roma from the province. Last February the “international community”, led by the US, recognised Kosovo, which has no formal economy and is run, in effect, by criminal gangs that traffic in drugs, contraband and women. But it has one valuable asset: the US military base Camp Bondsteel, described by the Council of Europe’s human rights commissioner as “a smaller version of Guantanamo”. Del Ponte, a Swiss diplomat, has been told by her own government to stop promoting her book.

Yugoslavia was a uniquely independent and multi-ethnic, if imperfect, federation that stood as a political and economic bridge in the Cold War. This was not acceptable to the expanding European Community, especially newly united Germany, which had begun a drive east to dominate its “natural market” in the Yugoslav provinces of Croatia and Slovenia. By the time the Europeans met at Maastricht in 1991, a secret deal had been struck; Germany recognised Croatia, and Yugoslavia was doomed. In Washington, the US ensured that the struggling Yugoslav economy was denied World Bank loans and the defunct Nato was reinvented as an enforcer. At a 1999 Kosovo “peace” conference in France, the Serbs were told to accept occupation by Nato forces and a market economy, or be bombed into submission. It was the perfect precursor to the bloodbaths in Afghanistan and Iraq.

This entry was posted in RagBlog and tagged American Hegemony, Capitalism, Europe, Terrorism. Bookmark the permalink.

2 Responses to Yugoslavia : Precursor to the Bloodbaths in Afghanistan and Iraq