Zaid Jilani : Arab Countries Where the ‘Jasmine Revolution’ Could Spread 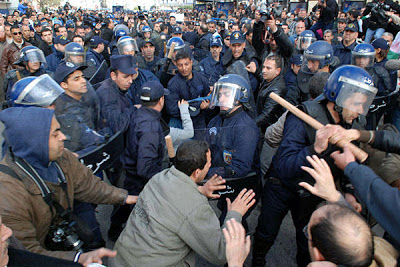 Algerian riot Police scuffle with protesters in Algiers, Algeria, Saturday. Thousands defied a government ban on demonstrations,but were outnumbered by police. Photo by Sidali Djarboub / AP.
Who’s next?
The ‘Jasmine Revolution’ and the Arab world

Last month, the world was shocked as the Tunisian autocrat Zine el-Abidine Ben Ali, who had ruled his country for 23 years, was overthrown in a protest movement that lasted only 29 days. The event was soon dubbed the “Jasmine Revolution,” a symbolic reference to a blooming flower.

While many doubted that this revolution would spread, it was only days later that massive protests rocked Cairo, resulting in the resignation of Egyptian President Hosni Mubarak, who had been in power for more than 30 years. While the fate of both countries is still unresolved, one thing is clear: the people are demanding democracy, and they have forced massive changes in their government to get it.

Now, many are wondering if this pro-democracy movement that swept Tunisia and Egypt will spread throughout the rest of the Arab world. ThinkProgress has assembled a short list of other autocratic regimes in the region that are facing protests, particularly today, and which may soon be the next to go in the Middle East’s next “Jasmine Revolution”:

An American abroad in Yemen captured the protests there, where Yemenis spontaneously erupted in protest and began marching to the country’s own iconic capital square — which is actually named Tahrir, just like Egypt’s. Watch it:

This list is far from comprehensive, as movements are being organized in a number of other countries such as Saudi Arabia and Oman. Whether these movements will ultimately be successful is unknown, but they symbolize a growing grassroots call for democracy that has been virtually unseen in the region. Given that the United States is a sponsor of many of the intelligence and military apparatuses of these countries and a close ally to their governments, we have not just an opportunity but a responsibility to work with the people towards a more democratic future.

[Zaid Jilani is a reporter for ThinkProgres and The Progress Report at the Center for American Progress Action Fund. He is a co-founder of Stand Up Magazine, a co-editor at the Georgia-based blog Georgia Liberal and on staff at BasedonBooks, the first website ever dedicated to movie reviews of book adaptations. This article was originall posted at ThinkProgress and was distributed by Truthout.]

ITN News has coverage of the protests in Algeria and Yemen: