The time is ripe for a discussion of the structure of a viable progressive organization. Now that the election cycle (and all it entailed this year) is completed, let the discussion begin. Here is a proposal from Ray Zwarich that can serve as a starting point for discussion. 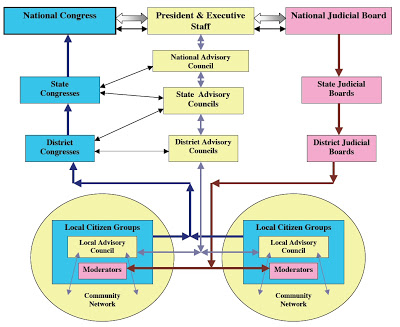 The chart represents organization by US Congressional districts, (which the ‘district’ level agencies represent). Local Citizens Groups, within Congressional districts, could be organized by existing defined wards and precincts, by zip code, by neighborhood, by issues affinity, or by other criteria as democratically established. See below for legend.
A Picture Plus 1000 Words – The True Democracy Project
By Zwarich / The Rag Blog / November 9, 2008

To My Fellow Progressives:

Amidst the post-election ‘what next?’ discussions that we hear on every side, I would like to make a brief presentation of a complex idea. Being brief is something I’m not very good at, as many may very well already know. (People who are at all familiar with my writing know that I am always far too ‘wordy’, a fault that I am trying to work on, but with only limited success).

I will try to present this concept in ‘a picture’, (an organizational chart), plus ‘a thousand words’, (I’ll try my best). The picture is the easy part. (Please see attached). The thousand words will be a challenge. (In a more thorough presentation that I am trying to finish, I have already written 13,000 words, and am just getting into ‘the meat’ of the idea).

I will try here, in these one thousand words, to simply present the basic idea, and not argue in favor of it, or present the level of detail to which I have already developed it. I hope that any who read this might consider circulating it among friends and associates. Plato posited that ideas exist apart from us, and that we do not create them, we only encounter them. Many others, including right here on The Rag Blog, (there have been comments wishing for a ‘people’s congress’), have had this same basic idea spring up in their own minds. I believe that it is an idea whose time has hopefully come.

I think we need to expand our thinking dramatically. We need to think in a far larger and broader paradigm than we have yet allowed ourselves. Simply put: we need to build a democracy of our own, by taking advantage of the full degree of power inherent in interactive digital communications, (whose potential we have exploited somewhat, but whose full power we have barely begun to tap). We need to build a ‘fully featured’ and robust democratic organization, whose purpose will be to pool our resources in order to communicate our powerful message of ‘Democracy’ and ‘The Common Good’, to ‘the masses’ of the American citizenry, (recognizing that in a democracy, ‘communication’ is THE most basic element in acquiring political power).

This democracy we need to build, to which I refer at this point as the True Democracy Project, will practice what it preaches. Its message will be manifest in its methods. Being assiduously and scrupulously democratic, to the greatest degree that we can devise, will be the most important policy of this democratic organization. Whatever agenda this organization might democratically establish, “our process (democracy) will be our most important policy”. Democracy, as extended to its inherent purpose, the promotion of the Common Good, will also provide the framework of our most Basic Message.

The long range concept will be to grow into a ‘party’. With that in mind, this organization should call itself the True Democrats, and advance the motto, (to encapsulate its basic credo), “If you don’t believe in True Democracy, DON’T call yourself a True Democrat”.

This name will allow this group to both identify itself with the existing Democratic Party, and at the same time challenge this existing party for legitimacy as the ONE party, (of the two major parties, as our system defines), that represents the interests of The People, against the interests of The Rich, (amalgamated capital, whose interests are legitimately represented by the Republican Party, but who have captured control of both parties, in a clear ‘taxation without representation’ system in which the Common Good is NOT currently represented). Thus the long range goal is NOT to build a ‘third party’, but rather to supplant the existing Democratic Party, and to become (or take over) one of the two ‘major parties’.

This democratic organization shall focus on the full development and exploitation of the power of interactive Internet communications capacity. It will require the development of considerably advanced new software. It will use this technology, (such as email list-serve type groups and forums, coupled with web-based networking capacity), to root the entire decision making apparatus of the organization in ‘The Will of The People’.

This organization will include a ‘Judicial Branch’ to guard the rights of The People. The forums through which the business of the group is conducted will be ‘moderated’, but all ‘moderation’ will take place after the fact, using the tool of ‘censure’ to punish behavior that does not conform to democratically established standards, rather than ‘censorship’, which governs behavior, (and destroys free speech, the most basic building block of True Democracy), before the fact. The insidious democracy-destroying power of censorship lies in the fact that The People are prevented from being aware of the behavior of the censors, and they have no recourse from their autocratic decisions.

All moderators will be officers of the Judicial Branch, and their decisions will be subject to appeal up the line of authority in this branch. (See organizational chart)

The ‘Legislative Branch’ will be directly connected to the citizen-membership through the capacity of the interactive digitally networked connection. Citizen-members, at the most basic ‘neighborhood’ level, will have the direct power to vote on all major decisions. Authority and responsibility will be delegated through a representational system, (for practical reasons), but all decisions of import will be voted on by referendum, through the software that will be developed, (and using practical quorum requirements as are established, perhaps through a proxy system; quorum rules must recognize that many people may not want to have the responsibility of maintaining highly detailed daily attention).

The ‘Executive Branch’ will also be rooted in The People, not only by selection of officers by direct election, but through a system of interactive communications ‘councils’, that reach all the way down to the neighborhood level of the organization, where ‘local councils’ will send roots out into the general community.

These three branches, reflecting the three basic functions of governance, will be defined by a robust system of checks and balances that will be established, through the definition and assignation of various powers, in the group’s constitution.

There perhaps should be two classifications of membership, ‘supporting members’, and ‘governing members’.

Governing members, those who will have the right to vote, will pay regular dues, at a modest and affordable level. Dues money will be split, by statutory formula as democratically established, between the various levels of organization.

We must realize that ‘politics’ is a numbers game, and that the numbers are VERY large. The object of the ‘game’ is to get the most people on our side, and to do that we must communicate with them. We must develop the capacity to communicate with tens, and hundreds, of millions of people.

We must set the goal of building an organization that is completely scalable, that is fluidly capable of starting small, but is designed to build a membership of millions. If dues are set at merely $5 per month, an organization with 100k dues-paying citizen-members would (obviously) have an operating budget of $500k per month. But we must extend these projected numbers into the millions. An organization of a million members could do a LOT of communicating with $5 million per month. (And so on). Any who doubt that massive numbers of people would be willing to pay regular dues to an organization that benefits them directly, (by directly empowering through True Democracy), please consider that AARP currently has 35 million dues paying members, (and all it offers is some sham discounts on motel rooms and insurance policies).

If we pool our resources in this way, the ‘whole’ will be far greater than ‘the sum of its parts’. Many polls indicate that at least 7% of the current voting population, (a percentage that translates to 14 million American citizens), strongly identify themselves as progressives. If we could organize even half that number, we would have an organization with a budget of $420 million per year to use for constant and ongoing communication of our simple and powerful message of Democracy and the Common Good.

(My one thousand word limit looms. Only a few words left to sum up)

I hope that any who read this will be interested in discussing this further. I would love to share the extended material I am working on, (hoping to finish in the next few days). A project of this magnitude would require the efforts and energies of a significant number of people of diverse skills and talents, (political scholars, veteran organizers, software developers, fund raisers, etc, as well as, of course, citizens who are eager to be empowered).

I hope that anyone interested will feel free to contact me, or else take this idea and develop it yourselves. To have any chance at all to be successful, NO one can ‘own’ it. (And if anyone tried to do so, if anyone tried to maintain control by building in ‘back channel’ levers of power, the very integrity on which this idea wholly depends would be destroyed, and whatever organization was built would fail (miserably) to reach this potential). To succeed, this idea, and whatever we build from it, must be democratically owned by ALL of us.

This entry was posted in RagBlog and tagged Democracy, MDS, Progressive Movement. Bookmark the permalink.