Bernardine Dohrn and Bill Ayers : Why We Oppose NATO 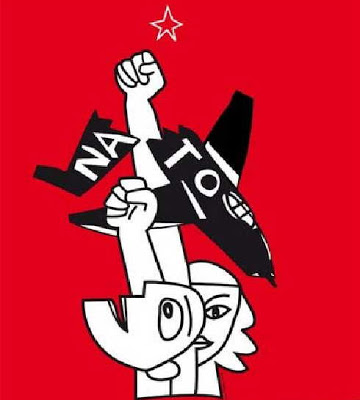 Graphic from Left Turn :: Virage a Gauche.
Why we oppose NATO!

The new NATO is a secretive and costly instrument of war and aggression. It makes its own rules and confirms its own authority.

The day after the 9/11 attacks the Bush administration took dozens of extreme, transformative actions, including invoking Article 5, the right to collective self defense, of NATO’s founding charter — a first in NATO’s 50-year history.

This marked the fateful expansion of NATO’s mission into new geographical regions (such as Afghanistan) and novel functions, such as the initiation and rationalization of the use of preemptive attacks on sovereign states.

All of this was codified and consolidated over the next months in support of the U.S. “war on terror,” crimes committed by non-nation state actors were reframed as “acts of war,” and NATO nations were now expected to join together and respond in kind, opening a door onto war without end, worldwide conflict, and the “long war.”

This is why groups of citizens in virtually every NATO nation have come together to press their governments to leave this deadly enterprise.

NATO has become part of the background noise that over time and with repetition we simply take for granted, an unexamined but passively accepted part of the given world: “NATO forces…” “NATO bombings…” “NATO casualties…” NATO becomes a familiar and entirely opaque presence in our lives. In reality NATO is anything but benign, and exposing the reality behind the mask is an urgent responsibility.

NATO is not a mutual self-defense organization; it is now plainly a global military alliance designed to engage in aggressive invasions and preemptive wars. A 2004 communiqué declared that “Defense against terrorism may include activities by NATO’s military forces, based on decisions by the North Atlantic Council [not the UN Security Council] to deter, disrupt, defend and protect against terrorist attacks, or threat of attacks, directed from abroad, against populations, territory, infrastructure and forces of any member state, including by acting against these terrorists and those who harbour them.”

NATO has collaborated with the U.S. CIA in a wide range of illegal activities, including detainee transfer operations called “renditions,” blanket over-flight clearances, and access to airfields for CIA operations — in effect acting as partners in torture, abduction, and indefinite detention. Under cover of NATO, the U.S. has created an entirely unaccountable framework that enables it to evade both national and international law.

NATO has refused to address civilian casualties resulting from NATO bombings and drone attacks in Afghanistan, Pakistan, and Libya. The U.S. continues to dominate NATO military strategy and weaponry, accounting for virtually all of the 7,700 bombs and missiles dropped or fired on Libya.

The new NATO is a secretive and costly instrument of war and aggression. It makes its own rules and confirms its own authority. As a tool of global intervention NATO undermines democracy and constricts citizen participation on issues of war and peace. It has no place in a democracy, and an authentic democracy should have no business with NATO.

[William Ayers is Distinguished Professor of Education and Senior University Scholar at the University of Illinois at Chicago. Bernardine Dohrn is Clinical Associate Professor of Law and Director and founder of the Children and Family Justice Center at Northwestern University. Both Ayers and Dohrn were leaders in SDS and the New Left, and were founders of Weatherman and the Weather Underground. Find more articles by and about Bill Ayers and Bernardine Dohrn on The Rag Blog.]