What They Say About ‘The Rag’

The Rag “was a spirited, quirky, and humorous paper, whose founders pushed the New Left’s political agenda even as they embraced the counterculture’s zeal for rock music, psychedelics, and personal liberation,” — John McMillian, Smoking Typewriters: The Sixties Underground Press and the Rise of Alternative Media in America 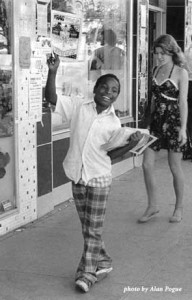 The Rag was “one of a few legendary undergrounds… probably the first totally Movement paper… [it was] singularly successful in creating a politically and culturally radical community in Austin.” — Laurence Leamer, The Paper Revolutionaries: The Rise of the Underground Press

The Rag was “one of the first, the most long-lasting and most influential” of the Sixties underground papers – Paul Buhle, introduction to On the Ground, An Illustrated Anecdotal History of the Sixties Underground Press in the U.S.

“The Rag was the first independent undergrounder to represent…the participatory democracy, community organizing and synthesis of politics and culture that the New Left of the midsixties was trying to develop.” — Abe Peck, Uncovering the Sixties: The Life and Times of the Underground Press

“First at Austin’s Rag, then at LNS, and soon nationwide, the underground press proved wildly successful at developing collective work structures that entwined political and cultural radicalism… The ‘Ragstaff’ pioneered the underground application of participatory democracy” and “shaped the Movement’s cultural politics in Austin.” — Blake Slonecker, A New Dawn for a New Left

“The vibrancy of The Rag… demonstrated that the allure of the underground press was hardly limited to the two coasts and was resonating across the American landscape… Given its location in Austin, one of the epicenters for both the Movement and the counterculture, The Rag and its history remain of considerable import in understanding the era’s zeitgeist.” – Robert C. Cottrell, Sex, Drugs, and Rock ‘n’ Roll: The Rise of America’s 1960s Counterculture

“Only a handful of its kind preceded it, and only a handful would outlast it…That the Rag was kept alive for so long is an achievement, but the fact of its being managed solely through collective effort is mind boggling.” – Susan Torian Olan, “The Rag: A Study in Underground Journalism.”

‘The Rag put down roots in a community that came to regard it as a beautiful
and precious thing.’

“…by championing New Left values, challenging local officials and the mainstream media with bravado, and blossoming into the most visible representation of Austin’s oppositional culture, the Rag…put down roots in a community that came to regard it as a beautiful and precious thing.” — John McMillian, ‘Smoking Typewriters’

The Rag was “enormously important to local activists.” – Historian Douglas Rossinow, The Politics of Authenticity

The Rag was “a firebrand little troublemaker” that was “a seminal influence in the national underground press movement.” – Kevin Brass, Austin Chronicle

“The Rag was at the forefront of the Vietnam era underground press movement… It had a remarkable 1966 to 1977 run, and it put Austin on the nation’s countercultural map through a then novel and offbeat combination of psychedelic art and political and cultural news.” – Cheryl Smith, Austin Chronicle

The Rag “looked like it came off a press in somebody’s garage… [It] parroted the mindless rhetoric of the moment.” — Terry Frei, Horns, Hogs, & Nixon Coming: Texas vs. Arkansas in Dixie’s Last Stand 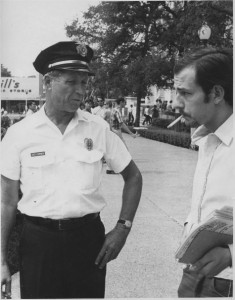 Rag Funnel Thorne Dreyer, with copies of The Rag, confronted by Kampus Kop on UT campus, 1966.

“Rag staffers shared a sense of outrage; they saw the written word as an instrument for change and felt an enormous responsibility to their readers.”  — Sarah Weddington, A Question of Choice: The Lawyer Who Won Roe v. Wade

The Rag was “a highly imaginative paper with lots of graphics and articles about both local and national issues,” — Robert Pardun, Prairie Radical: A Journey Through the Sixties

“The people who put The Rag together were the same people who conceived demonstrations and love-ins, who were among the leaders of confrontations with local authorities, and who were at the forefront of local cultural gatherings.” – Thorne Dreyer and Victoria Smith, “The Movement and the New Media,” Liberation News Service, 1969

“The Rag covered what was not covered by the ‘straight’ press. The writers participated in the political and cultural uprising and also wrote about it. And they told you where to get a chicken dinner for 35 cents.” – Alice Embree, Austin activist and former Ragstaffer

“[One] could not have imagined a more democratic process than a Rag copy meeting. An all-volunteer group of self-taught editors and copy writers debated the sexism and violence in pornography, the corporate influence in utility policies, and the CIA’s involvement in Chile. And how much space went to the Free Clinic benefit and the Freak Brothers.” – Glenn Scott, Austin union organizer, filmmaker, and former Ragstaffer

‘We not only wrote about the news, but we were making the news.’

“I think [The Rag] was important because it was the beginning of alternative press.” – Barbara Hines, UT-Austin clinical law professor and former Ragstaffer ”

The Rag simply went dormant, and in fact, has come to life… as a blog initiated at the Rag Reunion…. The Rag legacy carries onward even as so few people of the new Austin generation appreciate the impact that it had on their city and so much of what makes it a vibrant place to live.” – Melanie Scruggs, “The Rise and Fall of The Rag”

“The Rag holds a major place in Austin’s political and cultural history, and its return is a reason to celebrate.” – Eddie Wilson, owner, Threadgills; co-founder, Armadillo World Headquarters (1970-1981)

“The Rag Blog is in many ways what The Rag of Austin, Texas, was in the middle 1960s, a light in the darkness.” — Paul Buhle, historian and publisher