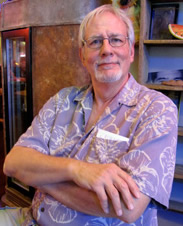 Thorne Dreyer edits The Rag Blog, hosts Rag Radio, and is a director of the New Journalism Project. An Austin-based writer, editor, broadcaster, and activist, he is a veteran of SDS and the Sixties New Left, and was a pioneer of the  underground press movement. Dreyer was founding “funnel” of The Rag in Austin in 1966, a member of the editorial collective at Liberation News Service (LNS) in New York, and a founding editor and publisher of Space City! in Houston.

Dreyer was general manager of KPFT-FM, Pacifica radio in Houston, where he hosted a popular talk show, the Briarpatch, and was founding editor of the Mighty 90 News, and was also a contributor to the early Texas Monthly magazine. He served as a public information officer for the City of Houston under Mayor Fred Hofheinz and owned and operated a prominent political public relations business in Houston. Dreyer worked as an actor, a bookseller, a union booking agent, and an event producer, and managed a jazz club. His coverage of the Sixties movement appeared in dozens of publications around the country and his writing has been cited or excerpted in numerous books about the era.

Dreyer is a contributor to Truthout, a contributing editor to Next Left Notes, a featured columnist at Veterans Today, and a member of the advisory board of the Austin Bulldog investigative journalism site. Dreyer was named Austin’s best political blogger by CultureMap Austin and won the Uranium Savages’ Eddy Award for best Austin radio show host.