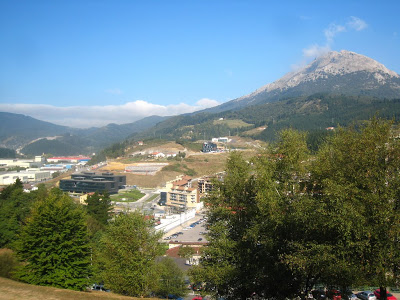 “This is not paradise and we are not angels.” — Mikal Lezamiz, Director of Cooperative Dissemination, MCC

[This is the first of a five-part series by Carl Davidson.]

BASQUE COUNTRY, Spain — After a short bus ride through the stone cobbled streets of Arrasate-Mondragon and up the winding roads of this humanly-scaled industrial town of Spain’s Basque Country in a sunny fall morning, taking in the birch and pine covered mountains, and the higher ones with magnificent stony peaks, I raised an eyebrow at the first part of Mikel’s statement.

The area was breathtakingly beautiful, and if it wasn’t paradise, it came close enough.

I’m with a group of 25 social activists on a study tour organized by the Praxis Peace Project. Our focus is the Mondragon Cooperative Corporation, a 50-year-old network of nearly 120 factories and agencies, involving nearly 100,000 workers in one way or another, and centered in the the Basque Country but now spanning the globe.

We’re here to study the history of these unique worker-owned factories, how they work, why they have been successful, and how they might be expanded in various ways as instruments of social change. Georgia Kelly of the Praxis Peace Project is our cheerful and helpful tour leader, but Mikel is our MCC host in charge of teaching us what he knows.

The MCC reception center is part way up on a slope of a much larger mountain, but it offers a magnificent view of the town and the dozens of industrial and commercial cooperatives in and around it in the valley below. After watching a short film on the current scope of MCC, we move to a lecture room for Mikal’s talk. The signs on the wall say “Mondragon: Humanity at Work: Finance-Industry-Retail-Knowledge,” in Basque, Spanish, and English.

“Humanity at Work,” Mikal starts off, reading the slogan. “This means we are the owners of our enterprises, and we are the participants in their management. Our humanity comes first. We want to have successful and profitable businesses and see them grow, but they are subordinate to us, not the other way around.”

The other part of the slogan — finance, industry, retail, knowledge — refers to the scope of the cooperatives. Of the 120 workplaces, 87 are industrial factories, making everything from kitchen appliances and housewares, to auto parts, computers, and machine tools. One of the coops is a large bank, Caja Laboral. One is a Mondragon University, with some 3,600 students; seven others are research and development centers. One is retail, the huge network of hundreds of Eroski supermarkets and convenience stores, four are agricultural, and six are social service agencies managing health care, pensions, and other insurance matters.

Mikal also introduces this by telling us a little about where we are. The Basques are among the oldest people in Europe, with a unique language, unrelated to any others. They have a strong sense of culture and solidarity, and an ongoing quest for autonomy, even independence, from Spain.

The region is made up of four political divisions in Spain and two just across the Pyrenees in France, with 3 million Basque inhabitants there and another 3 million living abroad. They were a center of resistance to Franco’s fascist regime, and have won a good deal of autonomy today in some of the districts.

After World War II, the area was poor and devastated, and the Franco regime was in no mood to give it much help. But one who did rise to the challenge was Father Jose Maria Arizmendiarrieta, a priest who had fought Franco, ended up in prison, but managed to get released instead of executed. Father Arizmendi, as he is popularly called, was assigned by the church to the valley in the Basque containing the small town of Arrasete-Mondragon.

He set to work trying to solve the massive war-created problems at hand. He began building a small technical school, and then a credit union where the region’s peasants and workers pooled meager funds. After a few years, with just five of the best students of the school, he started a small factory making one product: a small paraffin-burning stove so people could cook and heat water. It was a good stove, and sold well.

Most important, he gave the project a set of ten carefully thought-out principles to serve as guidelines for the current and any future endeavors:

How each of these is implemented, and with what success, will be spelled out in this series of diaries — at least I’ll give it a good shot. But following this introduction and a barrage of questions — Mikal answered a good many — he soon had us all get back on the bus. The best way to learn was to see for ourselves. So he took us off to FAGOR, the relatively large industrial coop that had grown from the first tiny shop that built that first small paraffin stove.

FAGOR today is several connected coops with about 6,000 workers overall, both here in the Assante-Mondragon area and in China. All the employees in the Basque areas are worker-owners; those elsewhere are in varying stages of becoming so.

As we got off the bus, we were at a large modern structure that could easily enclose several football fields. We were given headsets so we could hear our young woman guide over the din of the assembly lines. Once inside, we saw a very modern and computer-assisted assembly line that was putting together household washing machines, from beginning to end. It wasn’t completely automated; workers were required at many points, especially at those checking quality.

This quality was a hallmark of MCC products generally. They compete by selling very high quality goods at reasonable prices and good service. They have very few supervisors. I didn’t see a single one covering the whole process of making the washing machines, and later some convection ovens, from one end of the line to the other. Self-supervision was thus a competitive advantage. Not having a lot of supervisors to pay means lower prices.

Before the crisis hit two years ago, 15 percent of FAGOR’s workers were temporary “trial period” new hires, meaning they couldn’t become worker-owners for six moths to a year. All these were laid off due to the fall in demand, but all the regular worker-owners remained on the job or were shifted to other related coops.

At the moment, the workers were on two shifts. “One group starts at 6 a.m. and ends at 2 p.m.,” our guide explained. “The other goes from 2 p.m. until 10 p.m. There are breaks every two hours, after which each worker can take a different position on their section of the line. The workers decide this rotation among themselves. It helps with safety and spreads skill sets around.”

We noticed that some of the components were in boxes shipped from other countries, and asked Mikal about it. “Our policy for purchasing is set by three things — quality, price and service. If an outside firm does better, we use them.”

He picked up a wiring harness from a box.

Here is a good example. We used to have this made by one of our student-run coops. They had two products, this wiring set and another computer component. The quality and service was good, but the price was poor. This piece, made in Turkey was just as good, the Turkish firm had good service, but at a much lower price.

Our students only worked a four hour day, and paid themselves 550 Euros a month, but the Turkish workers put in 60 hours at 200 Euros. In that situation, we encouraged the students to shift to improving the product where they were better, and to design new products.

Some in our group groaned at the concept, but others felt that, given a market economy, it was the best way to handle the problem — although raising the conditions of the Turkish workers would be a good idea, even if beyond the reach of MCC at the moment.

One thing that stood out of the Fagor line was a concern for both safety and quality. One hundred percent of the machines were tested on the line for safe operation, and another 3 percent were tested again at random just before final packaging. There were numerous station stops where workers kept daily records of any accidents — a green smiley face sticker was a good day, a red frowny face was a problem day. I only saw one red face on a chart on the entire line.

FAGOR is producing 850,000 units a year, shipped mainly throughout Europe. Their pressure cookers are very popular in U.S. department stores.

After a delicious and leisurely lunch, Mikal gave us another talk, stressing two topics — the spread of MCC to other countries, and its ongoing and often difficult efforts to transform its factories in areas outside of the Basque country into full worker-owned cooperatives.

Of the 100,000 people who work for MCC, of the 39,000 in the Basque Country, some 99 percent are worker-owners. Of the 40,000-to-50,000 recently brought into MCC in the rest of Spain, Portugal, and parts of France, many are in various stages of becoming worker-owners, although some are discouraged by the low or negative earnings in the last two crisis years. The remaining 17 percent in countries like China and Brazil still remain wage labor in firms owned by MCC. MCC, however, is still trying to find ways to deal with local laws and customs in these countries to make a full transformation.

This discussion ran into overtime, so the last part of day one, a visit to an Eroski supermarket, was limited to 30 minutes. This one, a full-sized supermarket, was an excellent facility, owned both by all the workers and many consumers as well. Think of it as a high quality worker-owned Walmart combined with a Whole Foods with much lower prices, and you’ll get a reasonably good idea on what it was like. But all I can vouch for at this point is that the fair trade 70 percent chocolate bars come very close to being a small piece of paradise.

[Carl Davidson is a national co-chair of the Committees of Correspondence for Democracy and Socialism, a national board member of Solidarity Economy Network, and a local Beaver County, PA member of Steelworkers Associates. His website is Keep on Keepin’ On, where this article also appears. Davidson is also available to speak on the topic. Contact him at carld717@gmail.com. For more info on these tours, go here.]

1 Response to Carl Davidson : Mondragon Diaries I: Bridges to Socialism