In the Wake of Martha Coakley : Moving Right Along 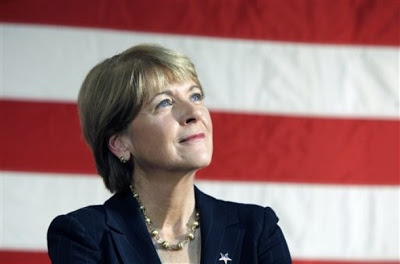 Martha Coakley: sad state of affairs. Photo from AP.
In the wake of the Coakley debacle:
A lesson to be learned?

I would not lead you into the promised land if I could, because if I led you in, someone else would lead you out. You must use your heads as well as your hands, and get yourself out of your present condition. — Eugene Debs

Much ado has been made of Martha Coakley’s defeat in the race for the U.S. Senate seat left vacant by the late Ted Kennedy.

Ranging from Rachel Maddow describing the Democrats as a “circular firing squad,” to Alexander Cockburn contending that “Obama has disappointed so many constituencies that a rebuke by the voters was inevitable,” progressive commentators have already assigned blame.

Blame has been assigned to Coakley as well, for running an unfocused, lackluster, and complacent campaign. Considerable blame has been laid at the feet of President Obama. Some of the criticism centers on the perception that Obama largely ignored the race until its final days, that he shouldn’t have taken the outcome for granted, and should have personally intervened earlier.

Some of the criticism reaches farther, contending, as does Cockburn, that Coakley was largely a surrogate for Obama, and her defeat really registered voter discontent with the Obama administration. Among the most vitriolic of this type of criticism is that of David Michael Green in his Regressive Antidote blog:

The very same people who might have swallowed hard and reluctantly followed the lead of inspirational new president Obama one year ago, today will join everyone else in the world and spit in the eye of useless, feeble, washed-up Barack…

Green then blamed Obama for the “grandest act of betrayal we’ve seen since Benedict Arnold did his thing.”

Yet there is a larger lesson this blame game has overlooked.

That lesson has to do with the nature of the political system itself. Under our constitutional form of government, citizens have come to believe that in a republic, or a “representative democracy” as it is sometimes known, their responsibility is to turn out at the polls every two or four years and elect someone. In other words that, like professional wrestling on television, politics is primarily a spectator sport. Whoever is elected is supposed to represent their interests.

Close observers of the process know it doesn’t typically work out that way. Those elected tend to best represent those who helped finance their campaigns or provide other means of support. This is what is meant by terms like the “revolving door” or the “iron triangle.”

Republicans and Democratic elected officials alike share in the largesse, while many voters — Republican, Democratic, and independent — believe their interests should be served above, or at least alongside, those of the elites.

Arguably, Democratic voters are more likely to be “idealistic” and subscribe to the idea that the political process should serve the broader “public interest” rather than the “trickle-down” market forces Republicans believe is the key to prosperity for all. When rank-and-file voters observe bank bailouts and exorbitant executive compensation packages while foreclosure and unemployment rates climb, or observe benefits flowing to the insurance industry, while health care reform tanks in the Congress, they become disillusioned with the Democrats they entrusted to fix a broken system.

It is, of course, a misconception to believe the leadership of the Democratic Party, the “corporate liberals” as former SDS President Carl Oglesby once referred to them, will ever fix a broken system. What can and should be expected of the Democrats is twofold. First, that they are the “anti-Republicans.”

Second, the Democrats, as Barack Obama did openly during his 2008 campaign, offer “hope.” Social change, it can be argued, takes place on the basis of hope, in the belief that “a better world is possible.” It does not matter so much that the hope offered by the Democrats may be largely hollow, or a sham. What is important is that it is offered at all.

It is up to progressives who understand that the Democrats will not deliver on their promises to see this as an opportunity and use it to capitalize on the expectations that they raise. A critical aspect of what must be done is to disabuse the popular notion that the Democrats, or anyone other than the people themselves, will faithfully “represent” the public interest. As Eugene Debs once said, “I would not lead you into the promised land if I could, because if I led you in, someone else would lead you out. You must use your heads as well as your hands, and get yourself out of your present condition.”

Among those who already comprehend at least some aspect of this logic is Melissa Harris-Lacewell, a Princeton professor of African-American Studies and MSNBC commentator. In a recent Bill Moyers Journal episode, Professor Harris-Lacewell noted that of late Republicans have actually been more “democratic” (or at least populist-oriented) than the Democrats. This has clearly been true with the “tea-baggers,” regardless of their mobilizers and their motivations.

On that same Moyers Journal episode, CUNY English professor and Nation columnist Eric Alterman commented that the Democratic Party leadership do not want their base to be fired up; that if they were, they would be difficult to control.

Progressives must sow the perception that politics in a democracy is not an occasional polling place proposition; that in a democracy civic engagement is not only important, but absolutely essential. This was dramatically underscored by the recent U.S. Supreme Court ruling that will allow corporate money to further dominate campaign spending and advertising.

The domestic agenda of the Obama administration has provided some excellent openings for mass public engagement and for progressive organizing: his stated priorities have included health care reform, rebuilding the economy, and environmental protection.

That progressives have failed to coalesce around a substantive push for single-payer health care is not the fault of the Obama administration, it is the fault of progressives for not taking advantage of the opportunity that has been offered them. Much can be said for the other major elements of Obama’s agenda, there is not much evidence of concerted progressive effort to demand that these promises be kept, nor of effort to use these openings to push even farther.

This is the challenge for those who wish to see democracy fulfill its potential. As Harvey Wasserman tells us on The Rag Blog, “Having taken office on the sales pitch of ‘Hope,’ the Democrats can be counted on only for timidity and incompetence. The grassroots can do better. As always, that’s where our true hope resides.”

Or, as Crosby, Stills, Nash and Young told us 40 years ago this spring, “We’re finally on our own.”

5 Responses to In the Wake of Martha Coakley : Moving Right Along