RAG RADIO / Thorne Dreyer : Economist Gar Alperovitz Asks, ‘What Then Must We Do?’ 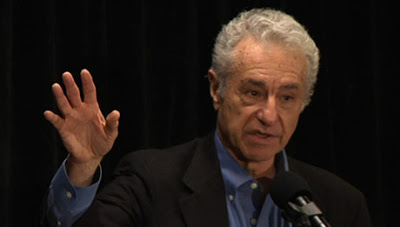 Rag Radio podcast:
Political economist Gar Alperovitz,
author of ‘What Then Must We Do?’

“Like a picture slowly developing in a photographer’s darkroom, the potential elements of a new system, of something meaningful and very American, are beginning to emerge.” — Gar Alperovitz

Political economist Gar Alperovitz, whose new book is What Then Must We Do?: Straight Talk About the Next American Revolution, was our guest on Rag Radio, Friday, May 10, 2013. Rag Radio is a syndicated radio program produced at the studios of KOOP 91.7-FM, a cooperatively-run all-volunteer community radio station in Austin, Texas.

Listen to or download our interview with Gar Alperovitz here:


On the show, Alperovtitz talks with host Thorne Dreyer and The Rag Blog‘s Roger Baker about issues raised in his new book, What Then Must We Do?.

In the book, Alperovitz speaks about “why the time is right to democratize the ownership of wealth to strengthen our communities and our nation, through local cooperatives, worker-owned companies, and independent business, as well as larger publicly-owned enterprises and reinvigorated institutions.”

Alperovitz told the Rag Radio audience that “we are living in a systemic crisis, not simply a political crisis… You see that the long, long trends — for 30 years or more — simply don’t much change if you elect this politician or that politician.”

“Over the last 30 years,” he said, “real wages for most people have simply not moved up or down more than a few pennies. The top one percent has increased its income share over that 30-year span, from 10 percent to more than 20 percent. Over 30 years the top 1 percent has taken just about all of the gains of the economic system.”

And, he added, “That’s extraordinary.”

The new book, he says, documents “trend after trend after trend where the big picture keeps getting worse — or nothing gets better. Poverty increases, the incarceration rate has gone up dramatically… CO2 production has gone up 30 percent… On many many fronts, the trends don’t much change, and things get worse, and that tells you that something deeper in the system is at work.”

“And,” Alperovitz said, “I don’t think its going to change until we actually begin slowly but steadily evolving… and moving towards what can only be called a different system in the United States, something different from corporate capitalism. And certainly different from state socialism or communism. Something that has an American flavor and development.”

“And,” he added, “the book suggests that, partly because of the pain levels, and because things aren’t working for people, if you look closely there’s a lot of developments that are going in a new direction. And a lot that the press certainly doesn’t report on.”

Alperovitz believes that many encouraging things are happening largely under the radar in this country, including the burgeoning workers’ cooperative movement and other public experiments that are addressing democratization of the economy.

“Like a picture slowly developing in a photographer’s darkroom, the potential elements of a new system, of something meaningful and very American, are beginning to emerge,” he writes.

According to Daniel Ellsberg, “For decades, Gar Alperovitz has been at the forefront of attempts to understand what could lie beyond our increasingly broken system of corporate capitalism,” and his new book “offers by far the most serious, intellectually grounded strategy for system-changing yet to appear.”

University of Texas economist James Galbraith calls Alperovitz’s book a “cooperative and democratic manifesto,” and says, “May his ideas and ideals flourish.”

And Bill Fletcher Jr. wrote in a review of What Then Must We Do?, published on The Rag Blog, that Alperovitz “proceeds to identify actual examples of different struggles and projects that have been undertaken by progressives that show that a different way of organizing life and the economy is not only a great idea, but living reality.”

Fletcher writes that, “The reforms proposed are both clear and compelling and, in many cases, achievable.”

But he also suggests that Alperovitz’s strategy as incomplete: “The struggle for structural reforms and survival presented by Alperovitz is essential in cornering the political Right and changing the ‘common sense’ of the U.S. political arena. But it is not enough to wound the rabid beast; one must ultimately bring it down.”

According to Fletcher, “Alperovitz’s platform is at best one component in a much more long-term socialist strategy.”

Gar Alperovitz has had a distinguished career as a historian, political economist, activist, writer, and government official. He is currently the Lionel R. Bauman Professor of Political Economy at the University of Maryland; was co-founder of the Democracy Collaborative; and is a former Fellow of Kings College, Cambridge University, Harvard’s Institute of Politics, and the Institute for Policy Studies; and a Guest Scholar at the Brookings Institution.

He is the author of critically acclaimed books including America Beyond Capitalism and The Decision to Use the Atomic Bomb, and his articles have appeared in The New York Times, the Washington Post, The Los Angeles Times, the New Republic, The Nation, and the Atlantic, among other popular and academic publications.

Also see Roger Baker’s review of Alperovitz’s earlier book, America Beyond Capitalism, at The Rag Blog, and listen to the podcast of our February 3, 2012, Rag Radio interview with Gar Alperovitz.

Coming up on Rag Radio:
THIS FRIDAY, May 31, 2013: Philosophy scholar Bill Meacham, author of How to Be an Excellent Human.
Friday, June 7, 2013: Mother Jones correspondent Tom Philpott on agricultural sustainability and the “Politics of Food.”

1 Response to RAG RADIO / Thorne Dreyer : Economist Gar Alperovitz Asks, ‘What Then Must We Do?’