A Special to the Rag Blog from OneLove, Our Foreign Correspondent 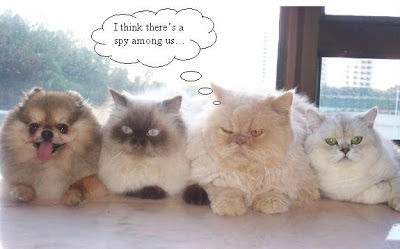 Ahh, ain’t it a bitch. Your friend, buddy, Lover, comrade, comrade in arms, Brother, Sister, Affinity group member, long time associate, trusted mentor, favorite protege, You know who I mean. The ones you need to form the fist that will represent you and strike the blow in the grand struggle.

Every struggle has many fronts, yours deserves an opportunity. We have a right to assemble, to offer our solutions, to demonstrate, picket, march, write letters, communicate amongst ourselves, defend ourselves and to act against our common enemies. The enemy, our enemy, has no right to spy on us. In fact our enemy has no rights at all. That doesn’t stop them. So, What is to be done?

Be pro-active. Don’t just trust anyone, check them out. First the gut-check, get down with them, find out what they really believe, which side they are really on, where they are coming from, their class, class background, and class stand. Dig deep, where did they grow up, how did they grow up, what is it about them and their
experience that draws them to your particular struggle at this time. Sometimes there seems to be no rational reason for them to be on your side. No one acts without reason, what is their reason to organize or join an organization?

There have always been spies, traitors to the cause, and some are heartbreaking. Dovey Greenglass sent his sister to the electric chair. David Kazinsky sent his brother up for life. George Demmerly sent Sam Melville to his death sentence in D yard. A rat sent Lee Otis Johnson up for 40 years, and ruined his life. Now this latest rat plans to send the Texas 2 to prison. Security is important, you can’t
let them exist in your community or organization. In Chicago ’68, a pig disguised as a biker was allowed to hang out with people, many people spotted him as a pig, but didn’t takes appropriate action on the theory that “every one knows he’s a pig, let him hang with us and don’t tell him nada.” Later at a trial he came to the stand, with pictures of himself hanging with the some of the defendants, and then invented tales of what was discussed, all lies, but the fact that he could show he was there was enough to convince some on the jury that he had knowledge. By the way, even that jury had a spy on it.

Years ago checking someone out was difficult, but not impossible. At one time we had a connection in a large Insurance company, the company had a computer that listed every insurance policy held by anyone in the U.S. Life, health, car. homeowners, whatever, we used that to uncover a couple of pigs. Now-a-days we have our own computers. We can easily find out about anybody, court appearances, property owned, work records, driving records, tax records, marriage and divorce records, are all at our finger-tips. Use them. Will it cost you or your group a few dollars? Yes it will. Is it worth the expense? Compare to the legal and political costs of Brandon Darby’s spy-provocateur act.

Someone like Darby is much more of a problem. Someone already on the inside, then later turned out by the man. Not everyone trusted him; they should have done their homework, not just avoided him or the issue. I recommend the LSD test, but that’s not for everyone, remember the first cosmic commandment, “Thou shall not alter another’s consciousness.” That means No Dosing. However, group or family travel presents ample opportunities. Create unnerving situations and ask sharp questions.

In the current case, it would be interesting for some journalists to make a Freedom of Information Act request about any case numbers the lawyers can uncover. The initial FBI interview with Darby will tell you a lot. Where was the interview held? Did they twist his arm? They once twisted mine on a street in Washington, D.C. Did they offer him $$$? Colin Nyburger was once offered $200,000 for a secret. Did they chase him up the street shouting, “We don’t want to hassle you?” They did that to me, also, in Eugene, OR. Did they threaten to expose some dirty deed about him? Like they did to the in-the-closet gay FIFTH ESTATE snitch? The answer would be revealing. Maybe they jammed the guy up in some way, and he couldn’t help it, more or less. But to be in a position where the only alternative is to rat out your brothers and sisters is not often achieved overnight. My guess is that he walked into the FBI office in San Antonio and offered to be a snitch.

Activists, just because you are not and are not intending to do anything wrong or illegal doesn’t mean you won’t be targeted! The more your contribution furthers the struggle, the better chance you will be targeted for neutralization. But don’t be paranoid, be smart! They tried many ways to neutralize the original RAG, but we were smart and we fought back. Don’t you think that now they would be happy to neutralize the ragblog, and groups like Common Ground? The day they recruited that spy, they began to recruit his replacement.

Right now we can neutralize their strike by freeing the Texas 2….Then FREE MARILYN BUCK!!

2 Responses to A Special to the Rag Blog from OneLove, Our Foreign Correspondent