A Story of Dodging the Draft in Israel 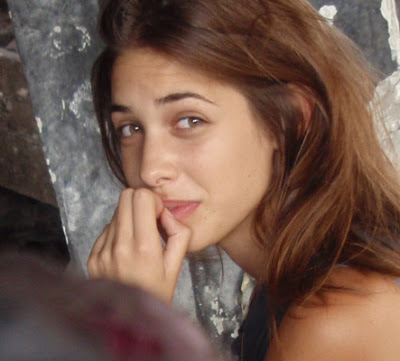 Omer Goldman is a very pretty girl, slender as a model. Never still and very restless, the expected loss of her freedom fills her with anxiety. For months before she refused to be drafted into the Israel Defence Forces she went to a psychologist every week to prepare for what was to come: incarceration in a cell in a military prison. A narrow cage for a songbird.

I met her several times during September, in an apartment, with other girls who are conscientious objectors. Together they would hand out flyers against Israel’s occupation of the West Bank and Gaza at the gates of a high school like the one she completed a year ago.

On her last day of freedom as a civilian, I saw her at the gates of the intake base to which she had received orders to report for induction for a two-year stint with the Israel Defence Forces (IDF), like every Israeli girl. But she came to refuse the draft, to be tried and to be imprisoned immediately.

Several dozen supporters showed up – ­ members of Anarchists Against the Wall, her mother and a few girlfriends – and she stayed close to them as though she were trying to delay the end, the moment when she would clash all alone with the army.

For Omer, this transition is sharper and more surprising than for most conscientious objectors: she is the daughter of the outgoing deputy head of Mossad, the man who very nearly became head of the organisation.

Omer grew up all her life in the warm bosom of a huge security establishment that has now become an enemy rather than a friend. Her father appears in the newspapers as ‘N’. He was a senior intelligence officer and then transferred to Mossad and climbed to the top until in 2007 he became the deputy to Mossad chief Meir Dagan (below), now considered the most powerful mystery man in the Israeli security establishment.

This was the time when his daughter Omer, a pampered child of the wealthy suburb Ramat Hasharon, was beginning to move away from the usual high school-to-army trajectory.

Parallel to her father’s struggle and his resignation from Mossad, Omer rebelled against the way he had paved for her and went to have a look at Palestinian life on the other side of the wall. Call this an adolescent’s rebellion against her father or a battle for the heart of a father who had left home.

She is one of about 40 high school students who signed the 2008 12th-graders’ letter. Thirty-eight years ago, the first such letter caused a huge uproar. In April 1970 students from my final year in secondary school sent a letter to the prime minister, Golda Meir, against the occupation and the war of attrition. Since then there have been other letters and the uproar has died down. But in Israel conscientious objection still arouses cold, self-righteous wrath.

Omer told me that the crucial moment of her metamorphosis occurred this year when she went to a Palestinian village where the IDF had set up a roadblock. Someone she had considered her enemy all her life stood beside her and someone who was supposed to be defending her opened fire at her.

“We were sitting by the roadside talking and soldiers came along and after a few seconds they received an order and fired gas grenades and rubber bullets at us. Then it struck me, to my astonishment, that the soldiers were following an order without thinking. For the first time in my life an Israeli soldier raised his weapon and fired at me.”

And when you told your father?

“Dad was astonished and angry that I had been there and endangered my life. After that we had conversations. He supported me as his daughter and we have a good relationship, but he is decidedly opposed to what I do and even more to my refusal to serve in the army.

“At first he thought this was a passing phase of adolescence and later he understood that this is coming from a place deep inside me. He and I have very similar characters. I, too, fight to the end for what I believe in. But we are opposites ideologically.”

When I ask more about her father, Omer smiles and does not answer. A rare moment of silence. The beauty of her smile covers for everything.

On September 23 she refused to serve in the army, was tried and was sent to prison for 21 days. Next week she will be tried again – and again until the army tires or she tires.

In two weeks’ time, my own son Noam is due to join the army and I will be accompanying him to the same base where I last saw Omer Goldman. Unlike Omer, Noam intends to do his military service. I understand them both.

This entry was posted in RagBlog and tagged Israel, Military Draft, Peace Activists. Bookmark the permalink.