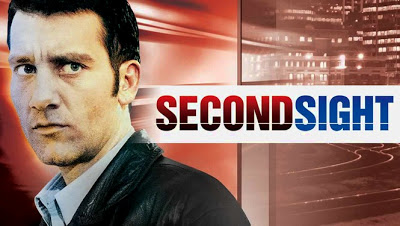 Owen plays a police chief detective who strives to solve murders while covering up the fact that he’s going blind.

Clive Owen (who was outstanding in the 1998 film Croupier, which I previously reviewed for The Rag Blog) is once again terrific in the four Second Sight TV movies that are available on DVD and Netflix.

The shows aired on PBS’s Mystery! from 1999 to 2001 and were some North Americans’ initial introduction to the handsome, rugged Englishman Clive Owen. Three of the Second Sight films were penned by talented Paula Milne, who earned two major awards for The Politician’s Wife and seven nominations for other works. Her father was blind.

In the first film, Second Sight, Detective Chief Inspector Ross Tanner (Owen) and his deputy Catherine Tully (Claire Skinner) investigate the brutal murder of a 19-year-old boy. Tanner’s skills are tested to the maximum, because he is experiencing hallucinations and a frightening loss of sight and is hiding the fact from his superiors. Tully helps him cover up his handicap.

In the second movie, Second Sight: Hide and Seek, Tanner is put in charge of The Special Murder Unit, dealing with high-profile crimes. He and his team investigate the death of a prominent violinist, and the key to solving it is getting her traumatized, non-communicative 9-year-old son, who watched the death, to open up. Prime suspects are the ex-husband and the ex-lover (Art Malik). During the case, Tully is transferred out of the unit, so Tanner needs to mislead another team member into keeping his secret.

The third film, Second Sight: Parasomnia, deals with a female sleepwalker. Her fiancée has been murdered and she is found with her nightgown covered in blood. Her father is played by the fine Brit actor Michael Kitchen.

In the final film of the series, Second Sight: In the Land of the Blind, Tanner, who continues to lose his eyesight, investigates the murder of a black youth leader. Peter Vaughn is very good as a racist gangster who has also gone blind.

In 2013, an American version of these films, set in New Orleans and starring Jason Lee and Kim Dickens, is being shot.